The Godfather, 1969: Don Corleone nodded. “Revenge is a dish that tastes best when it is cold,” he said.

IUE Calcio arrived to the home arena of Arci La Vedetta with the memory of incredible last season win still fresh in our heads.

A spectacular strike from left-back Patrick Herron decided the fixture. This year, however, it was Arci La Vedetta who finished on top and satisfied their feeling of revenge. 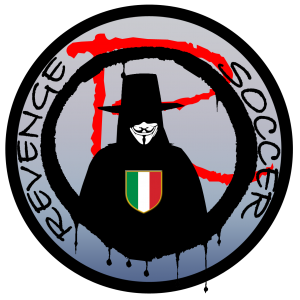 This year’s meeting between Arci La Vedetta and IUE Calcio was full of tension and subtle animosity between the teams. We came to beat the leaders; they came for revenge. From early minutes the tackles were flying with the ferocity that would make Roy Keane shiver. The cards were a matter of time. A perfect scene for the battle was thus set.
In the opening ten minutes neither of the teams managed to establish its dominance. The players on both sides of the pitch had to fight for each ball and inch of the turf. A great work rate from our midfielders and forwards helped us put their play-makers under severe pressure. Likewise, La Vedetta’s use of the breadth of the field and offensive movement caused us some problems. Also, the long-range passes unscrupulously resorted to by both teams’ defenders ensured the ball did not stay for long in the middle of the pitch.
In the first half IUE Calcio were closer to scoring. Jan “Van Guardiola” crossed the ball into La Vedetta’s box and Alberto took a goal-bound header. But the goalkeeper saved! Metin “Treno” Nebiler, who was on the rebound before the defenders, superbly steered the ball into the net. Only a split second after the incredible roar from our massive crowd of supporters the ref whistled the foul in the attack. We kept pressing forward – they responded with sweeping counterattacks. In a high-tempo first half the balance was preserved: 0-0. The overwhelming tension of the game failed to materialize in goals.
Unfortunately, during the break we found out that Frank, our battling right-back, could not continue playing through injury. Luis took place of Jan in the midfield. Jan moved to the right side for Frank. After the whistle signaling the beginning of the second half, we came determined to change the course of the match to our advantage. We started with a brisk passing game and for a moment it seemed we gained the momentum. It was to our bitter disappointment to be 1-0 down after a defensive error led to La Vedetta scoring. A further blow to our game came when Alberto, the heart and soul of the IUE Calico attack, had to leave the pitch in pain.

We did not give up and were pushing forward, though. Consequently, it did not take long until La Vedetta lost the nerve. They failed to keep their cool and the second bookable offence committed by the same player resulted in sending-off. After all, revenge is a dish best served cold. A numerical advantage meant a chance for us to rescue the game.
IUE Calcio had about 15 minutes at its disposal. We tried increasing the pace but very soon realized how much energy had already been given. Although the subs – Diego, Lorenzo, and earlier Luis – all were doing a great job, La Vedetta effectively closed the spaces and held on. Naturally, set-pieces gave us rare opportunities to threat equalising. Such an opportunity came within the last five minutes of the game. The ball was crossed from the corner and was flying all the way to the far post with Ludvig ready to tap it in. By a miraculous, some might say “irrelevant”, accident Ludvig’s knee and the ball never met. This was effectively IUE Calio’s last chance.

All in all, it was the game in which a slice of luck, as put by Frank, or a loss of focus in football terms, drew a fine line that divided the teams*[1] Anyone watching the game would probably agree it might have had a different end: 0-0, 1-1, 1-0 for us or even 2-0 for them. For justice’s sake we have to admit Arci La Vedetta were the better team and fully deserved a win. We produced a fighting performance and were unlucky not to score. In the end, it is not losing the game one can be ashamed of, it is the way the game was lost. In this respect, IUE Calcio have nothing to be ashamed of.

[1] Herman, “El Eternal” would have made it crystal clear: we were unlucky. It only takes eternity of all the time in the world to comprehend the wisdom of his words.