Another magical night at Cerreti, spettacolo puro is back!!! The premonitory words of Coach Karremans some weeks ago after our last defeat sound like music these days “Sometimes to get back to the sky, you have to get through the mud”. We are not yet in the sky, but for certain we are in the right track.

If we take a look to the last four games we see 1-0, 2-0, 4-0, 6-0, … If Fibonacci were still alive he would definitely change his sequence to match the squadra performance, where could he find more beauty? (well… maybe in the perfect chorus of our anthem live at Finnegan’s)
Lets get to the game:
Starting Lineups

The success achieved with the new formation is all merit of the Misters (IL sacro triumvirato). The formation 3-5-2 has proven to be very effective over the last games. Names have changed from match to match but the whole performance of the team has improved. The story of how they came up with this novel way to play is still a mystery, although there is one recognized theory (that is about to become a thesis in the history department after the 700 pages requirement is satisfied) that has the mister Gazza as the main character. It seems that the reason why Gazza is not seen very often in parties, Fiasco or Villa San Paolo after 6pm is because he has a secret passion to which he has devoted intensely over the last years: online chess.
Some weeks ago, after playing for more than 10 hours in an online tournament hosted by a Chinese web-page, Gazza half-awake half-sleep saw a revelation in the way his pieces were distributed in the board, and suddenly instead of the pieces he started to see our faces. His game was more or less like this:
The king, the precious character we have to protect from enemy attacks were clearly Cosimo, Rizzi or Gato. The two towers (rooks) had naturally the faces of Ludvig, Patrick and Vasyl (come back!!!) and the rest associations you can do by yourself.

The match started with high pressure from both teams and very fast moves. We were playing with more precision in our passes than Crystal Piazza. Their goalkeeper (Giuseppe) was not very good taking the goal kicks so they were trying to start always with short passes in their own side of the pitch; that decision condemned them. With our high pressure leaded by Albert and Metin they were making many mistakes playing the ball. In one of those mistakes, Vincent stole the ball close to their area, then did a beautiful “caño” to their last defender and facing their goalkeeper scored with superb class putting the ball close to the post.
The goal increased the confidence of La Squadra and the best of our players emerged in the pitch. The defense, with the novelty of Roberto playing last with this formation, was controlling all their attacks and Cosimo was extremely solvent in every freekick and long shot they manage to do in the first half. The towers were as reliable as always and the bishops (Jan and Jonas) conquered the sidelines.
Gazza was having a feast crushing and taking the ball from their midfielders and Gabo and Vincent established a strong link between our defense and the strikers. One society started to flourish in the pitch and promises a lot for the future: Jan + Metin, One of our bishops with one pawn. They did together a great run on the right hand side of our attack and made a cross to Vincent that did a petit heel pass to Gabo for the second goal. Great team play that made notorious the big difference between the two teams in the pitch.
Before the end of the first half the referee conceded us a penalty kick. A perfect opportunity to score the third goal. Our catalan striker, our “pedrito” or in this case “albertico” was the player in charge to take the penalty. He was calm and, with that much technique in his feet there was nothing to worry about. What we didn’t know is that Giuseppe (their goalkeeper) knew Albert very well, they studied together for fifteen years in a buddhist monastery at the outskirts of Girona just before coming to EUI. We could only get this picture of their class 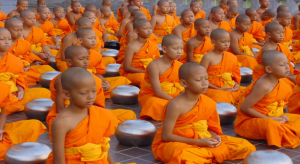 Yes, now you know the secret behind Albert’s hair. This is the first time he is allowed to have some…
So Giuseppe knew where the penalty was going to be kicked!!! One of the members of the curva recorded the whole sequence:

The second half started with a more aggressive and offensive Crystal Piazza. At the same time they were giving more spaces for counterattacks and our team was not willing to forgive that. Less than ten minutes had passed when in two consecutive plays Albert and Vincent scored two goals to liquidate our opponents and any hope they had to come back. The game was almost decided and it was time to use the top class bench we had that day: Frank came in first and then Fede and Alberto joined. The last two substitutions were Lore and me (Luis).
Alberto was obsessed with scoring more goals and made a couple of great assistances. The result: Lore scored two goals (as usual by recent events) and I gave to the opponents their only happy moment of the night when they saw me failing absurdly the easiest chance to score seen in cerreti in the recent years (the last one comparable was this one ). To my defense, I was still confused by the uncommon change of roles that I had to do that day (from lineman to striker!! – I did better as a lineman).

A night in which the national teams where playing against each other, it was the most international of all the teams that provided the true spettacolo – IUE calcio!!
|  cappotto