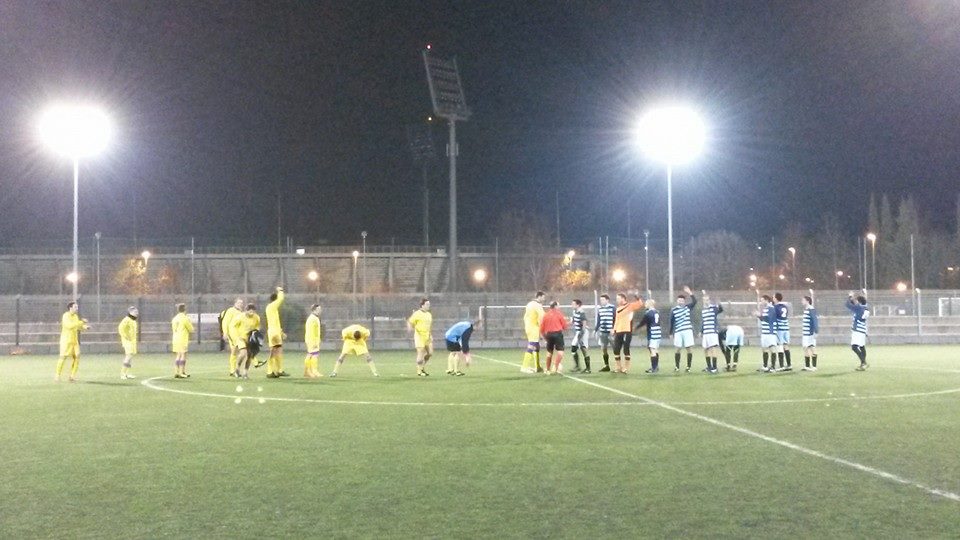 The 2014-leg of the season of IUE Calcio ended with two (relatively) undeserved defeats. The Fantasticos managed nonetheless to keep the spirit high in view of 2015. For yet unexplained reasons, the Squadra appears historically immune from the alcoholic loads of the holiday season when it comes to winning the first match of the calendar year. As far as I remember, the Squadra always won the first match of the new year.

On January 7th 2015, we thus gathered all’Affricò to play against against the Bartolinians. They immediately appeared as a rather affordable opponent, allowing us lots of counterattacks. Early in the first half we are already one goal ahead, thanks to our very own falso-dieci Alberto Il Pazzo. We kept dominating, but we did not manage to score other goals. The team began feeling frustrated, something that did not remain unnoticed to the conscientious eyes of Coach Pepe Karremans. At half time, he is the protagonist of a key speech, the highlight of which was something like:

“I don’t care if this team we play against is shit or not… BUT THEY ARE SHIT!”

The take-home message was clear: no more complaints allowed towards team-mates. Some more goals would have also been appreciated. The team is united again towards a common GOAL. Once again, the SKY was the limit. Incidentally, almost all our shots pointed to the SKY rather than the GOAL. Our traditionally strong bench started giving some breath to the more tired among our fighters. But the goal was yet far from coming. If any, they hit a post but (for once) we are lucky and stay ahead. Supposedly too sick to play, I start warming up ten minutes before the end of the match. I knew EXACTLY what to do in order to take home this match. The idea was simple: call three times for a substitution that I manage not to do for a reason or another (5 minutes lost), then get in myself for the player further away from our bench, who will hopefully take all the time in the word to say bye to the referee, the opponents’ captain and as many others as he can find (3 minutes and a half lost). The plan goes right as planned, also thanks to Alberto’s natural acting qualities. Once on the pitch, I manage to touch just one ball. Luckily, instead of losing it as usual… I deposit it somehow magically on Bomber’s right foot for the long-awaited replica of 2014’s first goal of the Squadra:

Back to victory!! 2-0!! Mouth of the match: ALBERTO IL PAZZO

A week can go away quite quickly. That one did exactly so. In no time, we were to meet again in the
Monumental Cerreti to play against insidious (yet bottom-of-the-league) Equipe 86. Finding out that I
would have been in the starting-11 got me as excited as I felt only once in my life (see YouTube link below)

The opponents demonstrate almost immediately the reasons why they’re lagging on the bottom of the
league. They are quite slow, quite fat, quite old big guys. And they had something bad to say against each other since the very beginning of the match. We contrasted them with our team-spirit, our superior skills, our lighter weight and our infinite willingness to drink Finnegan’s beer when it tastes like victory. And we had Gazza taking care of their bigger guys. We pushed them immediately inside their penalty box through a lot of free-kicks in which our towers, led by the Son of the Wind, dominated inevitably. It was just a matter of time for the first goal to arrive. And it’s by Dim Morrison! Great volè from right about the box, in the lower-left corner, 1-0! The second goal arrives only a bit later, this time (second time this year) a classic Pazzo-Goal. He penetrates in the box, a defender kicks the ball away as hard as it gets, Alberto’s head finds itself right in front of the whole thing and turns a painful “pallonata in faccia” into a 2-0 for us! There is time for another goal before the end of the first half. A perfect move “from the left to the right, from the right to the left” (cit.) in the opponents’ box by Dim Morrison got their entire defense so disoriented that he simply had to chose against who he would have kicked the ball to make it funnier. An own-goal was a sure bet, and in fact…3-0!!

The second half started as the first ended. Our Fede’s, backed up by Salvo and Reto, were ruling the wings with no mercy. Coach Karremans was leading the defense with no mercy. Carl Lewis was “simply” the Son of the Wind. At some point some of the opponents started to complain about Gazza (“MA QUANTO CAZZO CORRE QUESTO???”). Such great defensive mechanisms led Cosimo into a feeling of boredness and solitude. He had to catch up with somebody, so he decided to go for a nice run towards midfield to do something with his right heal. The outcome of all of it was as unclear as its underlying motivations. The  referee, less prone to understanding the complexities of human behaviour, just gave him a yellow card. But Cosimo assured me he had fun, so I guess it was worth it. What happened later will probably remain forever in the eyes of those who paid the (free) ticket for the match. The only thing I know is that Salvo crossed a ball from the right, some of theirs slightly changed the trajectory, and the only thing I was left with was to try a ROVESCIATA (some call it bicycle kick, some others “la chilena”). I could not see anything because I ended up falling with my ass on my head, but I bet it was (at least) as good as these ones over here:

4-0. And my first official goal in the season. The selfie-cam is ready in Capitano Lucarini’s hands, but it’s not (yet) time for celebrations. Some more goals are to be scored. The entrance of their secret weapon, (number 17, also known as Ducci Michele, born in 1961, role: pain in the ass) onto the pitch, only serves to piss off even more his own teammates. We have many chances to score again. I take one (upon gentle, perfectly calibrated assist by Dimi) to score the 5-0 from the middle of the box. I forgot to mention that their keeper was 1.50cm tall. Which is why at some point everybody started to shot from everywhere. I did hit myself the bar with a strange shot from outside the box. Notwithstanding Alberto’s screams from the bench, I decide to engage with one of the team’s favourite activities: the “Assist to Giuntini”. Unfortunately, our Florentine Ulysses seemed to have embarked in an Odissey with no happy ending. I don’t think I’ll ever forget his face when, right in front of the keeper, open goal, he hears the referee whistling because a second ball has suddenly made its evil appearance on the pitch. There is still time for the 6th goal, by Vince this time. The 15 minutes he played, he played like a ferine animal. I was more scared of him than of the entire opponents’ team. He did not want to score a goal, he had to score a goal. Our Juntinho Pernambucano offered him the chance to do so, but he remarkably failed. Yet this only made him more hungry. Indeed, the next ball he touched, it was goal. 6-0. Handshakes with the opponents, run towards our AMAZING CURVA, and the selfie of the season … 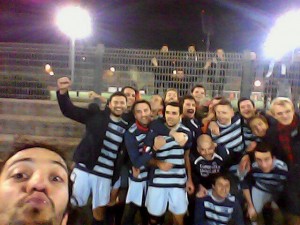 PS. At Finnegan, we were welcomed by our kind host SI-MO-NE with proper beers that taste like proper tennis-sized victory. After an epic interpretation of the hymn, and an always visionary speech by Pepe
Karremans, the Coaches decided to buy a round of shots… 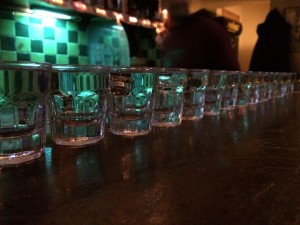 …luckily, there happened to be no Seattle around.