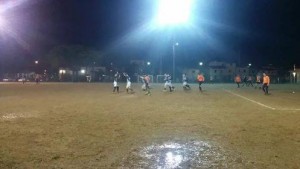 Starting Line-up
Goalie : Cosimo
Defenders : Byku, Robe, Patrick, Vasyl
Midfielders : AA, Gazza, Jan, Vincent
Strikers : Bomber, Diego
Subs : Frank, Ciacci, Lukas, Il Magnifico, Andrea
Nothing feels quite right when you come back to Florence until you get to play with the Squadra again. After an unsuccessful short-term contract with the NY Red Bulls, I found the Campioni Assolutissimi well set at the 5th position of the B1. Despite some negative results, IUE Calcio had won another victory the previous week and was pretty determined to bring back yet another 3 points from (Down to) CAMPI BISENZIO.

Yes, you can not only sing about it but also play there.

Early warnings about the state of the pitch were warranted. A pig playground, or rather a WWI battlefield was what we had to play on.  Mud-hungry Gazza expressed a deep satisfaction to find the conditions he likes in his hometown, which must be Aquila (after the terremoto). But IUE Calcio artisti knew they would not be able to develop their praised « football champagne » that day. Nevertheless, we were ready to carry that fight.

The first half started and S. Martino kept the ball for some time as we were either drowning in some lake or wondering about what a muddy girl fight would look like.  As expected, good football was unlikely to be seen as the mud hindered the progression of the ball. Both teams resorted to long kicks forward to try and get a header from the strikers.

San Martino had some decent players among which the left winger, so their game was leaning heavily on that side.  As the first half drew to an end, Albert went into some crazy dribbling of his and obtained a justified penalty kick together with a free bath. Cool, calm and collected, he did himself justice with a powerful shot close to the left post. Observers noticed that his famous hairdo did not move one bit as he did the job.

Post by IUE Calcio Squadra Fantastica.
As the second half began, we were well aware that one point was too short a lead on this kind of pitch. As I got injured in the first half, I can only provide reports about D19/10’s shower when it comes to the beginning of the second half.  Sorry if I missed any classy move. Hopefully I was just back in time to witness Cosimo’s amazing save on a very decent free kick from one of their best players: n°4.
Cosimo Vs n*4
Then Il Magnifico (aka Giuntini che cazzo fai) took it on himself to revive the interest in the game. His two-steps strategy relied first on a quasi-assist to the S. Martino player who dribbled his way to the goal and scored despite Cosimo Fuoriclasse. Unaware of Lorenzo’s next step, IUE Calcio players were quite disappointed given how hard it was to score on this pitch. But Giuntini did not care, and few minutes later, after freeing himself from a defender, he controlled the ball and kicked a beautiful shot from outside the box. The goalie was helpless, IUE Calcio cried with joy while Lorenzo quietly celebrated his goal. He later said, talking about himself in the third person,: “Giuntini’s ways are mysterious”. 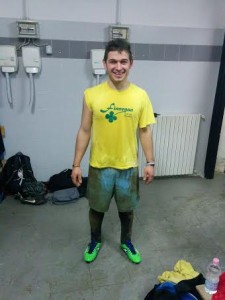 There were some chances on IUE’s side towards the end of the game. For one, their goalkeeper went out of the box for a dive and stayed stuck there. Unfortunately, the action stopped for a legitimate fuorigioco.  Overall, we made it safely to the end of the game thanks to our defensive domination in the air as well as our central midfielders’ activity.  Another win for IUE Calcio who managed to keep it cool despite very adverse conditions. For all the urbutru di merda we got last year, let’s mention that this one did a really good job.

Part of the team (others will pay a fine) later met in Finnegan’s to deliver a colourful rendition of the Squadra’s Hymn led by Mister of Ceremony Karremans. Some non-members even joined the circle, truly amazed at the spettacolo puro they had in front of them.  Metin the Great even showed up to get his ass kicked at darts. What more can you ask for?
Good to be back and Forza IUE !!