After a great game against the archrivals Accidental, IUE Calcio traveled to Sesto to face Florentia which is one of the worst teams in the league. In order to reach the 3rd place, Squadra Fantastica was very motivated to win another victory. As usual, Spettacolos met at the Piazza Liberta with Mister Jan at the driving seat of the EUI van and Andrea, the 3rd goalkeeper, had taken the co-pilot seat. The atmosphere was very calm during the trip since the game was in Sesto Fiorentino which is full of only good memories for IUE Calcio. It is in the hymn written by “the one and only” Presi, we never dropped points in this pitch, and an event which will hardly happen again, a miracle happened there; Presi and Whit mamba scored in the same game. If you couldn’t imagine the one in a million event consider Eternal not scoring a freekick, Gazza not tackling anyone in a game, Alberto not talking for 5 minutes, Patrick scoring with the right foot, Albert not touching the hair for five minutes, Byku missing a pretty lady passing by, Pimpam becoming a father or simply 20 coin tosses all coming up Heads. 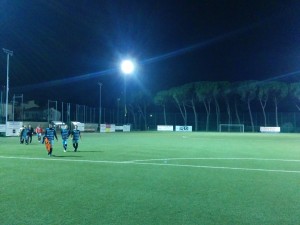 The atmosphere was pretty nice in the dressing room. A proper warm up prepared our muscles for the physical fight while the talk given by the Misters increased the focus for the game. The ritual was carried out by Mamba in the dressing room which is the honor of asking the Squadra “who are we?” while Squadra reply “IUE!!!” Simple as it is but very motivating as well. This has to be done by all Squadra players in order to be a proper Squadra player; a similar ritual to male circumcision in Turkey to become a proper adult, land diving in the Pasific Islands, fighting against the crocodiles in Papua New Guinea, or scoring a goal against Fenerbahce to be a proper Galatasaray player. Mamba took his job very seriously and did a good job!!! But more importantly, he was very happy to be announced as the linesman. He was so happy that he didn’t leave the flag for a single second even when he was going to the bathroom!!!

Finally, it was the game time. The lineup was Cosimo in goal, Ludvig, Jan, Patrick started as defenders, Frank, Gabo, Gazza, Luis, and Jonas were the 5 midfielders while Treno and Lorenzo were the two strikers. A nice pitch always brings better football and IUE Calcio has always been very happy to play in this pitch. The grass was so nice such that one Squadra Fantastica player (no name given) asked whether it is real grass or not while the other one replied it would have been mud if it was real. A high level discussion showing that Spettacolos are mentally much stronger than the opponent, starting the game 1-0.

Squadra Fantastica started the game very aggressively from the first minute. The opponent couldn’t do much, it was one way football. Everyone was fighting a lot to create chances and the strikers just kept missing the goals. The first danger came from the right wing with Frank’s pass to Lore who hit the post. 5 minutes later, 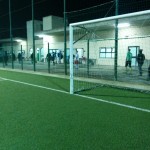 so called Treno stole the ball, he was alone with the goalkeeper but he put it 20 meters above the goal. IUE Calcio had many more chances to score, in one of them Treno hits the bar this time. The highlight of the first half was the aggressive defending against Gazza. IUE Calcio and referees are used to hear opponents’ complaints about Gazza but it was the first time that Gazza was complaining to the referee “Arbitro! Arbitro! Fallo!”. Sounds very strange but a real story. Before the half time, Patrick misses the goal badly with the right foot. It was not his fault though since his right foot does not behave well in the football pitch. Many other chances in the first half for IUE but the score didn’t change, 0-0.

After a good fight at the first half, it was time for the dressing room speech. “It was all good’ said the Misters “except we have to score” by looking at the strikers. Poor strikers were holding their heads down against the ground. It was a different strategy but motivated the strikers. 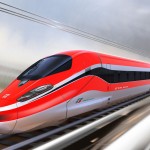 The Fantasticas started the game very aggressive at the second half as well. It didn’t take so much time for Casimo to put a perfect ball in front of Treno. The ball was fast but Treno was even faster like Frecciarossa, actually even faster than Frecciarossa; the flying train constructed by Dr. Emmett Brown to time travel. At some point it looked like Treno could reach 88mph but luckily the pitch was only 80 meters (Treno was at 2mph) so that didn’t have to travel in time 50 years to see a future where Ciacci as the new Berlusconi, Albert is playing with the last piece of hair left in his head, Mamba as the retired break dancing king up in the north, Gazza with instable shoulder due to tackling addictions, Albenese still morto (in darts), Bomber Martino doing the Hugh Hefner in one of the villas up in Fiesole. But it would have been nice to see Eternal on the pitch, taking the freekick for IUE Calcio (no need to mention that it is a goal). Going back to the game; 0-1 For IUE Calcio.

Following the goal, opponent team was increasing the aggression by every minute while Fantasticas was losing the ball possession and fighting spirit a bit. Probably, our players were amazed by the tree view behind the opponents’ goal. Passing game replaced by long balls which encouraged the Florentia players to level the game. While everyone was telling the other to keep the ball on the ground, Alberto, the Mister, was so happy with the high balls and celebrating the every high ball with a big “Oley!!!”. Probably, this is how they play football in Venezia to avoid ball to fall into the canal. With quick substitutions at the second half, the team remained fresh on the pitch (Fede, Mamba, Fran, Alexis, and Bomber came in for Lore, Frank, Jonas, Treno, and Luis). Finally, at the last minute of the game, with a great effort from Mamba to pass the ball to Gabo who passes to Bomber led the second goal. 0-2 for IUE Calcio, the final result. Spettacolos returned from Sesto again with good memories.

Good fight, good spirit, helping each other in the pitch and eventually scoring some goals were the highlights of the game for IUE Calcio!!! Last two games (2 wins 3 goals scored and 0 conceded) shows that future looks bright for the Spettacolos in their first season in B1! As the Mister says “The limit is the sky and it wears the colors of EUI”!!!!!!!!!!