Man of the Match: Albert. 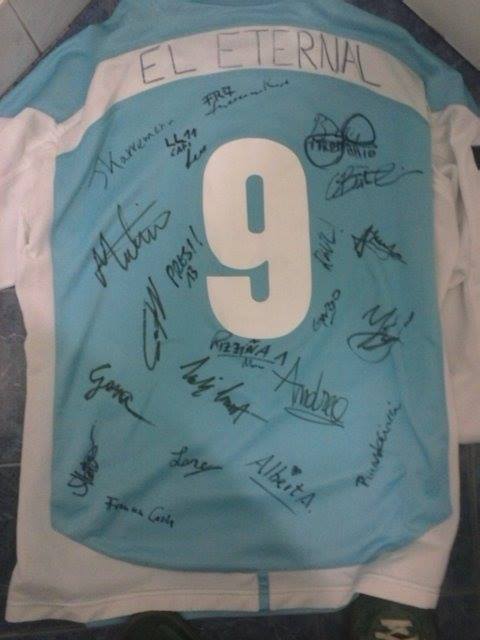 Our 9pm kick off on Tuesday night was preceded by a day full of rain. A feast of football was in store for the evening. Not only did IUE have a chance to take second place in the league but there was also the little issue of deciding which countries would get to travel to Brazil next summer for the World Cup and, of course, there was the massive, massive friendly match between Ireland and Poland. Everyone was wondering, Roy Keane back with the Irish squad as assistant manager…. is it an ingenious coup by the Irish football association or a recipe for disaster? Perhaps we would find out in Poznan this Wednesday night.

Tuesday night also saw the return to action of last season’s player of the year and IUE Calcio legend – El Eternal. It seemed like destiny that he would get a chance to again prove that no one strikes a dead ball like Eternal in this league (or any) and sure enough our new best friend, the referee (who obviously also wanted to see whether Eternal could still do it) pointed for a penalty with only a few minutes played. Cerreti fell silent, the squadra held its breath and thousands of miles away in Australia, Patrick shuddered a little knowing something special was about to happen back in Firenze. Eternal dispatched the penalty with his usual panache but, even more crucially, our friend the referee started to dismantle Equipe 86’s team by flashing cards around and before long, one of them was red. Their captain and playmaker was given the chance of taking an early shower for talking back to the ref. In truth, Equipe 86 didn’t have the wherewithal to trouble IUE with their full 11 and so this red was a serious blow.

In the second half, Metin talked back to the ref…but we’ll forgive him as some of the tackles going in were straight out of the Roy Keane book of ‘on the edge’ football. Equipe 86 were getting frustrated but out of nowhere they were handed a lifeline when our former friend the referee again pointed to the spot but this time at the wrong end, for an innocuous enough looking ball to hand incident. Even Cosimo couldn’t stop the bearded penalty taker’s shot and so it was game on at 2-1. However, the IUE came to life again and the game was off again, Albert dribbled his way into a one on one with their keeper and coolly slotted the ball past him to make it 3-1 with 25 minutes still to play. At this point it looked like Equipe 86 were dead and buried but fortune again shined on them when one of their players punted a long hopeless ball forward that was falling into the grateful arms of the IUE keeper but Marco (who had replaced Cosimo by now) was thinking about whose head he would put the kick out onto and momentarily took his eye off the ball – 3-2! IUE responded like champions and turned the screw on Equipe 86. IUE created several chances around this time, Albert could have completed his hat-trick with a difficult chance but it seemed only a matter of time and eventually it came courtesy of Leo who danced his way into the opposition box before gently lifting the ball around the onrushing keeper, cool as you like and a goal that killed any inkling of spirit remaining in Equipe 86. Some of the Roy Keane defending was bound to eventually cost Equipe 86 and sure enough with only 5 minutes left, the referee became our friend again by pointing at the spot in the correct box. With Eternal now retiring to the sideline, it was left to Rossi to show that we have more than one penalty expert and he dispatched it without any fuss – 5-2 and game over.

In summary, IUE answered all questions that Equipe 86 managed to pose and even coped with the lucky breaks that the opposition got. Vasyl, ever the professional, was completely focused on the game at hand and made some timely interventions before Equipe 86 got a sniff of an attack. The Ukrainian manager must regret not calling upon him to get them over the line in Paris. Franceso was cool, calm and collected as usual. Cosimo behind them was as assured as ever and set up some great counter attacking opportunities with his kicking from the hands. Jan, playing on the unfamiliar left, made some nice runs, providing IUE with an extra option on that side. Mc Namara on the right side of defence completed a second half nutmeg which must surely put him on Roy Keane’s radar for a call-up to the Irish squadra. Leo and Albert whipped in some dangerous crosses from either wing and were a constant threat. Their three goal contribution speaks for itself. Gazza was Gazza, always available for a pass and breaking down anything even remotely looking like a threat. Eternal fitted back into the side seamlessly and distributed the ball like only he can. Alberto tracked back tirelessly and again showed his eye for a threaded pass with some nice through balls for Lorenzo to get on the end of. Lorenzo held up the ball well and took the right options time and again. The real strength of the Squadra was in evidence again – the substitutes who come on always do so well and Wednesday night was no different. All the subs presented Equipe 86 with as many problems as those who had departed.

The latest Roy Keane era is off to a glorious start. After a stunning 3-0 win over Latvia last Friday night, the Irish team played out a spectacular 0-0 draw with Poland. Everyone left Cerreti in a hurry in order to rush home to watch the highlights of this classic game, safe in the knowledge that IUE are really starting to hit some form at this important stage of the season.

This victory has to be dedicated to the newest member of the EUI Calcio family, Hannah “pimpampina” Puy who inspired both the EUI and the French teams to victory on Tuesday night.