It was around 9pm and I was at my office staring to a bunch of nasty equations that did not want to collaborate to our research goals but I really could imagine that I was so close of some other goals. Few minutes before that Luis told me that if I want I could join him at the bench to direct the team from outside the pitch.

The match was gonna start at 9:30 pm so I still had a handful of minutes. However, since it was my birthday, I wanted to have dinner with a friend downtown and actually I was supposed to. In the middle of a big headache I checked the phone I really did not know what to do…

But sometimes in moments like these ones life simply helps you: my friend texted me he did not feel well and could not meet me to have dinner, few minutes later I just received a call from Gabo:
– Hey Riccardo, some players could not make it. Do you think you can come and join us to play tonight?

Whenever Squadra call you there is only a possible answer you can give:

– Of course man, but I gotta go back home to take my stuff so I won’t make till middle of first half.

Me happy when I got the call saying I could play with Squadra that night.

I quickly packed everything and got on my motorbike heading home as fast as I could. I arrived to Affrico around 9:45.
The Squadra was playing with our new/not-so-new 3-5-2:

GOAL! When I joined my teammates on the bench we were already leading the game 0-1, Bomber scored with an assist by Gabo.

The Squadra were playing quite confidently, our three defenders started the plays from behind passing the ball between the three of them till usually Pazzo was free to receive and open either on Vincent or Gabo.

Our wingers Fred and Jonas were helping backward whenever the other team attacked and were our extra forward when we were attacking. Ozgur and Bomber were always ready to help the team to come up, Ozgur was coming backward to help to build our offensive plays while Bomber was ready to defend the ball so that the team could come up. The other team could only shoot from outside the box or hoping that our defenders would make a mistake.

We got to halftime leading the game 0-1 but Vince got injured and was replaced by Giuntinho[1] . Hence, Ozgur moved to replace Vince’s position while Lore became our second striker. Moreover during the second half Dieter replaced Fred on our right side. Unfortunately in an apparently harmless action the other team could get a penalty: 1-1. At this time I was already warming up but I still could feel all the tension of the bench: Presi[2] got really angry, not only the penalty was not clear at all but it was their only chance so far! On top of that after a few minutes we got a clear chance to score: Gabo got into the box and crossed diagonally Giuntinho got it and immediately resent the ball to the second post where Bomber and Ozgur could not get the ball only due to bad luck.

When I was almost ready to step in to the pitch Reto called a substitution he felt some pain and did not feel to carry on playing. Luis quickly had to reorganize the team, Jonas replaced Reto backward, Giuntinho[3] replaced Jonas on the left and I got in for Reto, playing as second striker next to Bomber. After some minutes we got twice really close to score! Then Diego came in for Bomber. Once again we were all in their half of the pitch trying to attack as much as possible to get a goal.

The referee gave 3 minutes of extra time, their defenders were yelling they were feeling they almost made it… And so it happened, Gabo passed the ball to Diego at the edge of the box, Diego saw me behind him and decide to make a dummy[4] all the defenders stared at him thinking that he was going to play the ball, but he simply opened his legs and did not…

At second 3 of this video you can enjoy once again the special movement that Diego did.

GOAL! So I could sneak in and receive. I didn’t know where to shoot, but sometimes in moments like these life simply helps you: I aimed to the top corner of the goal at the left of the goalkeeper. I rolled my eyes the ball went there!! and despite their goalkeeper extending his body at his maximum level (and making a strange noise! :D) it was a goal.

So IUE calcio won, the rest are mere details. 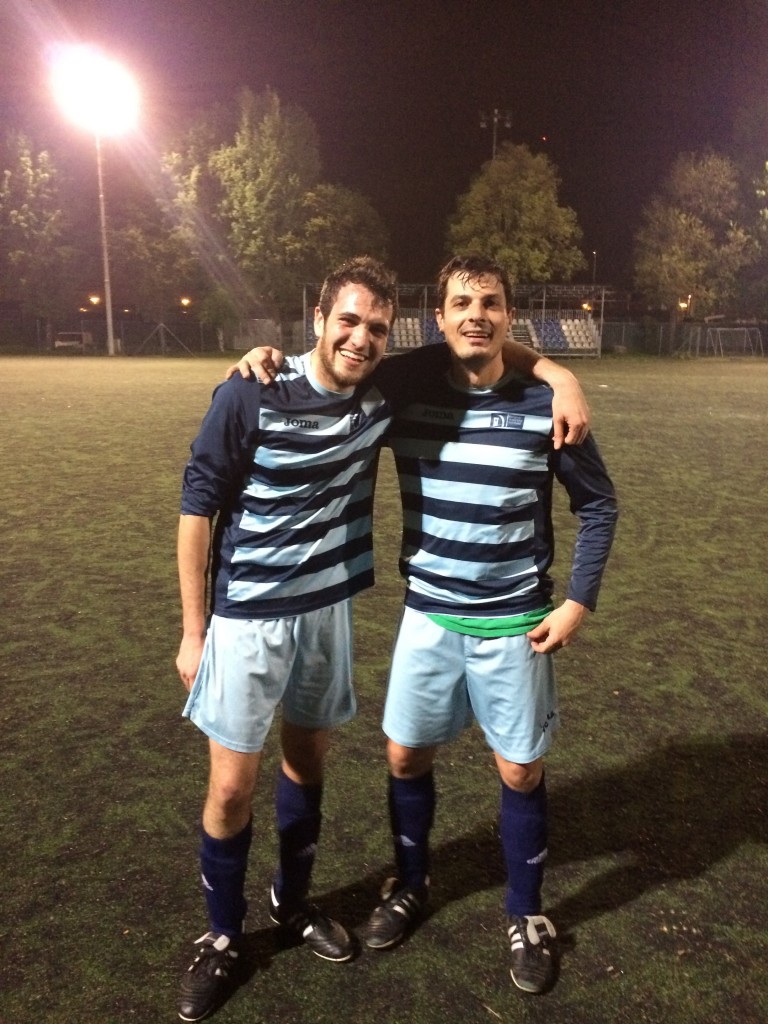 Bombers Martino and Ciacci scored the goals of the 1-2 victory, all’Affricò

[1] Anguilla dell’arno (citation needed)
[2] Un presidente c’è solo un presidente!!!
[3] Anguilla dell’arno (citation needed)
[4] I just discovered this is the English word to refer to this movement. “Dummy: skill move performed by a player receiving a pass from a teammate; the player receiving the ball will angle their body in such a way that the opponent thinks they are going to play the ball. The player will then intentionally allow the ball to run by them to a teammate close by without touching it, confusing the opponent as to which player has the ball.”