Actually, soccer is also ballet. And we know how to dance it! 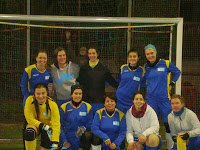 The most complicated thing to do on Tuesday was not to score goals, was not to stop the Terremotode Alcorcón (GF number 8), not even to maintain the ball fixed. The most complicated thing was to push-up the EUI-Van seat! For those who don’t know our beloved Van, everything in it is automatic, except the seats and the lights. Fortunately, the Torito of this herd did an intensive study of the Van-Manual. After some troubles and doubts of our mental capacity, the supposed elite PhD’s were on the highway to hell.

As always, our Torito-Guardiola is the best coach we can wish. He doesn’t need to ask a minute break to put some order in the herd. Always stylish, our herdsman ran the wing with the players toward the attack and kicked invisible balls when our defense was having the most difficult moments. He is our leader, our soccer-soul.

In the freezed pitch, the Curva was taking positions and glasses of wine while the team was warming up. And what a warm up! Anne (Push-up) the Ballerina showed her flexibility during stretching session. Abilities that were implemented on the pitch doing a Grand écart that almost ended with an epic ballet-stylish-goal. The poor goalie was praying every time she had to face our ballerina, 4 goals in one match. I guess is a new Record Guinness? Luckily for Great Five she was with jet-lag…

But these 4 goals don’t give her the official Capocannoniere title, is mainly a Midland conspiration (they stole her one goal on her first match). Gazelle Mira is the new supreme of the goal (5 of them)! Following the dogma of ballet is also football, a master of elegance, the Gazelle does not turn red after the sprints, it might be because she doesn’t run, she dances with the ball. One of the Turpenien-Torpedos almost broke the crossbar, luckily I wasn’t on the pitch and my face was safe.

The most difficult goal, the first one, was made by Tiger-Inken. With an amazing, astonishing, elegant, precise shot, she is applying for the Capocannoniere chair. She did a “veronica” that almost ended in the WTF-OMG-Goal of the season. Great job in the wing, she is the most complete player of the team. Always up to work in defense and to doing the exhausting job of coping with the hardest rival player, she is also pushing-up the attack and scoring. Please don’t leave us!!!

Special mention for beginners in the competition: Francesca J. performed at a great level. A nightmare for the GF defense, she was running the left wing even more than Goshua last week. Great job both in defense and attack, the luck was not with her.  But she didn’t walked alone in the wings: the Captain of the match, Elena-The Climber, recovered the ball even from the trees or net when needed. She provided the team with warm tea and prodigious sprints on the wing. 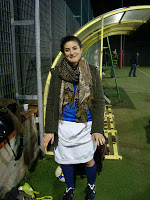 Few minutes before meeting in Le Cure, Ieva asked for a strong and safe the defense to preserve her injured finger and… it was the first match without receiving goals!! Nú(t)ria was back on the team after accomplishing with her punishment due to the chatter issue. She ran the wing, twice, she shot and fought as the Mad Nutria she is. Marilú should improve her Stasi Style, Nú(t)ria is creating a whole new tendency in defense. But the 0 goals from Great Five were not due only to Nú(t)ria’s performance. Gambetta Alessia was cold, very cold, praying for a blanket. But, once she recovered from the winter-is-here moment she ruled the defense. Secure and fast, always polite and with fair play, she stopped any hope for the Great Five honor goal. With Gambetta on the pitch, Ieva’s injured finger was safe. Gemma was also contributing to our goalie welfare. No one surpassed her, not the dribbling-girl of GF, not even the Terremoto de Alcorcón, they had nothing to do. I can only say that with this defense, the championship is ours.

And our goalie: Ieva the Word. She was injured, but you won’t notice. After two moments of panic for the bench, when she was starting to walk with the ball on her hands outside the box, she learned the lesson. Secure and confident, she maintained the goal at 0, risking her wellbeing and loosing some time when it was white ball… a professional work!

And then it was me, Von Darth Vader, the one with multiple names, my frustration was translated in an internal shout of VafanculoPorcaTroiaAreYouKiddingMe?! I ran half of the pitch alone to see how the goalkeeper stops my shot. Although I had great opportunities none of them was translated in a goal. I can get no satisfaction… well just one: the coach of the other team was quite rude and stupid, so I thought he deserves a kick. I did a sprint knowing that I won’t save the ball but I can kick him with it. It was my glorious moment of the match. 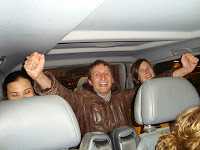 The Curva was simply the best. With Marilú Capitan and Commander taking care of Hamster Tirinnanzi and the wine; with Goshua as the happiest mascot in the world with his ball and a new tiny-doggie-fan; with Jan the Poet singing We are here for the Cows and a beer in his hand; with Scott-Ballarina’s-Boyfriend inspiring the push-up way of soccer; with Elisa taking notes of the epic fails of the referee, and with Gemma’s Boyfriend making sure that we arrive to the pitch on time, they were our guide. The passion for this team made our Hamster fall down, or it might the passion for the wine? This is not yet clear. With this curva, the Mad Cows never walk alone.