All for one and one for all, united we stand divided we fall 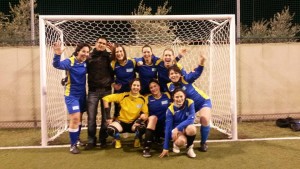 There have been epic moments in history of the Cows but, if there is a battle we can explain to our future vitellos, is the one that ocurred last Wednesday. As always, the Cows arrived “a bit late” to the meeting point; as always, we were talking in the changing room, asking for the wine and cakes, and being VERY slow putting on our combat outfit. Against Quinto Alto we have played our worst but also our best. We didn’t won, but this time we lost with honor and team spirit. 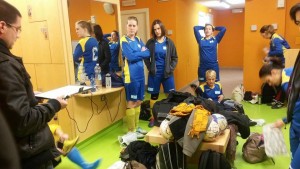 Few minutes before the game Torito enlightened us with his wisdom in the changing room (EVERYONE was dressed, dirty minds). It seems that Epiphany visited him the night before, probably due to a Nutella-crêpe-sugar-shot, and he explained us the 3-1 strategy to beat the champion of the league. After that, the game started with a wonderful catenaccio commanded by Gazelle Miracolo, who was not only the Capocannoniere but also the master of our defense. Coming back to her origins in football, she performed exquisite as the organizer of our game, connecting attack and defense. Surprisingly, she totally forgot her Finnish manners, and yelled and shouted commands to every single player on the pitch. Commands that we appreciated because, honoring our name, we always suffer from few minutes of craziness on the pitch. However, after the game she came back to her Finnish kindness and apologized to EVERYONE several times.

In the attack was Anne PushUp-PushUp. Well, in the attack and in defense, basically in every place. Stealing balls, running up and down and despairing Quinto Alto’s coach, who didn’t know what to do to stop her association with Gazelle. She was always there to catch the passes from defense and did magic with them. Her shouts of PUSH-UP GIRLS were listened again all over the pitch and she was also up to help in defense. In the attack was, also, Ghiaccio Loredanna. She has improved her sync with the herd in the trainings and you can see her improvements during the games. She was our wild animal on the pitch and helped a lot in defense with strength and forcefulness. 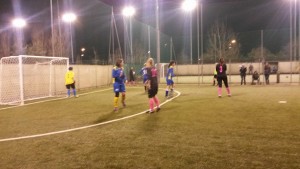 In defense was THE REST OF THE TEAM, and Nú(t)ria is starting to worry because the defense performed amazingly. We started with the Darth-Vader-Corleone family in wings. With the dark side working together commanded by the Godmother-Turpeinen, our goalie Mano Larga was more or less safe. Little Asfalta-Skywalker did a solid defense and ¿faked? a foul. She was a bit outraged with the herd when we didn’t believe her rolling on the pitch. But, we are improving in our reactions, at last we didn’t laugh! This time, Blonde Torita Sanne was in defense spreading her wings away from her beloved crossbar. She sacrificed her favorite position in the attack to work hard in defense, doing a great job taking care of the right area of our defense. Trying to not mess much and especially trying to not score an auto-goal was Darth Vader who, after running up to one single attack and coming back to defense was ready to die because of the lack of breath. Still, I managed to arrive to my position just on time. I must say that, I really appreciate the cheering from Torito saying “don’t worry you’ll arrive” and the “Laia are you ok?!” afterwards. After 4 months of absence and contributing to our defense was Elisa Collina Piras, who ran up and down on the pitch and contributed in our epic resistance against the Champions of the League. 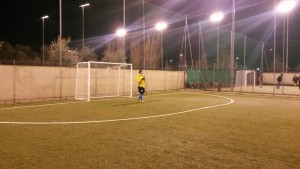 Last but not least our goalie Nú(t)ria Mano Larga. First time as a goalie and she did an exquisite job, we were so worried about her after the few goals that we started to comfort her, but she really didn’t need it. However, she managed to freak out Torito when she touched the ball with the hand after a pass from our defense. Still, great job, great attitude (maybe a bit stressed) and brilliant Mano Larga, not even one goal between the legs!

In the curva was Bea the Miracle, who decided to be in the bench, comforting the team and giving us some advices. Magalí-Patatine &Co. were cheering the herd, challenging the Curva di Lusso, and saying all the bad words learned.

Finally, I think that most of us agree about the improvements of the team, both individually and as a whole. We are more coordinated, we know where others are and we sacrifice our favorite positions to help the herd. But not only the players have improved, our Coach has increased his wisdom in calcetto, if we have reached this point is thanks to his patience and inspiration. The 3-1 strategy was the key of the game, and Torito was, once again our guide on the pitch.