And another one bites the dust!

On Monday [3rd March] the cows were conscious that the match would be hard, that the pitch would be a battlefield and that we would have a hard time. What we didn’t expect is to have AGAIN the referee Testa di Cazzo, who seems to be especially obsessed with us. With him on the pitch is impossible to don’t do fouls: they hit you? Well, it was YOU who put the face in her elbow; you are complaining about a foul? It is because you are such a princess and defiant player. The B.B’s. Theater Company was falling all over the pitch, performing an amazing theater play.

But in the battlefield is where teams are built. Covering each other’s back and ready to kick anyone who dared to touch our herd, we fought each ball, we played amazing and we were, again, more than a team. Leading this herd was Torito el Potro de Badalona who showed his disappointment and made the best use of Italian and Spanish parolacce. Still, he tried to maintain the calm and don’t kill anyone. It was a huge effort and he sort of succeeded, until the corridor on the way to the changing room, where the coach of bitches was insulting our little child and of course he can’t allow this shit.

Despite the kicks and mean rivals, the herd succeeded in the task: WE WON THE FORTH GAME IN A ROW!!! And to commemorate it, we score 4 times. The Capoconinere of the game was…. (Start the bets, who can be? Who would score? What a tension!!! Gazelle Miracolo! (yeah, who would have guessed, eh?). The reporter with a trade union that protects Nordic rights but exploits poor Spaniards scored twice and maintained the calm when some of the bitches pushed and hunted her quite aggressively. Gazelle is also improving the passes each week and I was very glad, but surprised, to get the ball, so I was always a bit slow in the reaction. Still, she maintained her generous passes (maybe she mistook me with Tiger?) and helped in defense, attack and, if you allow her, she would be the goalie! Fighting for the Capocannoniere is also Hamster Tirinnanzi, who was one of the most kicked players, yet, she never faked a foul (are you really Italian?!), although she didn’t really have to, because they were actively trying to kill her. She also managed to control her temper (most of the game) and score a very nice goal. The only moment of confusion was when the light was gone, and she was a bit puzzle by her shadow. And the third capo is… Anne PushUp-PushUp! We knew about her amazing aim, she has 11 goals in her personal account, but on Monday we discovered her theater skills. With an injured ankle, she was defending carefully but secure. She understood perfectly the wise words from Torito, who encourage us to be more princesses and less cows, to basically be Italian . She was nominated for a drama queen Oscar after faking one foul quite exaggeratedly.

In the attack was also Torita Sanne, who showed that we actually speak Italian and argue with the bitches and referee in fluent Italian. LA PALLA SU LA LINEEEAAAA ARBITRO was her dogma. Running up and down, reminding the referee that he also has to count the fouls of the bitches and, of course being the queen of the second crossbar, she didn’t had the prize of the goal, but she was close to it. And now, the words of a proud mum… My little Corleone, the Fantastica Asfaltatrice stopped the game. Literally. She was so pissed off, so FUCK THIS SHIT! that she started to say all the bad words (she learned them in school, I don’t have anything to do with it) shouting desperate because of referee’s stupidity. After showing us her Italian side, the director of B.B’s Theater Company and his actresses left the pitch. They said it was because we were faking fouls, playing dirty and provoking them. The truth is that they were useless; unable to do more than two passes or shot to our fantastic goalie without the help of the referee.

Aiming for the red card and the Oscar for the best comedy actress was Darth Vader. I was close, but AS ALWAYS the crossbar was in the fucking middle, or the goalie or some phantom that steal the ball from my feet just when I was about to shot. I also contributed to the “be italian” dogma but my theater performance lost credibility because ALL THE TEAM was laughing after my shout of pain. My laments in Spanish were confused by insults and this lead to the second round battle on the changing room corridor, with the very mean and quite aggressive coach of the bitches. Lucky us, Torito came and showed his Bravura, arguing with THREE coaches at the same time.

The defense was S-U-B-L-I-M-E, wonderful, magic, simply the best. Stopping all the balls, almost leaving their lives in the pitch, praying for their safety and trying to don’t kill the referee. Nú(t)ria Mano Larga and Gemma the Choreographer were there to destroy their passes, but also to construct our game. We always appreciate our attack, but the key of our victories is in the defense. Nú(t)ria Mano Larga showed her self-control when all the fouls she received were transformed in fouls against us. She did the best in each action (even showing off her skills with the ball just in front of the box), she fought each ball and defended or area inch by inch. She almost lost her leg on the battle… but she survived. Next to her was Gemma The Choreographer, constructing our attack from the back, controlling the rhythm of the game and the rhythm of the changing room, showing us some new steps for the Mad Cows choreography. Both of them are so coordinated, so sync, that we even confuse them on the pitch!

Last but not least Ieva the Word. She was concentrated, injured (we saw the bruise on her finger during post match lunch) and stopping each ball that approached to our box. She even had the satisfaction of kicking one of the actresses which supposed a double penalty that, of course, she stopped. No matter how much they wanted to fake fouls to get the penalties, because Ieva stopped every single shot. But she is not only the goalie, she is also an amazing assistant, that provided with dangerous balls to our attack. 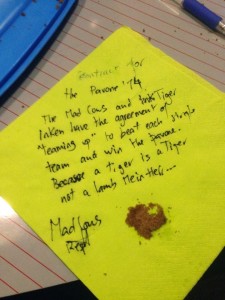 We also had the support of the most numerous curva we ever had! Jan The Poet and Marilú Captain and Commander were leading the anthems. We had the Danish child of Torito and Nú(t)ria, two boyfriends and two lost economists (they are not used to visit “the city”, you know, only VSP is in their Navigator). But the curva had an important member of the herd who is leaving us. We had to say “goodbye” to our Tiger. She has to go back to Germany, although she can apply to the Italian nationality due to her progress in the language. The herd was devastated in the changing room when Nú(t)ria told us that she won’t play the last game with us. We were doing passes were she was supposed to be, to notice that… she was not there! After the initial shock, and holding back tears due to the sadness, we keep playing. I think everyone will agree that we are going to miss a lot our Tiger and Nutella Monster. But there are good news, she signed a contract with cake to come back and play the Pavone’14 with us. And if a contract in a napkin worked for Messi and Barça, it should work for the Cows and Tiger. See you in June, ready to break some balls.