Villa Salviati & the History of Calcio in Florence

Calcio Fiorentino, and its modern reincarnation as Calcio Storico, is widely considered as the forerunner of modern football. This sport was played by Florentine people on open spaces within the city walls before it was institutionalized by the Medici rulers who moved it to the square in Santa Croce in the 16th century. Less known are the historical links between Calcio Fiorentino and the Badia Fiesolana.

Unlike popular myth, England is not the motherland of football. It was indeed English merchants who got to know a sport called “calcio” in Livorno in the late 18th century. This sport had originated in Florence since at least the 14th century. The English merchant not only learned to play Calcio in Livorno, they later took it back into their home country, initiating the rise of the world-wide most popular sport in modern times. 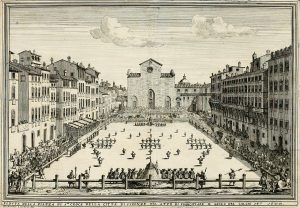 A match of Calcio Fiorentino played on Piazza Santa Croce in 1688; Wikipedia.org.

While the on-pitch appearance of the IUE Calcio football team oftentimes resembles more the ancient form of Calcio Fiorentino rather than the modern English form, and some EUI Researchers, among those the author of this blog, are ardent supporters of the “Rossi”, the area known as Badia Fiesolana also plays its part in the history of the sport when Calcio Fiorentino was played at Villa Salviati.

In the mid-17th century, the once popular sport had lost its Republican ethos and tumbled into crisis. The Medici, financially potent promoters of the sport, had tightened its grip on the game, and, thus, the popular interest faded while the game Calcio turned into a Medici-controlled event.

In an attempt to revive interest for Calcio Fiorentino, Orazio Capponi organized a match to promote Calcio. The promotional match was played at Villa Salviati on 26 February 1673. Pietro di Lorenzo Bini writes in his 1688 published Memorie del Calcio Fiorentino that the costs of the match were shared equally by all participants. This sharing of expenses should revive the spirit of “common responsibility” for the Calcio.

Before the kick-off, a lunch was served at Ponte alla Badia – if this lunch is today more resembled by Cherlot’s Moroccan cuisine or Adrian’s pizzas at l’Antica Badia is still disputed among local historians. In any case, eighty-nine Florentine noblemen and “five foreigners” took part in the lunch. Each of the Florentine participants paid “seven Lire, one Soldo, and two Quattrini” for the lunch.

As described in his history of Florentine Football: The Renaissance of the Game, Horst Bredekamp writes that after the lunch, all participants of the lunch moved to the Villa of Jacopo Salviati, “near the Badia Fiesolana where the youngest of the participants played a match of Calcio.” In the evening, Bini tells, “everyone, full of joy due to this revival, returned back to the city.” Because of the success of the day, another Calcio match was played at Villa Salviati the following year.

Nowadays, every June, a tournament of four Calcio teams representing the four historical quarters of Florence, is played at Santa Croce. The modern tournament re-enacts a Calcio match played by the people of Florence during the eleven-month siege of the city by troops of the Holy Roman Empire and the Papal State in 1530. 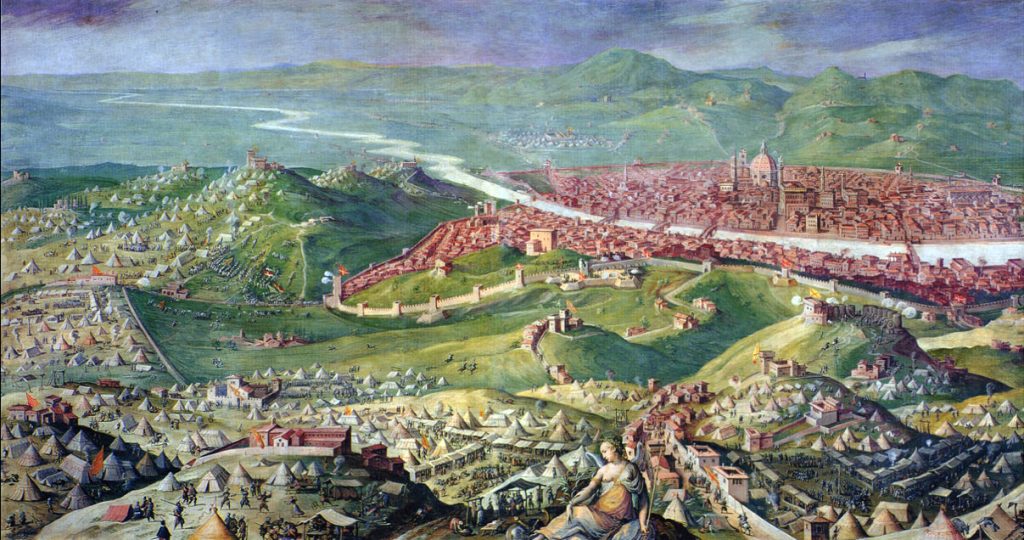 The Siege of Florence by Giorgio Vasari, 1558; Wikipedia.org.