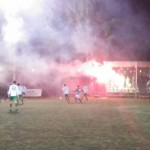 Campo di marte won the previous two games and is now leading the league, on the other side IUE comes from an unlucky defeat and a stupid draw.
US Affrico bleachers are crowded by Campo di Marte supporters (probably the best curva of whole AICS) and as usual they start to support their team with fireworks smoke bombs and stadium chants. 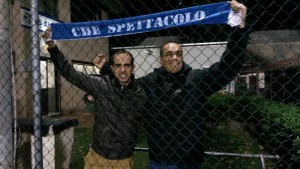 Campo di Marte started very aggressivly pushing the squadra on it’s midfield but IUE reacts closing all the available spaces.
Around the 10″ Karremans starts a counterattack: long vertical ball to Lore. Campo di Marte defender and their goalkeeper frightened by the presence of “l’ anguilla dell’ Arno” aka Giuntiño go panic and leave the space free to score an easy goal.That’s has been the perfect moment to score a goal. Campo di Marte psicologically suffered the blow and started to react in a nervous and chaotic way by personal initiatives.

Now a more calm and confident IUE continued to attack with two simple tecniques: defence and long vertical balls and up pressing. Those two simple strategies seems to work very well.Campo di marte soffered the high pressing and losing the ball gave some chances to Fede and Diego and Pazzo to enter the box and try some personal incursion to the goal.

But the best chanche to score the second goal is coming closer. Lore around the 20″ receives a perfect ball from his right side from Vincent (who gained 20 points is “passage to Giuntini” skill) but misses completely the target. Few minutes after, around 30″, Lore had the chance to repair the mistake with an unespected shoot (tiro che non ti aspetti) from outside the box. The ball was rightly addressed to the side of the goal but the goalkeeper took it and sent it in corner.

The first half ends with a very bad fault against Pazzo that now injured has soon to leave the battle field. 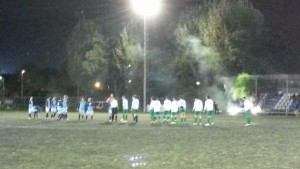 Now It’s a moment of high sacrifice for the squadra, trying to devend the partial result.
The squadra’s gameplay without his playmaker Pazzo started to suffer more on the midfield but the succeded player Luis fought like a lion on every ball.

Then comes other subs: Bomber for Lore, Ciacci for Diego (who played like a fake 10, sacrificed all the game to block a specific opponent)

Adount the 50″ another crucial episode. Campo di Marte gained a free kick at the limit of the box. They soot and Bang! it’s just the sound of the horizontal post! So Luckly for Cosimo and the rest of the team the result is still 0-1!

Now the game became very fisical. The referre was goint to lose the control of the game and started to give yellow card randomly (even to the Novegian Nobel price for Peace winner Jonas)
Aroun the 60″ a great chance to close the game: great pass from Reto to Dieter on the left, then cross in the middle where Ciacci is alone in front of the goal ready to score again against his favourite opponet. There was only one problem: he was on offside and the action is now stopped by the referee while bomber complaining, was still waiting for the ball in a regular position.

Around the 65″ the game is still open and just a lucky episode can bring Campo di marte to score. But is now the turn of Vincent, that from a confused and chaotic situation inside Campo di Marte box, takes the ball and shoots with his left foot: 2-0. Perfect timing again! Presi Diri Elie and the rest of the curva are now on exstasis. 15 minutes are not enought to change the final result.

Briefly: IUE Calcio reaches the first victory of the season against a very good team thanks to a game of sacrifice and some luck.

Pros: integration of the new players and the subs scheduling this time worked so mutch better
Cons: IUE cannot still impose it’s gameplay as it was use to do it.

But who cares! Now we are now “bound for glory” (as Coach Karremans said on his speech at Finnegans)