Real Madrid and Barcelona and their galaxy of stars might be able to walk through Osasuna on a sunny Spanish afternoon, but would they show up on a cold Tuesday night in Stoke? For some fans of English football, a midweek trip to Stoke in the winter months has come to symbolise the ultimate test of footballing will. When the temperatures are low, the wind swirling, the home curva bouncing and the opponents in your face, how much do you really want it?[1]

Last night, our own Stadio Ceretti had all these ingredients, and high-flying AS Quona were in town. Second at the start of play, this was a chance for our opponents to underscore their title ambitions. For IUE Calcio’s Squadra Fantastica, it was an opportunity to shake off our Chianti hangover and start 2017 as we mean to go on: with a win.

In the dressing room prior to kick-off, Dej presented Jan with the captain’s armband and Mister Allenatore Olli gave the team a pep (Guardiola) talk, which, if a little lighter on tactical nuance, was certainly reminiscent ofs the Catalan’s style: a cream trench coat and leather glove combination showing us all he meant business. “Stay calm, don’t talk to the referee”, said Olli, fully aware that he would soon be jumping around and screaming ‘DAIIIIIIIIII ABITROOOOOO!’ from the touchline. Our injured and croaky Total Voetballer Jonathan then dispensed some sage advice of his own and after a pumped up huddle, we were ready to go. 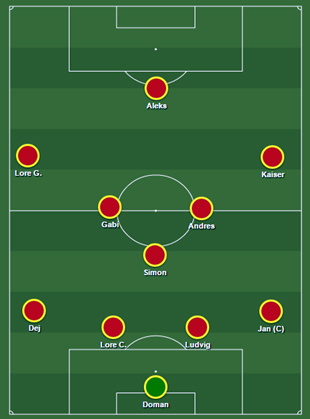 Quona came out the blocks fast, creating an early chance and catching us cold (quite literally, the temperature was around 0°C at the start of play). Some might put our sluggishness down to Christmas excess and a lack of match practice, save a hasty five-man SchifaNou Sunday session. But we like to think that we lulled our opponents into a false sense of superiority, and so it proved for most of the rest of the half.

After the first 5 minutes, our much changed line-up settled and started to take control of the game. Coppa Pavone 2016 finalista Lorenzo Cicchi made his debut alongside the experienced Ludvig in central defence, and the Big Ls quickly formed a formidable partnership, calmly snuffing out occasional threatening counter attacks.

In midfield, Simon and Andres battled an imposing geezer reminiscent of 90s NBA star Vlade Divac, both facially and in stature. Their #11 showed surprising finesse ‘for a big man’, his legs screening what felt at times like a 20 metre radius. But after 15 minutes our swift interplay in the middle of the park proved too much as Simon broke forward, played a one-two with resident trickster Gabi and chipped a cross for the onrushing Aleks, who just couldn’t quite keep his header down. Simon followed this up with an ambitious 30 metre volley which worked the ‘keeper. Now the ball was rolling. 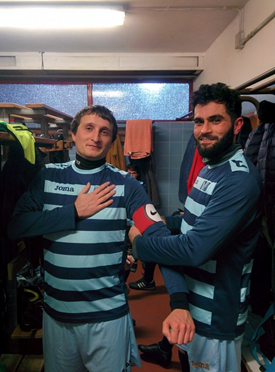 The Giving of the Armband

Outnumbered but not outgunned, Aleks led the line aggressively throughout, his pressure on the Quona defenders already having forced an opening for Kaiser, who was having a busy game on the right and linking up well with ‘Il Capitano’ Karremans. Fresh off the motorway from his pilgrimage south, Kaiser had earlier flashed a left-foot shot past the post in the early exchanges. A knock was soothed by some magic spray and the man in the mystical Scandicci boots played on.

An array of beanie hats, scarves and snoods hinted that Quona might have had a soft underbelly, and Captain Jan Claude van Damme tested their toughness by laying out his man with a sharp elbow on 35 minutes (Highlights). How intentional this move was only Jan knows, but it’s safe to say Marouane Fellaini would have been proud. Meanwhile, as Tim planked, most of the rest of the bench stayed, sotto coperta, shivering in the dugout. On the stroke of half time, a Quona set piece routine forced ‘Mr. Unbeatable’ Doman into a sharp save, as both teams went into the break believing they could snatch the three points 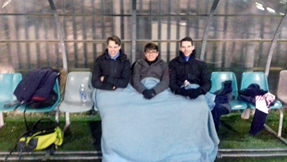 There was just one substitution at the break, with Tim replacing Dej. Dreaming of replicating absolute screamers scored recently in training, both our left-backs went on adventurous runs and kept their opposite numbers busy throughout the game. The second-half started cagily, though, with Quona’s Captain and #6 spurning a decent counter and Doman commanding his box well (“…KEEPER’S!”). After 10 minutes, David replaced Kaiser on the right, and kept up the pressure with some direct dribbling. The midfield trio of Andres, Gabi and Simon were exerting ever greater control, but Quona still looked lively on the break. Joe replaced Jan at right-back on 55 minutes and Ludvig took the captain’s armband as both teams probed for the opening goal.

On 65 minutes, it eventually came. After a corner broke down, David closed in on the Quona left-back and pressured with Gabi to earn a throw in a dangerous area. Like Rory Delap at Stoke circa 2010, our flying Franco-Italian briefly wound up for a long one. But unlike Stoke circa 2010 we in the Squadra Fantastica can also play another way. And so David tossed a short throw to Joe, who took a touch and flashed the ball across the 6 yard box for the arriving Lorenzo ‘He scores when he wants’ Giuntini to stroke home. Cue wild scenes, as IUE players stormed our ecstatic four-man curva and the bench flooded the pitch. Joe was confused: on the one hand he felt delighted, on the other he was terrified of the team becoming a viral hit on YouTube after being hit by a quick restart. This led to a snaking run first in the general direction of the curva and then swiftly back to into position with only minimal celebrations for the assister. “GET BACK! TURN AND FACE! CONCENTRATION LADS!” and any number of other football words and clichés followed 30 seconds of elation.

The last 15 minutes of the game can fairly be described as bumclenchingly tense. Quona, who might otherwise have settled for a draw, now bombed forward, peppering Doman and lobbing balls from all angles into our box in search of an equaliser. Our early year fitness lagging, we defended in committed (and sometimes desperate) fashion, kicking, heading and punching ball after ball away. ‘Mr. Unbreakable’ Doman didn’t flinch on 70 minutes as he caught a through ball and smashed into an opposition sub who was reduced to tears by the force of the impact (Highlights). Che portiere! Che corragio! Josh ‘Sam Vokes’ Edwards made his Squadra bow in dramatic circumstances, replacing Aleks up top for the last 20 minutes and providing a vital outlet for our defensive clearances. He won headers, ran channels and on one occasion, sent a defender sprawling in a tussle which demonstrated the merits of all of those hours in the gym. No goal just yet, and thus no free round for the rest of us in Finnegan’s, but the Welshman can be more than happy with his first taste of league action. 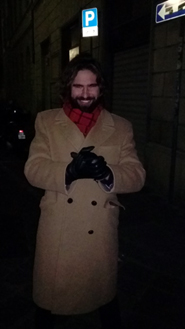 When the full-time whistle went, our overriding emotions were joy and relief. The giocatori, led by shirtless match winner Giuntinho, serenaded our freezing but brilliantly devoted tifosi (props to Diarra, Sam, Adam ‘Scorsese’, Özgür (get better soon)). Meanwhile, the dejected Quona players trudged off back to the Far East (Pontassieve) for a consolation meal at their sponsor, the ironically named ‘Far West Pizzeria’. Trip Advisor gives that place a 4/5, and on balance I’d give their team a similar rating. Overall it was a good (mostly) clean match, keenly contested and well officiated. We’ve got our Antica Badia, which we know is always 5/5, and that’s also the rating I’d give the team last night. Not because we played a perfect match – we can play better – but because of the result we achieved given the circumstances. Onto the next match with the wind in our sails, and as we supporters of non-Premier League English teams sing (sort of):

[1] The stats show that the whole Stoke away in midweek thing is a myth; it is far from the hardest fixture. But who are we as social scientists to let facts get in the way of a good story? 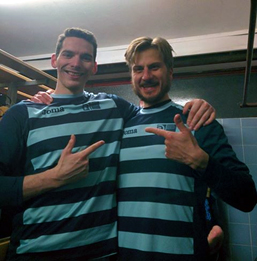