Going through the mud, to get back to the sky

Sometimes, to get back to the sky, you have to get through the mud. The Squadra is now going through the mud. Last wednesday’s game was a low point in terms of results: 2nd defeat in a row, both with 2-0 score. It is true that in both games luck has not been on our side, but fact are facts: 2 games, 0 points, 4 goals received, 0 goals scored.

Winter is traditionally a difficult period, for any team. Also last year, in the magic 2012-2013 season, the Squadra faced a hard time trying to win every game in order to stay on top of the league. This year the challenges are a bit bigger and the top of the league is now, at this point, very far away, probably too far to look at. This is certainly not a scandal: it’s our first season in B1 and until two weeks ago we had all the rights to claim that we are doing very well. We still have this right, but in order to maintain it, it is important to hold tight, learn from our mistakes, and make the most out of the second part of the season.

During the game on wednesday we have shown in various instances that we have the potential to play really-really well. The most illuminating example is of course the amazing action in which the ball was first gradually passed from our left-back Simon to our right-back Ludvig and then, after a series of combinations, Ludvig arrived with the ball at the end of the right side-line, crossed it, and Gabo’s shot missed the goal by just a few centemeters. These are the kind of things that the Squadra can di and that make us be the Squadra Fantastica.

Then, what went wrong? Unfortunately we were not able to get control of the match, and we consequentially had to adapt to the opponent’s style of playing: long balls, headers and ‘situation-football’. The goals we received were in fact the result of two unfortunate situations: the best example is the second goal, where one of our defenders tried to deviate a long pass but then unintentionally surprised our goalkeeper. These are unfortunate situations, but the likelihood of their occurrence increases as soon as we lose control of the game.

Why did we lose control of the game? It is obvious that we are facing some problems in the midfield. The gap left by Castra’s departure is not easy to fill, Alberto “Il Pazzo” is facing an annoying injury and the engine of the team, Gazza, was disqualified for this game. A lack of structure in the midfield thus makes everything more difficult and unfortunately the efforts of Luis and me were not enough.

But doesn’t matter. The great training attendance and the intensity of the trainings are fantastic and I am sure this will result in a great second part of the season. Losing is part of the game and every defeat should make us stronger. Soon we will be again be strong enough to win and to get out of the mud and back up to the sky. Hopefully, or better, I am almost sure, this is already going to be the case in our next game on tuesday. And in any case, whatever will happen, remember Presi’s words at the beginning of the season

Being part of the Squadra is the best thing you can happen while being at the EUI! 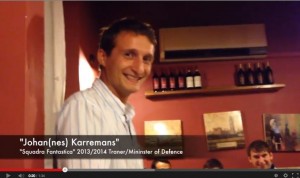