I love this game too much for this shit… 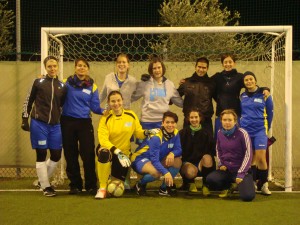 On Wednesday the 4th, the Mad Cows played wonderful and show to the Libertas Bitches Rugby Club [LBRC] how to play soccer, because the best revenge is not to be like your enemy (Marcus Aurelius) . However, they were committed in playing a mix of rugby and kickboxing and they won 3-4. Their strategy, allowed by the referee Testa di Cazzo [TdC], was clear: to injure us (especially to Gazelle Mira and Tiger Inken) so we cannot play the rest of the match. But they forgot something: we are warriors and survivors, we answer with soccer and we showed our “I’m going to kill you bitch” face.

Torito was jumping into the pitch, showing his bravura, confronting TdC and bitch number 6. He felt our pain, he shared our frustration with such carnage. Our Capocannoniere, Gazelle Mira answered to each provocation, kick and attempt of murder with an outstanding occasion and 3 goals. But is difficult to play soccer when you have a herd of bitches hunting you without any mercy. She tried hard and she didn’t lose the nerves. The Nobel Prize of peace should be for her. None of us would be so peaceful in this situation. Tiger Inken was the second most pissed off player of the night, LBRC made her fly and the TdC tried to confuse her with a strange language… maybe Esperanto? Despite the several attempts of murder, she had astonishing opportunities, but when you’re fighting to survive, playing soccer is hard.

Sanne provided us with strength and some kicks to the number 6, she deserved, every single one. With her hockey attitude and shinpads she was prepared for the war, she started saying sorry for some kicks, she ended showing no mercy. Her loyal torita, Hanna, was back on the pitch. She showed that even after two weeks without training with us she still have a warrior attitude. For fist time, she was playing as a defensive wing, and she implemented the “you shall not pass” dogma. It was the first time for Elisa, our referee was astonished with the messy TdC. However, she manage to overcome this initial shock to provide our left wing with sprints and she acted as a Google translate when the referee was talking in Esperanto to Inken. Loredana Ghiaccio–Animal provided us with attitude and warrior spirit. She was not as aggressive as she can be, but at the end she is a Mad Cow, not a rugby player, she is one of us and wants to play soccer, not kickboxing. 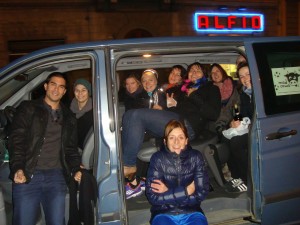 The defense was supreme, secure, hard and precise, in one word: dynamite. Marilú Captain and Commander flew in the middle of the pitch, victim of the bitch number 6. She survived, and showed to LBRC how to defend without murdering anyone (maybe at the end it was a half attempt of murdering bitch number 8, but it was in self-defense). Quite fast, quite furious, Stasi Style came back. The other Cow in charge of ¿defense? was Nú(t)ria. This generally peaceful cow transformed in a Vaquilla and in a incredible striker. Bitch number 6 was desperate with her, Mad Nú(t)ria accomplished my dream… she made her bleed. She almost score several times, and she stopped the murderers several times. There are not enough words in WordReference to describe her performance.

The portiere, Ieva the Word was again superb. She ended very pissed off and with a middle finger injured, it was her way to say fuck you bitches to LBRC. Secure, fast and aggressive, our portiere is the empress of the box and, sometimes, as a good empress she wants to conquer more territory with the ball in her hands… luckily, the referee was bad as hell, so he didn’t saw it.

Last but not least, Von Darth Vader. First time playing as a left wing, and you can see my dyslexia and confusion on the pitch. I had to concentrate to unravel the direction I had to take (alla DES-TRA) when I finally succeeded I had bitch number 6 ready to kill me. The first match in which I ended in the floor made my Dark Side spirit rise, and number 6 and me have few words and kicks. She told me: this was a fault; I told her: You did it first.

Outside the pitch we had a Curva di Lusso, plenty of librarians and Cows, the Curva support us and give us the strength to fight and survive this war. With the warmth of the wine they were our guides in the darkness. With you we will never walk alone.

Finally, the 21th of February we are going to meet the bitches again. And we are ready for a real vendetta.

“I’m a fighter. I believe in the eye-for-an-eye business. I’m no cheek turner. I got no respect for a man who won’t hit back. You kill my dog, you better hide your cat”

Or adapted to our situation:

“We are fighters. […] You tried to kill our Gazelle and Tiger, you better hide your bitches”