Impressions from a new Squadra member on his debut

After our first game against Romito, in which he debuted with the legendary nr 10, Dimitri flew to New York. The Big Apple, however, couldn’t keep him from thinking about the game and IUE Calcio… Below are a few lines about his first impressions on his debut with IUE Calcio 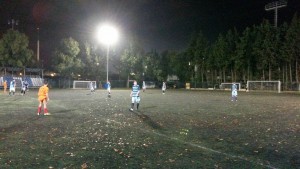 There is a certain magic that goes with every first game of the season. The dressing room before the game was so condense of adrenaline that one could almost touch it (and definitely smell it). Although many of us had never played together, the wonderful Squadra spirit translated into dominant and offensive football in the first half. Our two metronomes on the wings made full use of the gigantic space in the back of the slow opponents, the defense was rock solid and there was a lot of possession on the midfield. After a great splitting pass from (I think) Gabo to Alberto, a wonderful back heel and a cold finish by Bomber, the dominance was translated into a deserved 1-0 lead. It was not the first, nor the last time that the EUI gladiators ripped the (increasingly frustrated) Romito defense to pieces. Unfortunately there was a lack for cynicism before the goal, something we would later regret.

The second half was an exercise in frustration with the referee in a lead role. Every other second the game was interrupted, which kept the Squadra from developing any tempo in the game. The few gaps that opened up, were closed again with (very contestable) offside calls. Growing nervousness, a lack of automatisms and bad luck led to a surprised Romito striker suddenly standing in front of an empty goal. Despite twenty final minutes of high pressure and great Squadra spirit, 1-1 was also the final score.

The things that were lacking are things that will come naturally – routine, confidence and solid tactical agreements on pressure and passing, blablabla… However – and this is the fucking magic of it all – the Squadra and its amazing Curva proved to excel in the things that teams cannot train: friendship, passion and positive atmosphere. Until the very last minute of the – after all quite frustrating – game, there were only constructive shouts and shoulder slaps.

The most memorable part of the night was without doubt the third half. The Squadra merged with its Curva and filled Finnegan’s with epic singing and (not necessarily sober, but very passionate) tactical elaborations. On one thing everyone agreed: the Squadra is ready for an unforgettable year of celebration to the God of football (personified for the occasion in the form of our Prezi).

P.S.: tomorrow our second game, on our home pitch Cerreti at 21h, against Gloria Firenze