At the whistle of the referee, Cosimo walks quickly towards the bench and Gatto De Angelis makes his entrance in the pitch in front of a waving, passionate curva. How is that possible? Well, let’s start from the beginning…

It’s a Sunday night and the Italian President of the Republic held consultations with Matteo Renzi (reknown manager of Artemio Franchi stadium) for the definition of the upcoming Italian Government. At a certain point, Napolitano notices Renzi’s stylish, light-blue scarf, and exclaims: “What a scarf-Spettacolo! What is that?” Renzi replying promptly: “This is the scarf of the IUE Calcio Squadra Fantastica. Don’t you have one?” The sad Napolitano had to ascertain: “No, I don’t…”. The Head of the State cannot know that in the very same moment, in Casa Caracciolo someone is already taking care of the last President without our beloved scarf. 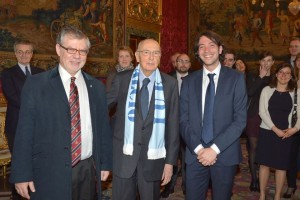 No one in the changing room is expecting an easy match. It is crystal-clear that Biscioni (Italian for “big grass snakes”) will put all their effort trying to revert the 1-0 loss that in the first match had led a clearly inferior team to engage in a nonsensical fight on the pitch. They probably have still in mind the clear memory of the fabulous shot by coach Karremans that donated us the victory in the first away match.

Our starting line up relies on: Cosimo putting down the shutter; Ludovico Lundsteno, Giovanni Carremano, Patrizio Errone waiting for Biscioni’s attackers; Biku, Luis, the angriest Gazza, Gabo, Jonas controlling the pawn crossing at the center of the pitch; Albert and Metin seeding terror in Biscioni’s box.

The first time wasn’t exactly a duck soup. Biscioni appeared physically better prepared and tactically organized than in their first (lost) match. The game is quite balanced, although the referee doesn’t miss any occasion to express his approval for the actor’s ability of their number 10. This player shows impressive diving, kicking (everything-but-the-ball), and intimidating skills. Notwithstanding, it becomes soon clear that his intentions are quite hopeless as our central columns Loduvico Lundsteno and Patrizio Errone take good care annihilating his aggressive exuberance.

While their yellow-black dressed 12th man whistle as an old friend of number 10 would, our 12th man is the best Curva seen at Cerreti in years. Our flag is waving high towards the sky, also dressed with the holy colors of IUE Calcio. Everyone is present next to l’Unico Presidente: the young Maxìm, representative of the IUE Calcio Youth Club, the Maddest Cows, Capo Ultrà, D16 Bomber Spettacolo, and all the passionate good guys of our beerful Curva.

Jonas-Giovanni Drago is impressive on the left side and his interaction with the other midfielders allows us to avoid long balls to trigger good offensive actions. The minutes pass without dangerous chances for both teams and the game looks predestined to a draw break. Luis and Gabo bring all their South-American vigor and expertise to our actions.

No one suspects that we are about to assist at a prodigy.

JK: There’s a free kick for us on the right side, just outside the penalty box. I go on to take it. I wait for our towers Ludvig and Patrick. I look at both the crowd in the penalty box, as well as the goal, which is not too far: it’s a big chance to make 1-0, just 10 min before half time. I am doubting, I am not sure if it’s a direct free-kick or indirect, then I hear one of their defenders shout: “watch out! It’s a direct free kick”. I am still not sure.. Their defence is not very well positioned, but I also feel comfortable shooting directly from that distance. I take a half-way decision: I decide to shoot low on the second post, so that maybe someone can surprise the keeper by deviating the ball, or someone can be there to kick-in the re-bounce. I want to shoot hard, I prepare my legs like they taught me to when I was a child, when I learned to play football in the mud. I remember the game against them in November, and how much I want to win this game, for the points, for the team spirit, for Presi, for the Curva. I put all my anger and energy in the shot: the ball goes in the right direction, but instead of going low, it lifts up, going straight into the upper corner of the goal: 1-0!!! I am a bit surprised, for a second I don’t know what to do, but then I know. I look at the Curva and start running towards our supporters: this must be celebrated, with my team mates, under the Curva, like a real Squadra di Campioni. This is my second goal for IUE Calcio, again a shot from far away, again against Biscioni. But most importantly, it’s the first goal of one of our best performances this season. A performance to be proud of.

Biscioni are even more determined at the start the second half. Their intention of reverting the result produces a long ball intercepted by the attacker, but his shot is saved by our guardian: the door is closed! Biscione begin having the suspect of going straight towards the abyss of disappointments. Trombi-Giuliano Bico is a pure energy-explosion and engages in a spectacular almost-hopeless ride on the left towards the Biscioni’s box. As a crazy horse, he doesn’t stop the run even after the Biscione-keeper holds the ball. He is now a cheetah on the pitch, turning for 180° through the whole box and finding himself ready for a spectacular flying header on the right-side of the pitch, in front of our wildly joyful Curva.

The Squadra at this point needs all its energies to accomplish the masterpiece: at the 10’ minute, Robert enter in the pitch in place of Luis, and five minutes later Franco McNamara is ready to substitute Biku.

At the 12th minute Gazza gets the ball and pretending he is Ronaldiño dribbles two hopeless defenders. The ball is served to a proper Barça player as Albert Arcarons is next to him, getting ready for the show. He gets the ball and while the keeper is shocked by his a remarkable hairstyle he deposit the ball on the left of the goal when it happens the impossible. The ball touches the left goalpost and remains rolling on the line. Two defenders slide contemporaneously to kick out the ball triggering a pinball between their four legs. They can add Spettacolo on Spettacolo, but they cannot avoid their fate and the ball finally goes in her natural destination: Biscioni’s goal!

We are quickly moving towards the final debacle. Five minutes later it’s again show-time. Coach Karremans wins a ball on the midfielf and blindly kicks it forward: the perfect pass for Treno who, just like he done so many times before (but this year not so often yet) runs after the ball, towards the keeper, and with a tremendous shot scores the 3-0 for us!

The Squadra can now deploy all its potential: at he 20’ the goal-hungry Lukas lends relief to Jonas and five minutes later Lore “El Diablo “ Giuntini leaves the bench to Bomber Metin hailed by an ecstatic Curva (someone noticed the pink half of Curva clapping more intensely).

At this point, every other team would have been sated. But we all now that Squadra Fantastica is not as every other team, and thus it had to show once again all its commitment to raise the stake of Spettacolo at simply unprecedented levels. Ricky Ciaccin is thus ready to take the place of Alberto Arcarone. At the 34’45’’15’’’ a self-managed bench conceives the unconceivable: Cosimo rolls his arms and a overenthusiastic Metìn pushes me in the pitch. The whistle falls from the referee’s mouth. An ever-labeled anti-football, the constantly last child chosen in the team distribution: I am now the guardian of our inaccessible spot. That’s the true nature of the Squadra: friendship and passion make possible the impossible.

That’s not enough, tonight is the night: Lukas takes the torch of Spettacolo delivering a lob ball beyond the back of an incredulous goalkeeper: 4-0! That’s the absolute jubilation in a night that will be long remembered: the Poker Night.