“Show me a good and gracious loser and I will show you a failure”
(George Halas)
Our first game against Romito was a tough one for three reasons:
1) we weren’t able to kill it when we had the chance (“Sometimes in soccer you have to score goals.“ Thierry Henry);
2) we are a new group, with many new players, and we have to get used to each other;
3) direct consequence of 2), our ability to dominate the midfield is still work in progress.

Against Gloria Firenze (GF) then, we knew what we had to do. What we didn’t expect, probably, was that the team we were going to face was a stronger one, if compared to Romito. 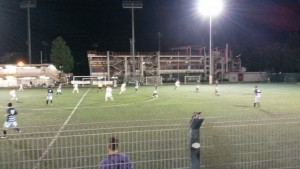 Since the very beginning Gloria Firenze started pushing quite hard. They had two fast strikers and a couple of good players; generally speaking, a good team. Yet, even without succeeding once in passing the ball to each other, Alberto was as usual incredibly important in provoking an opposing defender to foul him.
Free kick.
From an interesting position.
Jan Van Pep Basten Karremans.
Keep that name in mind.

According to the international football database, during trainings, IUE players scorse one goal every 23 shots (not to talk of when we train on corners – 0,1 goal every 73 corners taken. Please note that we often try them with no goalkeeper), usually that goal comes from Jan Van Pep Basten Karremans.
There he goes, rock-like-human-being Karremans. 25 metres from the opposing goalkeeper. “One shot, or one opportunity” – as Sir Eminem – and we are 1 goal ahead.
Although that piece of art, Gloria Firenze keeps pushing and playing; we play better than the first 10 minutes, but we still have problems. We aren’t able to keep the ball down, GF is quite good at pressing us, and their long-ball tactic is functional to their fast strikers, especially to the number 9 – a fast and skilled player, and the most anal and annoying person known in the northern emisphere of the earth (still according to the international football database); a mixture of Van der Vaart and Suarez with Gerrard’s voice. Anyways, he scored. 1-1 (12th minutes).
Few minutes before the end of the first-half, one of us is shot down within the box (I don’t remember anything about it): penalty. A ray of light from the sky hits bomber who is therefore the chosen one.
Cold, precise, just perfect: goal (37th minutes). That’s what it means being Bomber (“I do not play football, I score goals.“Dario José Dos Santos).

Half-time.
We start the second-half still trying to keep the ball down, but our midfield struggles in being the leading one due to the long passes; as we said that is GF’s strategy. Indeed they also press our defenders very well and high, giving Roberto, Bjorn, Carl, Jonas, no time to think and play the ball. Fair play to them.
Now, I must admit I don’t remember much of the individual episodes… I therefore do not remember if they scored the second goal (48th) and then they got a red card or vice versa. In any case, that’s what happened in the first 10 minutes of the second-half. 2-2.
Then substitutions started: Luis, Frederico, Lian, Lorenzo, and I, could proudly attend the game. Few minutes after I got in, I hit the ball with my head, kind of good considering that I’m 1mt25 cms shorter than the average AICS football player. Yet I was able to score few minutes later (57th), thanks to a mix of trickery and something else (probably, luck).
3-2 and some of us (as lately it was admitted) were sure we were gonna win, but at the 68th minutes GF drew again, with a very good goal. Three minutes later our Capitano got a red card (“Soccer isn’t very social. Plus, if you don’t like someone on the other team, you can do something about it.“ Mia Hamm); causing a penalty. 4-3.
“A penalty is a cowardly way to score.”(Pelé on the number 9) [This quotation doesn’t count on Bomber’s case]

Game over, we lost.
Again, we were winning (3-2 at the 57th) but we didn’t kill the game (“The first 90 minutes are the most important.”Bobby Robson)

Again, we weren’t able to keep the ball and control the ball.
But we know that that is due to the fact that we are still looking for the right recipe. Once we’ll have found it, hopefully Monday, things will start changing, and the Squadra Fanastica will start shining again, as it is meant to be.
After the game, we all met at Finnegan where there were some rumours on Ludvig faking his flu for unknown reasons (it seems that in A2 Lague Accidental’s Mister was fired…), Alberto il Pazzo talking about a trip in Berlin (it was reported he would like playing in better teams… is he planning a market transfer to Herta Berlin?), and a sweet moment between some players and il Capitano Robe, who was crying alone for having left the team in 10 after the red card.
Usual generosity of Simon, Finnegan’s president and archeological Senatore.
And special thanks to our tifosi: “Whereas fanatic is usually a pejorative word, a Fan is someone who has roots somewhere [i.e., IUE].”(Simon Kuper)

Forza IUE.
federico valero*
*federico valero, a pseudonym, is the author of two match reports and the co-author of five random e-mails. This is his first piece of the season and, hopefully his lost. He is also one of the nation’s leading injury tester (specialized in knees and right wrist). He likes hardcore punk and the 4th season of Friends.

PS: (special thanks to Dieter for his FB’s status within which I could find the cronology of the goals)
|  squadra fantastica; match report