On Tuesday, April 19, the IUE Calcio Squadra will play against I Girone at 21.00 at our home pitch Cerreti. In this game, we have not only the opportunity to win for the fourth time in a row but also to further move up in the table. 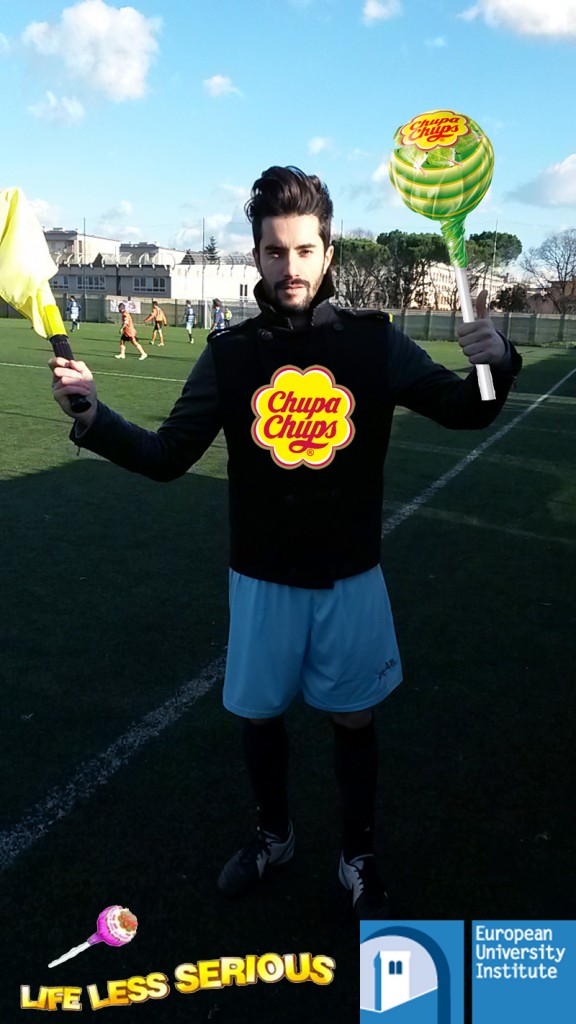 However, currently side-lined with an ankle injury is our Catalan starlet Albert. The day before the match, IUE Calcio Blog met him for an interview about football in Catalonia in the Social Room of the EUI Library. Albert tells: “In Catalonia, where I am from, we have Chupa Chups before every match.”

Chupa Chups? “Yeah, Chupa Chups is a popular Catalan brand of lollipop and other confectionery sold in over 150 countries around the world. The brand was founded in 1958 by Enric Bernat.” OMG! That’s awesome! “Look, I tell you the story. In the early 1950s, Enric Bernat worked for an apple jam factory called ‘Granja Asturias.’ After he broached the idea of making lollipops, the investors left. Bernat took over the company in 1958 and renamed it Chupa Chups. He built the production machines and sold a striped bonbon on a wooden stick for one peseta each.” Amazing!

To lick or to suck

But what does Chupa Chups mean? “The name of the brand comes from the Spanish verb chupar, meaning ‘to lick or to suck.’ Bernat got the idea of a ‘bonbon with a stick’ from a cursing Ciacci as his younger brother got sticky hands from melting sweets. Bernat felt that at that time, sweets were not designed with the main consumers, Patso and Dzeko Garzia, in mind. The EUI Mensa was instructed to place the lollipops near the cash register within reach of Squadra hands, instead of the traditional placement behind the Spremuta machine.”

Presi Alex Trechsel is currently in Barcelona trying to reach a deal for the Squadra to perform at the “Chupa Chups 60th Anniversary World Cup” in 2018. Other teams playing in the tournament are the Mars Rovers, the Snickeroos, and “Lian & Coca-Cola’s.” However, talks are currently on halt because the organisers are unwilling to serve goalkeeper Ollie his favourite midnight snack, three Kebabs in a row.

It’s round and long-lasting

Another interesting aspect of the Chupa Chups history, Albert tells us, is that the Chupa Chups logo was designed in 1969 by world-famous artist Salvador Dalí. Its first marketing campaign was the logo with the slogan “És rodó i dura molt, Chupa Chups,” which translates from Catalan as “It’s round and long-lasting.” Albert goes on, praising the progressive policy of the Chupa Chups company: “Did you know, the company’s current anti-smoking slogan is ‘Stop smoking, start sucking’? That’s the spirit of the Catalan people!”

Tomorrow, the Squadra will play at 21pm at Cerreti. All those coming to the Curva and support the Squadra will hear more fascinating stories from Kaiser. Convalescent player Kaiser promised to join the Curva for the first time since a brutal attack from an angry looking, very aggressive blade of grass during halftime break some weeks ago.

Before leaving the interview, Albert also mentioned another incredible Catalan invention: the cleaning mop! We are not sure what Joy Mangano thinks about Albert’s Catalan cleaning mop claim but this story would definitely make another good movie with Jennifer Lawrence.

Hollywood Whisperer’s News reports that Jennifer Lawrence is on her way to Florence to discuss the true mop legacy with Albert after the match in Finnegan’s. So come and join the Squadra at Finnegan’s! Free entrance for the first 20 tifosi with either Chupa Chups or mops! #ForzaIUE