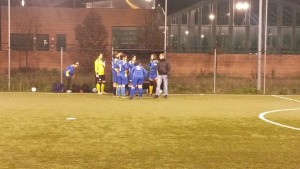 On Wednesday 26th February the determinate herd of cows headed for yet another victory in their home pitch. One could think that you would need just a good game and a few goals for a ‘grande vittoria’. But unfortunately football is not that simple or easy, especially when it includes the EUI van and its rather talkative travellers, right Jony? You need to be prepared before the match. So the three golden-rules before the match.

The rule number one: Control the weather or adjust to it

It had (again) rained heavily before the game and the team was feeling a bit anxious about it. Although we have tried the adjustment tactic and started to train for extreme weather conditions (see last training), the wet pitch really does not do justice to our technique and elegance when we dance with the ball. So this time we decided to control the weather and the rain stopped before our EUI van curved into the Piazza Le Cure. How is this possible? Well, you have to have Francis, alias Apollo, on your side, who is the ultimate Goddess of music in the EUI van but apparently also masters the weather prognosis which she modestly reminded us.

The rule number two: Remember to warm up properly before the game

As we are professionals, we already have our warming up routines so polished, so I can only provide you with a picture and then move to our next rule.

The rule number three: Listen to your coach

This is a sacred rule. We never break it. Our dear Torito really deserves all our attention. Right Jony? 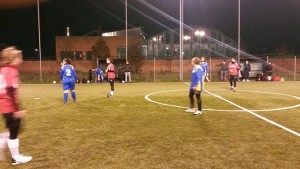 After complying with all of the rules, our team was ready to emerge victorious. The first half of the game was truly controlled by the Mad Cows. Already from the first minutes our ‘one for all andall for one’ Gemma proved to be the most versatile player in the field. She was defending, playing in the middle field and attacking – all at the same time! And we even have a proof of her multi-tasking. Together with Sara, Gemma was the backbone of our attacking strategy. It was, indeed once again, beautiful to watch when our ‘Hamster’ Sara played with the ball. On Wednesday she made some incredible passes but the way we know Sara is the power and passion that she delivers us in every, single game. This usually (or in fact you can say everytime) results in one or more goals. This time she made the most difficult goal – the first goal! The second goal was done by our ‘Apollo’ Francis, who had to use her divine virtues and predict her dribbling beforehand because it was just too refined to be true. A smart pass from Sara enabled our Apollo to dazzle everyone (maybe even herself) by going on a solo run almost half of the pitch and shooting the ball behind the goalie. So easy. So effortless. Francis, our ‘Fantastica Asfaltatrice’, cannot be praised by words but maybe some lyrics of the contemporary high culture will do some justice to her.

But of course three goals were not enough to us, like Sara screamed during the break: “We have to make more goals!” And we sure did – well, almost. Never before have there been so many ‘Grande’ shots from both of our ‘Lucky Luke’ faster than bullet strikers: ‘Blonde Torita’ Sanne and Laia ‘The Queen of…’ öö, everything? Seriously, there is no space for all of your nicknames in this report, Laila! The Curva was jumping with joy because this power duo did not only present us with very intensive and skillfull playing but even (literally) blended into one at some point. Girls, you suffered some injustice this time but fortunately you took it so calm. Hmmm, it seems that our Darth Vader has a lot of enemies but once again she took all the provocations and kicks so calmly.

Now this chapter (of the report longer than any EUI-thesis) is dedicated to our dynamic trio. The Beatles might have singed “all you need is love”. But they were wrong (it happens). The true version is, in fact, all you need is a good defence and a spectacular goalie. Nú(t)ria, Maria Luisa and Ieva, folks remember these names because they are the backbone and the soul of the Mad Cows victories. So lets start with our goalie – Ieva the Word. She yet again amazed us with her astonishing savings. In fact, no ball passed her this time and one ‘diamond’ save in particular stands out in the memory. Her legs seemed to turn into elastic in order to secure the right corner from a ruthless attack. We were also able to record another saving from our ‘too cool for school’ goalie with a ponytail. Well, Ieva did not have to feel too insecure when you have ‘The Head’ Maria Luisa and ‘The Backbone’ Nú(t)ria as your defensive pillars. These girls’ cooperation is like a spider web: you might not always see it or believe the strength of it (once again, including our defenders themselves) but at the end of day no one escapes because THE web catches all. In order to have this seamless cooperation, you have to know what you are doing and with this duo only a brief look is enough to communicate all the important information in nanosecond: “you take the player, I will target the ball. What is Jony shouting? Just Spanish power words, ignore? Are you coming to the post-match lunch? Of course. Btw, the referee is rather cute, etc.” Our defenders deliver us intelligent playing and patience (and I believe I saw some real pressing there… go girls!). Maria Luisa, is our best head player and really dedicated to catch every ball, whereas Nú(t)ria every now and then tries to do some moves à la Argentina. But no, sometimes we have to face our mortality (apart from our Apollo) and learn that the referee do not approve playing with hands (not even with a Golden Hand!). So Maradona will still have to wait for her beautiful goal and, in the meanwhile, we will have invent a new attacking strategy for our ‘I believe I can fly’ striker Ieva. 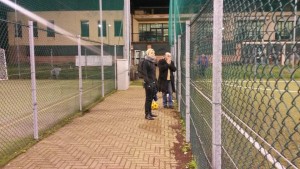 The most enthusiastic member in the Curva was Gemma’s boyfriend, who, I swear, did not even blink so that he would not miss any second from the match. Other Curva members were cheering rather loudly but had some other distractions. Goshua, our international superstar, was surrounded by an unexpected fan group. Fortunately, the situation was resolved by Bea, the real ‘Miracle’, who sophisticatedly negotiated with the boys what would happen if they would not leave our star player alone. Bea was also occupied with teaching ‘Gazelle’ Mira some Italian so that she could better communicate with the referee: “E! La Nostra!” As usual, it did not work. So Gazelle had to use her normal power rhetoric. When the power politics did not help either, Gazelle decided to demonstrate by making an impressive entrance after the game. According to some objective (?) bystanders it looked something like this.

Last but CERTAINLY not least is our dear Coach Jony. He has so far lead us to our third victory in a row and after the fourth (coming) victory he can surely shout at the Mensa in Badia. Yes, Jony be as you are and stand by us because if the road is our destination, then our road is victory but in this road you will never have to walk alone (or thirsty). There will always be the drink of eternal youth from Dionysos (not to our bambino, at least, not until she’s 18). Wait a second… uh, who was supposed to bring the wine…? Don’t worry, there is always Sax bar and this round is offered by the ‘Spanish’ embassy. So EU(I) citizens or any other nationality, human or animal race, stay tuned and fasten your seatbelts, because next Monday the show must go on and this show will be a tribute to our ‘Tiger’. Inken, we are ready to play for you and will make sure that you are alarmed the whole game.

Report by ‘Gazelle’ Mira ‘The Capocannoniere’