The season has started! In preparation for the first match of the season, IUE’s fantastic squad left for a strategic training camp of four days, working amongst others on tactical formation (Thursday, Fiasco), fitness (Friday, Cerreti), dominating the playing field (Saturday, Finnegan’s), and collective-response-mechanisms to individual breakdowns (Sunday, Schifanoia – thanks for that Gabo). Especially the last quality proved to be useful during the match – but more of that later.

Following the recent publication of Johan Cruyff’s autobiography My Turn (Dutch title: Johan Cruyff – Mijn Verhaal) IUE chose to start in a 1-4-3-3 formation (see below), thereby once more showing their intention to offer their loyal fans a type of football that has earlier been defined as spettacolo puro. And a spectacular start of the match it was. The defensive line was showing from the start their determination to not give away any chance, the three attackers forced Lanciotto’s defenders far back and the midfield – though outnumbered – dominated the play. Gazza was Gazza, Simon showed the relief that the release of the first-year-economist-chains brings about and Reto was trying to run more meters in one match than all of last season taken together (which, allegedly, was not too hard).

However, notwithstanding the impressive play the squadra managed to produce at the start, Lanciotto-Florentia proved to be dangerous on the counter attack. Within a time span of five minutes the orange-coloured opponents (if you can’t honour Cruyff with your game, you can always play in orange) managed to produce two goals. Whether the referee was impressed by the curva, mistakenly interpreted L’Antica Badia’s offer of free pizza’s for goal scorers as also applying to the disallowance of Lanciotto-goals, or was mysteriously inspired by the football-gods (after Cruyff’s intercession?) is not for us to say, but the fact of the matter is that his performance prevented the scoreboard from changing in Lanciotto’s advantage. Soon after these decisions the referee seemed to realize that his appearance started to look suspicious to the neutral spectators at home, as a result of which he decided to graciously stick to yellow, as opposed to red, cards for the goalkeepers foul on Özgur (although the path to the goal was open) and a horrible tackle from behind on Reto (leading to the first substitute and the debut of Gabriele).

Finally, IUE rewarded itself in the 35th minute. Out of a fear that spending more than one or two sentences on the goal will lead to charges of narcissism the author has decided not to say more about the goal than this: it was beautiful, the crowd went mad, and Cruyff would have been proud. Also, I would like to thank Fred for providing me with the chance, Aleks for offering me a free pizza, and my mother for always supporting me.

Despite the inspirational and eloquent halftime speech provided by O. Gardner (and the well-meant mumbling of the other misters), IUE had a disastrous start of the second half. In less than ten minutes Lanciotto managed to score a goal (which, quite frankly, was so ugly it should have been cancelled) and two defenders had to be substituted due to injuries. Carl hurt his hamstring and was replaced by Dejwar (also a debutant), and my body was so confused after scoring my first squadra-goal that my arm decided to move in ways my shoulder couldn’t handle, resulting in yet another debut: Diarra. At this point the squadra proved it had learned to deal as a collective to unpredictable circumstances. What is more, O. Gardner showed his tactical genius by putting Simon in a goal scoring position at the heart of our own defence. Not long after the final substitution had been made (Moussa came in for assist-king Fred), Jan managed to deliver a perfect corner kick and Simon confirmed the brilliance of totaalvoetbal by heading the ball straight in the goal.

In the last fifteen minutes the substitutes proved their worth by putting fresh energy into the game, forcing the opponents back and resulting in more yellow cards for Lanciotto’s desperate defenders. Occasionally, however, Lanciotto managed to break out dangerously – but thanks to a brilliant performance by Doman none of their counterattacks resulted in the equalizer. Until, alas!, the 79th minute (which, by the way, in this league equals the 89th minutes in regular football). Disaster struck with venomous power, when in the last minute a free kick was given just outside our box. 2-2.

What else is there to say.. The path to glory has started.

What a great, bittersweet start to the season! Che spettacolo! FORZA IUE!! 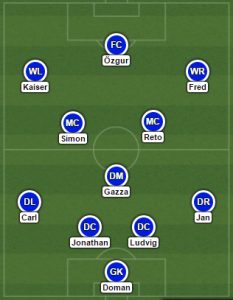 ’23 Goal Lanciotto cancelled – but why?

’43 GOAL Lanciotto – confusion, because not cancelled; 1-1