It ain’t over till it’s over: another heroic win after a thriller

On Friday, November 17, the IUE Calcio Squadra not only beat Pian San Bartolo in a heroic battle 4:2, some of us even fought Freddy Döner to its knees. Mister Tim Schittekitten reports from a night full of penalties, substitutes, hymns, and Samosa…

After a tight, but well deserved, win against San Martino the week before, the IUE Squadra Fantastic faced Pian San Bartolo on a cold November Friday night. San Bartolo didn’t manage to collect any points this season and we wanted to make sure that this remained the case. Overconfidence would be misplaced as up to now as even the finest EUI economists did not find any correlation between performances of the Squadra and the rank of the opponent. With a win, our team could settle itself firmly in the top-5 of the respected AICS Campionato B1. Nothing too unexpected in the formation, the Misters chose for the familiar 4-2-3-1. The only big change was that Simon Skipka started from the bench because of undisclosed disciplinary reasons. His logical replacer was Bestia Banchiere Leggenda Gazza. 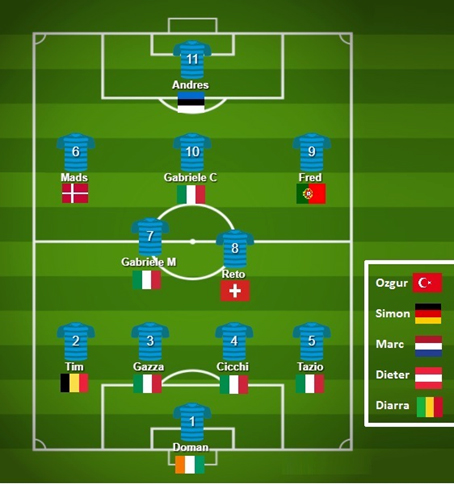 The Squadra started off quite good, smooth combination football was brought, however not much danger was created from both sides. Without any interference of our boys, the opponent started complaining against the referee as only long-serving AICS Calcio giocatori can do. Their (ungrounded) rage resulted in 4 yellow cards in less than 15 minutes, unclear what the purpose of their actions was. Finally, after a minute or twenty, our lonely fighting Estonian target man had a good chance for a header but decided on the visibly overweight portiere of San Bartolo. A second occasion was created after a run of Fred on the right wing, the ball was brought to Andres who gave it a shot. Unfortunately, he hit the cojones of a San Bartolo player who will remember this action for quite a while. Mister Gabriele got the rebound but aimed at the wrong side of the post from close by. Later, also Danish dynamite Mads came close to opening the score but a good save kept him from scoring his first Squadra goal. Next, the pocket striker of San Bartolo came close to Doman, but before he could do anything he was torpedoed in the box by Gazza. The Arbitro acted as if nothing happened and decided to give a corner to San Bartolo. Maybe the Arbitro was influenced by unnecessary complaining of San Bartolo seniors earlier, but it was for sure the most unlogical decision to be made at that moment. Finally, this corner kick resulted in an almost goal for San Bartolo but with some luck, the ball was turned from the line. We went back to the dressing room with mixed feeling. Good football was shown, we could have scored at least a goal, but it could have been worse as well. The Misters feared for an Equipe 86 scenario.

One change was made in half time. Simon was dropped in as a striker for Danish dynamite Mads who was the target of many San Bartolo frustration. Andres moved to the left wing. The Squadra started furiously in the second half. High pressure and good switching seemed to bring San Bartolo into serious troubles. A goal couldn’t last out and finally, after another good run from Fred, he managed to cross the ball onto the head of Andres who was present at the second post. La Bestia didn’t doubt for a second and scored his first one of the season! The Misters were very happy to see the tactic working and this action will serve as a template for future training sessions. Just minutes later Simon got the ball in the box, past his direct opponent and was kicked to the ground. This time the Arbitro didn’t hesitate and whistled a penaltySimon showed that he wasn’t brought out of balance and scored his 3rd penalty and 4th goal of the season. 2-0, all players and the Curva, this time made up of WAGs Olli and Eliska, loyal supporters Sam and Mister Gabriele’s father, as well as non-playing players Moussa and Jonas, were in a delirium and already thinking on lifting some beers in Finnegans to celebrate the victory. However, the game was far from over. San Bartolo showed character and chose for the attack. After a coordination fault in our defence, a long ball got the San Bartolo striker, who didn’t doubt and scored the 2-1. San Bartolo got new hope and not much later an overenthusiastic Dieter ‘’Pyro’’ Reinisch, who came in for Andres, kicked down a San Bartolo player near our box. Worst came to worst and the following freekick slipped through the fingers of our otherwise very confident portiere Doman.

This unexpected comeback hit the team spirit hard. After a moment of doubt, the Misters decided to go for the win and not count on a draw. Some power and speed were added to the team with Ozgur and Diarra coming in. Additionally, Marc ‘’Robben’’ Piena came for Tazio and our formation switch to a more offensive 3-5-2. This seemed to be a golden move and not much later Ozgur, who crossed the whole field as only he can, came in scoring position after a brilliant centre from Diarra. Ozgur shot the ball as hard as he could and the San Bartolo portiere had no story against it: 3-2. The Curva goes wild and Ozgur, in ecstasy, expresses his joy by starting to shout in, supposedly, Turkish. Directly the Misters decide to go back to a 4-2-3-1 and ordered Simon to move to the back and take his familiar position as a centre back. Not much later, a visibly frustrated San Bartolo player receives his second yellow and has to leave the pitch. Der Dieter takes advantage of the space and puts the end score on the board with a cracking shot. Few minutes to play and ‘’Pyro’’ Reinisch goes for another run, this time he decides on the portiere. In the rebound, he almost manages to get send-off after something that looked at a flying tackle and gets threatened by the big bald San Bartolo centre back. 4 minutes extra time were added to the game, but nothing could threaten the Squadra anymore, the 3 points were kept home.

Season statistics showing the steady move of the IUE Squadra to top of B1.

With this win, IUE Calcio moves up the table and nestles itself in the top 5. Next game will be away, on the gigantic real grass pitch of Bulldog Signa on Wednesday 22/11. The misters are confident to continue the winning streak and race to the top of AICS Campionato B1.

Post-match discussions continued until at least 5 am in Freddy’s Döner just opposite Mercato Centrale and there is still some confusion regarding who paid which part of the bill. 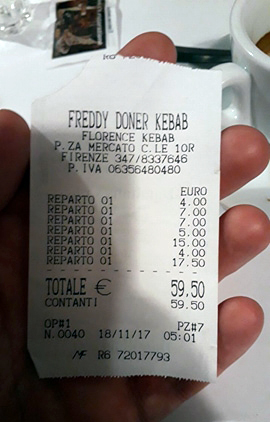