That ball twisted my nipples, or How to do a striptease on the pitch

Our first victory has arrived, with delay, but it arrived. It was a match almost not played; it was fight almost not fought; a striptease on the pitch; a “where the fuck am I? Where is the pitch?”. I will remember the exact address of A.C. CLO Centro Sportivo the rest of my life: Via del Castello 29, Sesto Fiorentino. Una stradina piccolina piccolina, una partita con delle grande giocatrice!

I’m not going to explain the whole trip, which would mean a paper of 5.000 words, with peer review (different cars, different stories). I will limit it to the epic arrival:

In the Francesca la Fantastica Asfaltatrice’s car the atmosphere few minutes before the match was, at least, tense. If we didn’t reach the pitch in 5 minutes, we would lose the game. We had the T-shirts, the coach, the Asfaltatrice and a Darth Vader. Our presence was required. Finally, FLFA’s mobile phone (God bless it) found the stradina, and FLFA started to drive as the Italian she is. We did a trip of 4 minutes in 2. We were not secure of where it was, but we were vicino, vicino. The Light was hidden from us, but suddenly Loredanna – The Animal shouted “Laila corre, corre, porta le divise!!!”. The Light was seen and, running as Forrest Gump, with two bags, Darth Vader arrived with the t-shirts. Some members of other teams did some pictures with our divise, we are now famous. Meanwhile, we were trying to get ready: changing clothes on the pitch, putting contact lenses with the phone camera and trying to figure out our positions. Torito was a bit stressed trying to guide the herd of cows, disperse all over the Centro Sportivo, looking for T-shirts and a shadow to put on the Divisa. 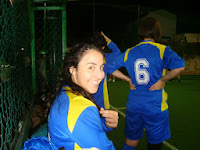 In this initial chaos, the stress of the trip gave us attitude, and which attitude! Goshua’s Mum [GM] is our new Capocannoniere, she scored twice in 3 minutes. Of course she was not happy with just 2 goals (you know, that’s for pussies) so she scored 5. We all learned that, in case of emergency, just pass the ball to GM. She will catch it, not matter how many rivals are surrounding her. But Kaiser Inken will have more opponents for the Capocannoniere title: Magali scored a pure striker goal, well situated and with the number 10 in her back, she scored the third goal for the Mad Cows. The Curva was astonished: 3-0 not even 10 minutes had passed. The spettacolo went on and Francesca La Fantastica Asfaltatrice scored a prodigious goal, showing all her aggressive attitude during the match. She emulated Hulk and Braveheart in the celebration and every time she kicked the ball with passion and precision. The A.C. CLO players were scared; she was, again, a queen on the wing. The first match of Anne-PushUp-PushUp can’t be more exiting and with better results. She has the attitude, she has the strength, she has the goal. At some point, GM had to gave her an advice: Play soft please! She is our American spirit, where football is called soccer, and the girls know how to rock it. Our bomber Emilie finally found the path to the pitch, the last but not least car to arrive. Bomber was close to the goal, she fight every ball, but Núria was talking, not recording, so the goal resisted. Darth Vader miss some inches, the goal is still resilient to me during matches. The force is not with me, but it’s just a matter of time, the goal was closer than ever: two good opportunities, just few centimeters away. The dark side will score, I promise. 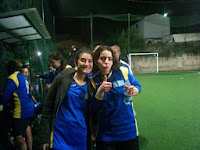 The defense was as brilliant as the attack. Núria, as the woman she is, can do two or even three things at once. She was defending, sometimes attacking and… talking with Bea?! Torito was freaking out, so she came back to the bright side following the Word of Ieva. Special mention to Alessia and her prodigious “gambetta”, she just stole the ball once you think you succeed. She is fast, she is precise, is the dottoressa of football. Gemma was simply brilliant, playing in defense and as wing when needed, she provided to our attack with wonderful passes, and the defense with security and precision. Grande Gemma!!

This time our goalie was Bea who tried to emulate me stopping balls with the face. I tried to help her but, as it was not a shoot from Mira, she survived quite well. Organizing the defense and doing passes to the attack. Good job! 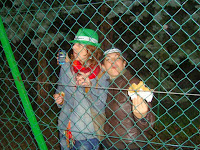 And last but not least, as always… THE CURVA. Two cows and one boyfriend were in there, supporting and parking cars of lost cows! They even jumped into de pitch, but the President and Captain Marilú put some order. A stylish Curva with black and green cappelli… and wine!

Finally, a special mention for A.C. CLO players and all our gratefulness. They wait for us 20 minutes, and they were playing football, not Kicking-Hugging-Boxing. It was a match with fair play and great rivals (they scored 4 times!). We can only wish them the best on this league.

Next week more and better. Because, we are A TEAM improving inch by inch, play by play, until we’re finished.