The Mad Cows go to the stadium 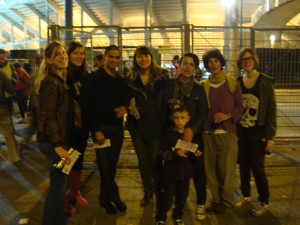 Last Monday Mad Cows representatives went to the Fiorentina stadium in order to see the match Fiorentina vs. Parma and to celebrate the end of our pre-station. By the way, we tried to learn some calcio strategies and we dreamed of playing on such a huge pitch one day! And, of course, we learned lots of bad words in Italian which will come on handy during the tournament… just to know what other teams are shouting to us, we are far too polite to use all these parolacce!

The final score (2-2) was really disappointing for those who were supporting Fiore, because Parma scored 10 seconds after the end of the match. Isa, we know it was because of you!

To recover ourselves from the sadness, we went to have a dinner and drink some beers near the stadium. During the dinner, we were discussing about the possibility of changing the name of the Mad Cows because it seems it is not aggressive enough to be taken seriously in the tournament, because cows are lovely, fluffy, fat, slow animals. After the scary proposal by Sanne of us calling ourselves “Maiale ciccioline”, someone proposed the name “Las Toritas” (small female bulls). From there, we started imagine the tifosi shouting Olé every time we would score and other crazy stuff.

In short, we spent a great time together, we shared some ice-cream and beers and we are growing as a team, regardless of the name. We hope we will have a new opportunity to go to the stadium soon.