The Slaughter of Virgin

First of all, greetings to all the cows who survived to the slaughter of Brea¿c?k Balls. This “team” that does not even know how to write their name, was more a club of Butchers than a soccer club. Their Capo, il Gallo di Combattimenti num. 7 tried to blind our Tiger, their Butcher num. 69 totally forgot the ball and tried to kill our Gazelle; núm. 22 punched Magalí with the consequential yellow card… for Magali! And the point is, my dear Babel Tower, that we have to learn Italian to make the referee shit in his pants as Slaughters CF did. The game almost end in a massive fight but my dears, this is not our match. It was theirs. We play soccer, we respect the spectacle, we love the game, we respect our rivals and even the shittiest referee ever. And, because of this, we deserve the words of the report. 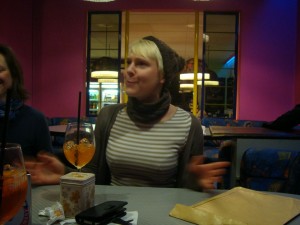 On Wednesday [18th of December], our wonderful team expected a total defeat against the third in the classification, but the herd of cows was up on the score most of the game. The Torito of this herd has done a great job, on Saturday we control the game against 5 guys, against Slaughters CF we show him that he can be proud of his job. Behaving as a real gentleman, he survived to the freeze of the bench; he felt our pain and our frustration. But he is also starting to dream with the Pavone 2014, because ladies… all of us played our best. Perhaps because it was, probably, the last match of our Capocannoniere and we wanted her to leave us with a smile, a victory, lots of fun and chocolate. The words are not enough in English (I always feel a bit limited with this language) to qualify the outstanding, astonishing, wonderful soccer that Gazelle Mira gave us during the last months. On Wednesday she was especially motivated, passing the ball and working in defense, and of course scoring… this time in the rivals goal! Twice!!! The queen of the wing. Fast as the wind and elegant as Audrey Hepbur, she contributed to our Babel Tower talking in Finnish to the opponents… and me! She was hit; they made her fly, but then can’t stop the Turpeinen Torpedos. She was kind with the Butcher num. 69 after an homicidal attempt; she got up fast, I was fearing a punch from her to the Butcher but then… she started to speak Finnish!! After a few seconds of shock for the three of us, she translated to English. I understood, the butcher didn’t. “It was not nice”-she said. Pardon but… REALLY MIRA? NOT EVEN A FUCK YOU BITCH?! Just a “THIS WAS NOT NICE?!” But, you know, we wanted to play and have fun, so we started to connect with passes again. And the best connection in the team was, of course, the Gazelle-Tiger one. It was wonderful, astonishing, amazing… there are no words to describe it (OMG I hate English!!). 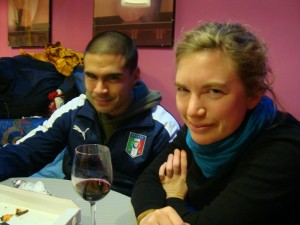 Tiger Inken showed her fierce face on the pitch when the slaughter began. Luckily, she survived in the jungle of the pitch. The number 7 thought that it would be a good idea to take off the contact lenses from the Eye of the Tiger, perhaps to give them to the referee, since he didn’t see any of the fouls from the Butchers but, somehow, he saw us doing non-existing fouls (I’m starting to thing that he was high in LSD), Inken, was so mad that she wanted to come back to the pitch to kill the num.7. Task in which Loredana was up to help. As one of the few players that understood what the Slaughters CF said, she was more than mad, asking for revenge and implemented the “THIS IS SPARTA” attitude in the middle of the pitch. Ghiaccio Loredanna had more work than ever trying to take care of our injuries. She asked for the home of the other team, maybe for our vendetta, she also had good opportunities to score but, there as always someone ready to kick her and stop her attempts. Von Darth Vader started the match high in codeine and with a very low competitive spirit (but almost scoring in the first 3 minutes, yeah!). However, as the punches and kicks of Slaughters CF began, I felt like in my not very nice home neighborhood. Contributing to This is Sparta way of playing and trying to survive to the number 7 and 22 kicks and punches (my mum just asked me if I have a violent boyfriend who hit me), I was the luxury spectator of both gazelle goals and I shouted to the goalie: YES! IN YOUR FACE BITCH! lucky me, she didn’t understand.

Magali, former patatine, actual Patata-Brava increased the decibels of her PUTAIN to the legal limit. She was punched by num. 22 and she got the yellow card. Yes, for being punched; this was the general issue in the match, they hit you? Is your fault! Thanks referee. However, between punch and kick, she manage to stole some balls, shoot and made num.22 run and suffer. Elisa Collina was totally shocked by the lack of courage of the arbitro. Tireless, she ran the wing, protected the area and tried to don’t lose the mind with the terrible mistakes of Shit in the Pants. Her connection with our goalie was clear, and she caught most of the passes from the goal to the attack.

Núria-Mano-larga was IN-CRE-DI-BLE. It’s time to appreciate the wonderful job that Nú(t)ria does in every match, in every training, in every dinner and Spritz. She stopped num. 69 with all the tools available within the rules, she stopped num. 7; she stopped all the fucking butchers. We have an amazing Capocannoniere, wonderful wings and courageous forwards, but if we win, if we score, if we attack, is because we are completely sure that we had the back covered. In Nú(t)ria we trust, in Nú(t)ria we believe.

It was a difficult match to be the goalie of our team. Elena the Climber was freezing most of the time in the goal. But when the time to act came, she did a wonderful job. With two double penalties executed by the Butcher num.69, to stay in the goal and don’t ran victim of the panic was a huge effort. Elena The Climber did an amazing job, she almost stopped the first penalty and she gave wonderful passes to the forward.

The last match of the year, the probable last match of Gazelle (although we are studying the adoption treaty between Finland and Italy) was a jungle. But my dears, it turned out that the queens of the jungle weren’t lions, it was and is always going to be a herd of Mad Cows. 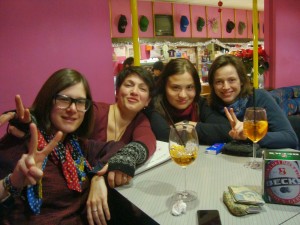