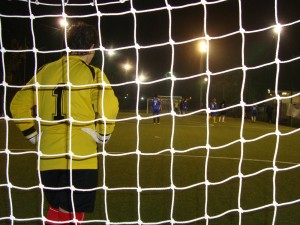 The match against Golden Gaya was epic, funny and plenty of anecdotes to do the report. Thanks girls for making my job easier! First of all, we lost 6-0 but I think that everybody agrees that we had fun both inside and outside the pitch. We played as a team, and as a team we lost, had fun and laughed like in no other match.

With half of the team injured (we have to add Bea to the long list!), sick and high in more or less legal drugs, and the other half flirting with the referee, the Mad Cows played a quite good catenaccio that only number 3, Elena Bellagambi (the name give you a clue of her amazing soccer abilities) and Gazelle Mira overcame. Torito ended drinking wine before we finished the match. He was desperated because of the players crushes, the chaotic last 6 minutes and trying to deal with a team that can participate in the special Olympics due to the number of players sick and injured. However, he was cheering us and I guess he had fun with our madness.

First, as always, our Capocannoniere, Gazelle Mira played a wonderful calcetto. Running more than ever and playing with elegance and without fear, she almost scored our honor goal from the half of the pitch. But as scoring in Golden Gaya goal was an impossible mission she did it in our own goal. Screaming NOOOOO and looking to the Cows on the bench while praying for our benevolence, the entire bench was laughing and cheering her. Our capocannoniere has scored in every single match, no matter where. Tiger Inken was high in ibuprofen and she didn’t catch much of what Jonny was saying (take number threeee!!!). But is just that she was in wonderland trying to overcome the sickness. Running, dribbling and controlling the ball, the Golden Gaya girls had to work hard to stop her. Her connection with Gazelle improves match by match. Our capos are in shape and ready to fight. 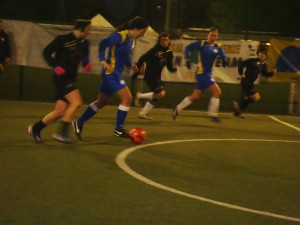 Sanne changed her style of defending from following the player all over the pitch to zone. And it was astonishing to see that she can maintain the position. She is tireless and because of this, she was providing our attack with sprints and pressure. Francesca La Fantastica Asfaltatrice was back on the attack. With all the energy accumulated in the last two weeks of study she was the happiest player of the night. Dancing, biting her own hand and almost killing few Golden Gaya players, she had the clearest opportunity of the match. However, she has better aim in biliardino than in calcetto (the guys of Fiasco were almost crying defeat after defeat). Contributing to our Babel tower she was even talking in German, for the astonishment of Golden Gaya. Inken, who was a bit confused due to the medication, caught the German spirit and did an amazing pass. After the amazing performance of my own daughter, Von Darth Vader was back on the pitch. Breathing more like the Dark Side than ever, and even having some serious difficulties to provide myself with oxygen (you know, the illness) I manage to steal some balls and ran toward the goal. But I was so astonished of being able to steal, control and catch the ball that I didn’t really know what to do with it, so Bellagambi who knew what to do with it, stole it back from me. In addition, I have to say that I’m starting to have multiple personality problem, after that one of the few players who pronounce my name correctly started to call me Laila and LEIA! Mira Heidi Johanna Turpeinen, please, I was so astonished because the changed name that I can’t really answer when you were calling me on the pitch! 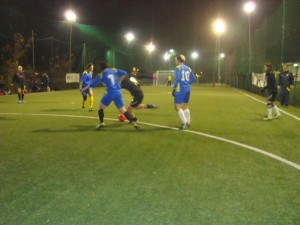 In this match everyone was contributing to do a solid defense. But Nú(t)ria-Mano-Larga and Gambetta Alessia were the ones in charge of maintaining the last position no matter how much they want to attack or how attractive was the referee. The former did an amazing job, stopping everyone and showing her hippy spirit apologizing after stopping CLEARLY the ball with the hand IN THE BOX. Everyone was consternated when the referee didn’t saw it, even Torito was shouting IT WAS HANDS!! our team wanted to fair play, so we gave the ball to the other team… but Mira didn’t understood it (you, know, Italian is not her mother tongue) and started the attack, for the concern of all the players. Inken, that after 4 ibuprofens is fluent in Italian, stopped the attack because GG were not defending. Alessia was running, stealing balls with her fast Gambetta until she was lost in the referee’s eyes. After asking up to 6 times were she had to put the ball, Torito was so astonished by this unexpected crush that implemented the “a tomar por culo” dogma and started to drink wine to overcame the most mad minutes of the cows match. 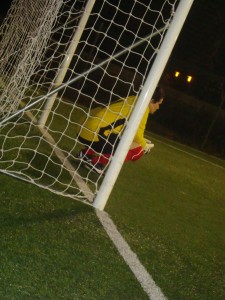 Bea the Miracle started as a goalie, and ended as the honor guest of the bench after injured herself. Prodigious job of our portiere during this hard match. The goals were simply unstoppable, Bellagambi found the spot even when there were not, and the shots from far away were simply magic. Ieva the Word played both as a goalie and defense. She was fast, overwhelming and willing to kill anyone in her way to the ball. When the time of being goalie came, she started to STRECH and WARM UP. Torito was shouting RUN TO THE GOAAAAAL, we didn’t have much time, so she did ran… and start to stretch again next to the goal…

The Curva was amazing. Eskimo-Hanna negotiated with the referee their presence on the bench… and he let them be with us!! She brought us wine and chocolate, and mandarins?! To help our ill bodies to fight during the match.Magalí-Patatine was shouting her favorite word in French: PUTAIN!! After our unrewarded attacks, contributing to our Babel tower and to the astonishment of Golden Gaya players. Emilie- Breaking- Glass was there representing the Ghosts of the cows who fell in the previous battles. With a smile and a EUI outfit she manage to come, pick Gonçalo from the Airport and came back, girls this is truly love and commitment with the cows!!

The mad last 6 minutes, which were the best of the match. They were made of pure happiness and craziness. The stretching moment of Ieva, the autogoal of Gazelle, Torito drinking wine, and all the team laughing were what make us different, what make us a team. As a team we ran, as a team we fought, as a team we lost, and as a team we danced and celebrate our defeat in the changing room (with my daughter as the most motivated dancer). Golden Gaya were shocked of our attitude and they came to shake hands at the end of the game. It was the best match because what matters is soccer and having fun. Numbers and results are for PhD’s and we are not here for that…