On Wednesday, the Warrior Cows had their first match of the season. It was the first battle, but not the end of the war. The “Ludus” girls, from now own Boxing-Kicking-Hugging CF [BKH], played an unpredictable catenaccio. The Cows were playing as a Dream Team. However, shit happens, and the BKH had an astonishing luck, they just shot four times (to the ball, the kicks to our legs doesn’t count) they scored twice. 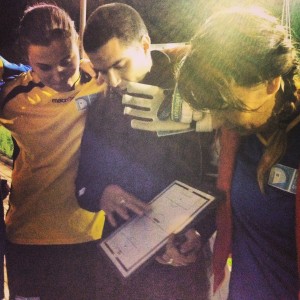 We lost the game, that’s true. It is what the classification and the results will show. However, we were playing as a team, and what team! First of all, our Mister, The Torito of this herd of Cows. He was stylish as Guardiola, cursing as Mourinho, supporting us as our Mums. Thanks for all your work, your patience and your wisdom. We love you, and you know it.

Special mention to the capocannoniere: The Kaiser Inken, she was the queen of the wings. She scored a prodigious goal, not even Messi would do it better.  She had amazing opportunities; our number 9 was as always exquisite in the passes and in defense. Our wing also has a southern representative, Goshua’s mum (also known as “Hamster Tirinnanzi”). As always, the ball seems to have special feelings for her, amazing dribblings and she even passed the ball! The poor striker who was with her didn’t expect such generosity, so a bit of shit happened. The third right wing, Sanne, was running even more than in the trainings, we could see the Dutch style of football when she is on the pitch. Pressure, passion and position, she almost stopped the first goal… with the hand, right, but the intention is what counts!

And what about our defense? Nú(t)ria was, as always, our Maldini, our Puyol and even our Iniesta, shooting from the middle of the pitch. Great and secure defense, that didn’t lost her mind when BKH was kicking and hugging the most. And Mamma mia ragazze la Presidenta-Capitana Marilu Stasi. Always fast, always first, sempre brava… it’s the Stasi Style. 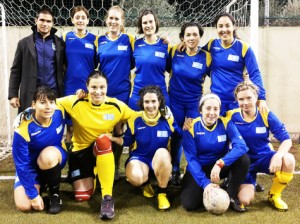 The strikers, we tried, several times, but there was always an annoying BKH hugging us (yes, the short-blonde hair girl). Although that, Francesca La Fantastica had awesome opportunities of scoring. The connection between her and the wings was poison for the BKH girls. And, since they couldn’t catch the ball they hunted Francesca’s shines. Pray for their fast recover… we will need them next week. Hanna Schebesta, the queen of the dance floor was also the queen of the attack, the poor BKH had to cope with “now you see me, now you don’t; too fast for you? I can do it again”. Seriously, to be the defense in charge of Hanna is a nightmare, she is moving all the time! Another special mention to Loredana, the Animal, that on Wednesday controlled herself a lot and ended the match without a yellow card or kicking any leg! Amazing mind control, potent shoots… she even risked her face in the barrier. As always, animal gives us strength and was the beat of our hearts on the pitch. And finally Lai(l)a – Darth Vader Sánchez, you can listen me before you see me, my attempts of breathing are the BSO of every training, and match. I received lots of hugs on the pitch from the short-blonde girl, she even pull down my pants, and we had some arguments. Still, I managed to bother her more than he bothered me. First time as a striker, I think I liked.

THE PORTIERE: Ieva. She started to sing La Macarena at the beginning of the match; she ended with a whiskey-apple juice cocktail. No words for our portiere. Secure, fast and simply brilliant. The word of Ieva is spreading around the world. Visibility and KILL THEM ALL spirit is what she wants, and is what we are going to give her the rest of the season.

And last but not least THE CURVA. Emilie, this mad cow was screaming and supporting while taking care of our most dedicated Ultra: Goshua alias “GIVE ME THE BAAAAALL, NOT THE ORANGE THE COOL ONE”.  Jan and Alberto were successfully distracting the referee, who didn’t know if it was blue or white ball. We were able to defend ourselves from BKH team while he was not looking… well done guys!

Next Thursday more… and remember, that as the song says:

All ends with beginnings

What keeps the planet spinning

The force from the beginning.

We’ve come to far, to give up who we are