Two in a row 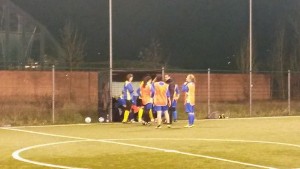 The game was harder than expected, the goals were fewer and the weather was shit. But we learned a value lesson: all the teams have improved. Yet, we are no longer a group of cows. We are a herd; we are a team and a wonderful team. It was the first time we won two games in a row (in Virgin!), that we didn’t receive any goal and nobody was injured. Still, Torito was not happy; this Cowboy can’t get satisfaction with only two goals. Now he wants 5 per game, and we should aim for that. For the sake of his thesis and our pride we should concentrate in every second of the match. It was also a game of “almost” but, frustration after frustration the Cows learned how to control the match and we didn’t panic when the goal resists. 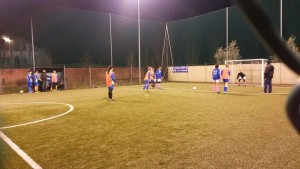 Lucky us, our strikers-wings-they-play-exquisite-whatever-you-put-them were there for us. The Eye of the Tiger finally unraveled how to do a doodle and she was so happy that she can’t concentrate in “important stuff” and forgot her socks at home. She did amazing passes; she ended asking for a striker that does not move from the attack. But she didn’t need any associate; she scored our first goal, and is running for Capocannoniere. With already 6 goals and probably the player with more goal passes, the Iniesta of the Cows failed a penalty. But it was just because the referee was distracting her in a strange language and she didn’t had ibuprofen to disentangle what was going on. The second canonniere of the team was… Hamster Tirinnanzi! (What a surprise eh!). She was kicked and at some point she had the 4 players of A.C. CLO on her. She is pure attitude and soccer poetry on the pitch. She did incredible passes (is improving in this a lot), shot with power and uttered blasphemies in at least two languages. The association Tiger-Hamster is improving in every training and game… Mira you’ll better come back soon and ready, because the Capocannoniere race is on fire! 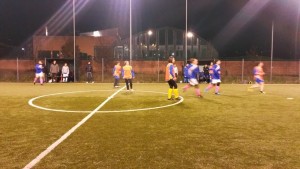 And we start with the “almost” part of the team. Those who suffer the frustration of the inches, the bitter taste of arriving one second later, the ones who feel this small stab each time they saw the ball in the goalie’s hands. Ghiaccio Loredana started well positioned in the attack, however, the passes from Hamster Tirinnanzi didn’t had reward, and she started to concentrate more in defense… number 9 will remember you, Lore. The goal of Sanne, the Blond Torita, was almost there, she had very good opportunities but the ball always caught her off balance or with the wrong foot. And then we have Magali Patatine, who for once didn’t yelled PUTAIN, and who shot many times. A bit forced because of the strong defense of A.C. CLO, the ball didn’t find the net just because she was a bit confused with the 3 different goalies A.C. CLO used during the match. And then we have me, von Darth Vader, renamed by Hamster Tirinnanzi as a “French pitbull”. I ran, I controlled and then I shot, I do all the difficult part, but then the ball never finds the net, just for few inches. As I can’t score, I concentrated my efforts in passes to players who have quite better aim than me. Finally I ended in defense because, my dears, sometimes you have to step back to go further. 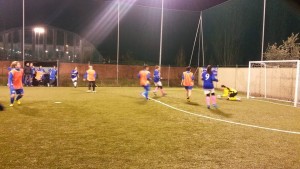 The defense was strong and becoming attack most of the game. Nú(t)ria Mano Larga the Cake Monster was a bit slow at the beginning, feeling my amazing cake and the chocolate she had eaten one hour before the match. The second player without socks got warm after few minutes and joined the attack. She believed she can fly and after an amazing corner (sorry girls but I did a very nice pass) she almost score for us. Gambetta Alessia was frozen, asking if she can play with the jacket and wondering why did she started to play football. However, she even dared to ran and come to the attack. She started to be more confident of her gambetta and started to play hard against A.C. CLO. Good job!! Finally, Ieva the Word started really, really worried about the cold, the rain, the ball that seems to escape from her hands. But nothing affected her kill them all way of living football. Concentrated and with catlike reflexes, she stopped all the shoots and she kicked all the balls (and some players). The box is her kingdom… long live to the queen! 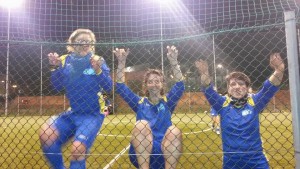 And last but not least, our Curva. In a frozen, rainy day is hard to be there, and only the true Cow lovers are able to support with this weather. Bea The Miracle was there for us, taking care of the mascot of the team and the wine; she encouraged our attacks and defense and even more important: she improved as a photographer. Goshua give-me-the-good-ball invaded the pitch excited for our victory. Tireless, you can see him running up and down the wing; he was the striker Tiger was looking for. Finally, my dears, next time we have to do it faster, better and stronger. Inch by inch until the goal comes.