V of Vendetta… and Victory! 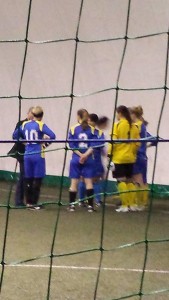 On Friday the Super Golden Cows played more than a game, the herd had its Vendetta. With the I love too much this game to this shit in mind, the team was expecting to sweat blood to get the victory. It was a hard and important match: if we win we will play the Golden League, if not The Silver one. But, the Golden Cows can get no satisfaction with a simple silver league…

After the tour through Tuscany, we arrived to Campo Bisenzio, where the glory was waiting for the herd. Torito was dressed for success and quite exasperated because of the lack of referee professionalism. He used most of the dictionary elaborated few hours before and some of his own. Still, he managed to keep calm and cheer the herd on the pitch.

We started with a wonderful goal of Anne PushUp-PushUp who was very happy of being allowed to kick as much as she wanted. With powerful shots, breathless sprints (even suffering a little asthma attack) she fought each ball, each inch of the pitch for the glory of the herd. She was not only in the attack but in defense, well everywhere because she is always moving on the pitch. Prodigious job saving us from Liberta’s counter attacks, few fouls, all of them necessary. Also in the attack and all over the pitch was Hamster “dottore” Tirinnanzi, who wants to make the Capocannoniere a very competitive title. With her Italian-Spaniard spirit, she was pure passion, energy and wisdom on the pitch. Beautiful and precise passes, her calm and experience help us to control the game. She did some of her soccer tricks and controlled the rhythm of the game. She scored two goals and she has already 13 in her personal account. Still, the Capocannoniere is one week more Gazelle Miracolo (what a surprise eh!). She was feeling a bit ill during the day, but she managed to exasperate the bitches, ran the wing several times, and score 3 goals… the 20th one is recorded. But, the most noticeable improvement of Miracolo is not her aim, is her ability to do passes. She passed the ball to Torita who was ready to kill. The goal of the Torita provided us with more confidence and calm when the Bitches were hitting the most. She almost scored a second one with the exactly the same strategy: she is the queen of the second stringer. Despite the improvements of Gazelle with the passes, the most generous player of the herd is Tiger Inken. She helped Miracolo to unravel where to shot the foul, worked hard in defense and distributed the ball with intelligence; she is a solid pillar of our herd, a pillar that we are going to miss soon. Liberta’s bitches were scared every time she touched the ball, they knew that Tiger wanted her vendetta, still she stayed calm and gave an exquisite soccer lesson. Loredana Ghiaccio was our guide on the way to the pitch. Feeling at home and with most of her family in our Curva, she showed (finally) her animal instinct and pressured the bitches until recovering the ball. The goal is just a matter of time. 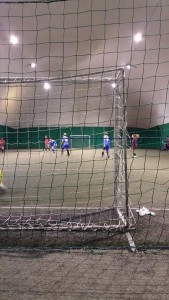 Our defense was strong, fast and precise in their task. Nú(t)ria Mano Larga ended with the mark of the ball in her leg after a potent shot from actress number 8. She is fast and, as Miracolo said later with a mojito in her hand, one of the most intelligent players we have. Fearless and a bit angry with the referee after receive some nasty fouls, she didn’t lose the calm and stopped bitches theater club in most of their attempts of goal. In charge of the defense was also Marilú Captain and Commander. She was very well positioned, and stole and cut most of Bitches passes. She even did an expedition to the attack and shot a couple of times. With these kaisers in defense, we don’t have to fear any attack.

And finally, Ieva the Word, who did amazing saves and sent balls to the other half of the pitch for the astonishment of Liberta’s actresses. Secure and, finally, remembering that there is a line that she cannot cross with the ball in her hands, she did a great job. The goals were simply unstoppable.

And last but not least, the Curva. We are so famous that one of our fans from Barcelona came to cheer the team, Fran Sensual Bachata was amazed with the quality of this herd. Torito was very proud and show off all the time how his players can beat anyone if they want. Jofre the Dog Whisperer was in charge of Goshi-Give-me-the-ball, a hard job especially if you have a glass of wine in your hand. But our four paws fan not only cheers the team, he also helps them to warm up, stealing balls and don’t letting Tiger to recover it easily. Loredanna’s family were supporting us and having a very good time with Goshua, the ball and the herd. And finally: Darth Vader. I was suffering most of the time outside the pitch, my nails are completely destroyed, I cut my tongue biting the plastic glass and I showed how much I’ve improved with the parolacce.

But this match has a third part. It was on Friday, so the Herd went to celebrate the victory instead of going to Sax Bar. It was a great night with lots of anecdotes and we discovered that Anne PushUp is not the most flexible player on the dance floor. But what happens in Backstage remains in Backstage.