Veni, Vidi, Vici… or how to write a report without actually watching the match

On Monday [9th of December], the Mad Cows returned to the path of the champions. We weren’t playing in Virgin pitch and, as visitors, the Mad Cows always play their best soccer! The herd of cows won 4-1 but, the best thing of the game was that there were no bitches! Well, just one with four paws and she was more interested in Goshua than in killing anyone (although Goshua was more interested in the balls…). 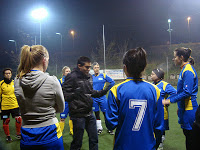 The match started with a confused Torito. But, despite his initial disorientation, he succeeded in guiding this herd of cows through the victory. Girls, we are driving him crazy with our chiacchiera and last-minute-improvisation but, at least we weren’t talking about shoes… so, we are improving!!

The competition for the Capocannoniere is on fire! Tiger Inken presented her strong candidature with 2 goals. She told me just one day before that she was vey happy with “just giving goal passes”. Yes, sure… after the reaction to her second goal I seriously doubt it (yes, everyone saw the jump and listened “IT WAS WITH THE LEEEEEFT!!”). Maybe it was a strategy to distract Gazelle Mira. Strategy that didn’t work… because Mira scored twice (she is in the top 5 stickers of the league!). Again, our Capocannoniere scored even without noticing. She starred the funniest moment of the night: After scoring the goal, the referee asked her to turn around, so he can check her number. She reacted with a panic face, saying “I didn’t do anything” and looking for Italians to translate: MIRA YOU SCORED IT WASN’T FAULT!! 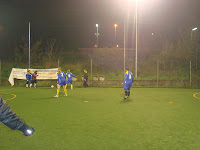 The toritas, this team inside the team, showed that their association in the pitch is as good as outside it. The connection between Hanna-the-Eskimo and Sanne (I really have to work in your nickname) is such that they don’t need to look to each other to know where they are. Both of them had the goal quite close. Be aware rivals, they are coming. Francesca J. played her second match with us. A nightmare for the defense, she was faster, smarter and stronger than the nice girls from Mugnone. However, sometimes effort does not have the reward we expect but, it’s just because she is trying to give some advantage to Mira and Inken in the race for the Capocannoniere. 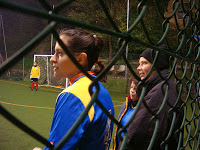 We also had two debuts! Beatrice showed her strong candidature for the defense of the year, she implemented the no-one-shall-pass dogma. Nútria and Marilú C.C. you’ll have a huge competition for the best defense! But they should also be aware of another strong defender: Elena-The Climber performed as a total professional. She didn’t get nervous when Mugnone was attacking (friendly) the most. The captain of the match showed that with her in defense, we are safe. The other debutant was Danai-Pum!-I’mSorry, who controlled herself quite well. Instead of injuring cows, she was almost killing one of the players of Mugnone C5. She was so scared the rest of the match that, every time she was changed, she asked the Curva if she did “touch” any other player. Danai, you’ll be our secret weapon against Libertas bitches!!!

Bea the Miracleshowed her feline reflexes as a goalie. Ieva, you’ll better recover soon if you want to maintain your position. Bea showed that she also has a “I’m going to kill you” attitude… with the coach of the other team. The desperation of the coach was such that he kicked the ball with power to kill Bea… without success. 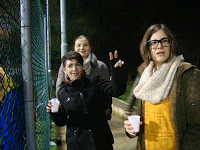 The Curva di Lusso was cheering to our Cows in the mist. Sara-The-Hamster was complaining because we didn’t sang until we lost the voices; Giaccio Loredana was asking for visibility to Torito; Ieva the Word was pushing up the Curva after the consumption of espressos; Nú(t)ria-The-Photographer was making pictures, drinking wine and giving crisps to the players (ehem); Von Darth Vader and Goshua-Give-Me-The-Ball were playing in the muddy Playground most of the time… but, you know, I don’t really need to watch the match to write a report.