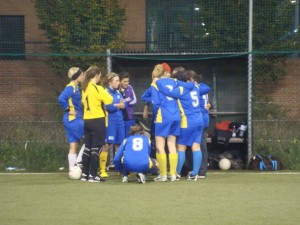 The third match of our brilliant Mad Cows seems to confirm the tendency: what happens outside the pitch is equally interesting to what actually happens on the pitch.

Firstly, I want to point at this mystic state of stars of Wednesday night which obviously put the Mad Cows under influence of some very unhealthy vibe. Whatever the reason, the God of Injuries is obviously still clubbing heavily somewhere else and has totally forgotten to take care about us. Thus, I have to start with sad news: our Bombardiere (is there such a word?), Capocannoniere, 5-in-a-game scorer, Goshua’s mum/sister (data are still not reliable on that) has her toe broken. Latest medical reports confirm 14 days with a cast and then the following rehabilitation period. However, there is still some brightness I can offer you: our Capocannoniere has promised to bring Goshua to the games and even trainings (if it is not raining). Hurraaaaaaaah!!!

But wait, this is not the end yet. And probably we should indeed book a room in Careggi. Already when being in Sax Bar and doing the usual stuff, another bad news arrived: Marilú went to the hospital after the match due to an allergic reaction. Rumor has it that Loredana wanted to poison her – and to disguise these evil intentions she baited all the team with Kinder chocolate after the match. However, there is also a more reliable hypothesis: a possible sabotage, launched by Ludus, who probably haven’t been very happy with the description our brave Editor in Chief Von Darth Vader dedicated to them (remember Boxing-Kicking-Hugging ?). Even the Curva members were close to ending it up in the hospital: Lai(l)a Fox Sánchez Von Darth Vader almost killed herself coming back home from Sax Bar. Some slight misunderstanding between her, the bike and the chains of Duomo square.

THE GAME (the development: 0-1; 1-1; 1-2; 2-2; 2-3). We were wonderful, both the Team and the Curva. We lost, but with sense of fairness and much of pride. We played against Floria 2000, the team which is among leaders and had won the previous match 10-0. They thought it would be an easy win because of our Ludus accident but, from the very first seconds, all they got was a cold shower of reality check.

Actually, they won because they had a genius score-maker who did all 3 goals of Floria 2000. What a coincidence, their striker and our goalie were American. Spectacolo was ensured. Thus, Anne-PushUp-PushUp could exchange some reflections on weather conditions in the USA, or whatever the usual conversation is when the striker runs towards the goalie with the speed of 30 km/h. Frankly, I have no idea about more concrete topic they could have, I usually pray in Latvian when that moment comes. But still, Anne was great and fearless on the goalie line.  Confident in stepping out and meeting opponent/ball outside the goalie territory. Flying in the air (apparently, too much influence of R. Kelly in her childhood). And saving us from 1 to 1 attacks in the first half and from 100%-ball-went-into-box moments in the second half. As mentioned earlier, Floria team simply had a very good striker – she scored the first and the third goal almost in the upper corner of the box. Truly beautiful goals, if I may (quietly) admit.

We fought and tied the match 2 times. And all development of the game was that we were on our way to make it equal again when we had unfavorable situation of 2-3. But time is time. And this game it played on the side of our opponents. The last attacks of Mad Cows were full of enthusiasm, force and… several gateposts… Unfortunately.

And what goals did we have!! Both scored by Gazelle Mira, who is not simply running with the ball, she is literally dancing with it. A nightmare for every person in opponent’s defense! You simply have your eyes going each to different direction and head dizzy if you try to follow the movements of Mira’s leg for more than 5 seconds.

She was supported with another forward of equal energy and spirit, the most competitive member of our team (not counting me) – Tigretón (former Kaiser) Inken. I doubt she even knows how to walk normally because every time I looked at pitch she was running. Running, jumping and fighting as tiger till the very last second of the match when she almost collapsed on grass. Full of disappointment and tiredness but what to do – that’s life. And yes, Goshua’s sister Sara. As always, she was married to the ball, they both inseparable, unless some kicking from Floria’s team. I would dare to say there was even a bit too much of passes (we probably didn’t have to tease her about it before the game). She was the most supportive attacker anybody could ask for. That’s how we saw a bit less of those middle-pitch Sara’s shots, famous for their force and precision. Probably that was exactly the amount of rage our team lacked in the middle of the game.

The defense was supreme. Marilú, despite her allergies, displayed the Stasi Style that made her famous. The American girl was getting crazy due to her speed and strength in defence (she got a yellow card, but the referee didn’t understand that it was part of the StasiEra style). The American girl thought it would be easier when Marilu left the pitch to take some rest, but… Gambetta Alessia was there ending all hope. Too fast for the Floria strikers, she got most of the balls, and opponents eventually started to shot from far away, hopeless and frustrated.

The attack was completed by Sanne (still nickname-less!) who was never tired to run. Fighting for each ball from the attack to the middle pitch, she recovered the balls for our team. Loredana – finally ! – showed her famous animal instinct, and she had amazing opportunities, her legs are two powerful weapons that kick every ball closer to the goalie of the opponent team. Magali was again close to the goal, she risks the life of her own and others to protect the ball and shots it without mercy. The return of Juana Cra-Cra was one of the most exciting moments, the Curva was waiting for her, Eternal was her personal reporter, taking pictures and videos of every single exquisite movement on the pitch. 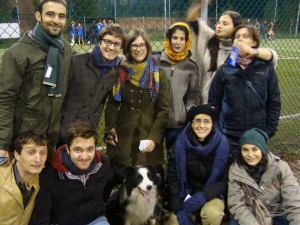 And, yes, the CURVA. We did all we could. Took care of Goshua the Mascot (please, nobody tells Sara about those couple of times we didn’t know exactly where he was). Drank some hot tea. Drank some wine. Lost our voices in shouting and singing. Drank some more wine. And did I mention singing? Found a correlation between the following variables: „shouting PushUp PushUp!!!” and „Mad Cows scoring a goal” – it worked in the case of both goals. Thus, it goes without saying that our internal passion for research got its share of satisfaction. Causality, though, wasn’t yet proved and for that we might need more experiments in the nearest future.

Last but not least – this report would not be complete without mentioning the EUI Squadra allenatore, Jan Karremans the Poet. He is declared responsible for the lyrics of Mad Cows’ official anthem (melody of “Seven nation army” – White Stripes). Well, there is only one line at the moment but we believe it is already the best of all others yet to come. And yes, you probably have guessed it yourself: WE ARE HERE FOR THE CO-O-O-O-O-O-O-O-WS!!!