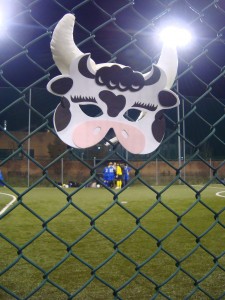 Last Wednesday the Golden Cows came back to the victory path with an historic 13-0. The legend of this wonderful team is spreading around the world, and Guardiola & Montella are trying to get a video of the match to show it to their pupils. In the first 4 minutes the Golden Cows were already winning 4-0, with a very relaxed Torito whose wisdom is starting to kick in our minds and feet, and whose work sometimes have the reward of being the happiest Cowboy in the world.

Our Capocannoniere seemed to be especially motivated after last week without any goal, so she decided to score 5 of them. Gazelle Mira was fast, accurate and doing all the hard work to finally… PASS THE BALL!!! Knowing that after 5 goals she was condemned to the bench (where she was playing with a ball), she decided to join the Curva and play with her alma mater Goshua, who is the only one able to stop her because at the end he has 4 paws to catch the ball. The second Capo of the team and night was Hamster Tirinnanzi with 3 goals and quite wonderful passes. Yesterday she didn’t showed us much bad language but an amazing drama performance falling on the floor blaming all the Gods of the humanity because of her bad luck. 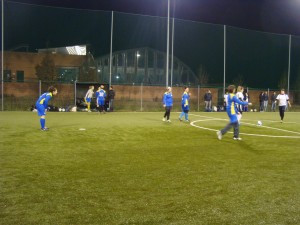 As always, the ball is pure poetry in her feet, and she was trying to pass it as much as possible, mainly when she remembered. Yet, the competition to be the Queen of the Capos is not just about two, because Anne PushUp-PushUp scored twice! She was the happiest Cow of the team because her fiancé is coming to Florence soon and she agreed to play in all the positions and wash the t-shirts. She started as a striker, pass through defense and ended as goalie. She managed to score two wonderful goals, and the most important: SHE DIDN’T DO ANY FOUL!! As reward she can kill every single player of Libertas’ Bitches next week like this. 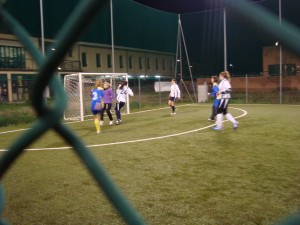 But not only the “usual suspects” scored. Magali Patatine was fighting with passion every ball, maybe with too much passion sometimes. She collaborated in defense, did very good passes and finally had the reward to her effort with a very nice goal situated on the corner of the goal. Her lack of excitement in the celebration contrasted with Sanne’s one. After trying a lot during the entire match and doing an exquisite work in defense, the Blonde Torita had the desired reward of a goal. She screamed a suspicious YES! and ran to hug Torito, who was very proud of his herd. Giacchio Loredana was very, very, very close to the goal the entire match. She really deserved it, but sometimes soccer is a bitch and does not reward effort and passion. However, she performed at a top level, did great passes to the rest of Cows and showed her animal instinct catching balls in the mid-field. 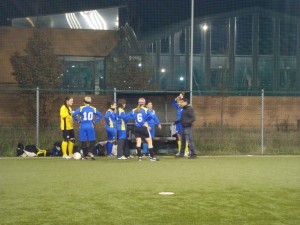 It was not just a match of goals but also a match of returns. Gemma came back performing at a sublime level, but she was a bit bored in defense, so she decided to join the attack with amazing results. First shot, first goal, probably the most beautiful of the match. Distributing the ball with wisdom to the wings and forwards, she provides us with order and security. But Gemma was not the only player bored in the pitch, Ieva the Word was freezing, talking with the Curva and trying to play with Mira while she was in the bench. She only touch the ball twice as a goalie, because on the second half she was… striker! Great Five defenses was totally scared of her, and she was shouting fuck and shit all over the pitch, substituting Hamster Tirinnanzi as the player with worst language. She did two goal assistances and she won an Oscar for the Drama Queen Cow. Rehearsing for Friday’s play, she didn’t listen the referee: she thought it was blue ball, so she keep playing even when the referee said it was white. She felt on her knees appealing for the ball… in English! Hamster Tirinnanzi had to clarify that she always plays as a goalie so she does not understand the rules quite well, while the Curva was crying from laughing. 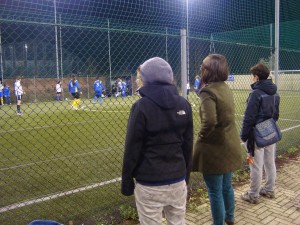 Last but not least, the Curva. It was the first time for Tiger Inken in the frozen Curva di Lusso. And each time the game stopped for whatever reason she jumped onto the pitch to play with Gazelle Mira. Nú(t)ria who was supposed to play, finally joined us and was in charge of the wine, in charge of drinking it more than in serving it because she was celebrating her new job. Bea the Miracle 2.0 had lots of work reporting the results for the missing Cows and taking care of the mascot Goshua. Our four paw supporter was making friends with Midland workers while playing with them, well done Goshua, next time you’ve to ask the phone of the cute guy. Watching the match and also making friends among Midland workers was Gemma’s boyfriend, who was astonished with the Cows and looking for something warm to drink in the frozen curva. Darth Vader was almost jumping into the pitch to play and probably score, but finally I decide to take notes as a good reporter, because my dears, it was a day of Glory and the world must know about it.

Special greetings to our two biggest fans from Barcelona: Mr. and Ms. Bull who seem to feel the passion for this team as much as we do, asking to their Vitello for information as soon the match ends. Because as Torito said: “the Mad Cows are an addiction”.

And finally… See you on Friday 21st in the revenge against Libertas Bitches Rugby Club. I am ready, and you?