has the pleasure to invite you to the book launch: 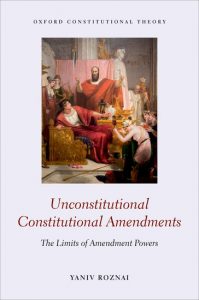 The event will be chaired by: Prof. Gábor Halmai and PhD candidate Bartosz Marcinak

with the intervention of Tarik Olcay  (PhD candidate in Law, University of Glasgow) who will also present the paper: The Organic Justification for Constitutional Unamendability

To receive the materials on which the disscussions will be based, please write to [email protected]

We hope to see you there!