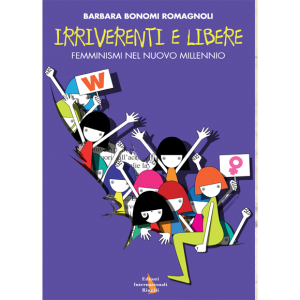 This blog-post is based on a talk by Barbara Romagnoli in June 2014 at the EUI, following an invitation by the GRaSe Working Group. In her book “Irriverenti e libere. Femminismi nel nuovo millennio”, freelance journalist, beekeeper and gender studies researcher Barbara Romagnoli tells the story of different Italian feminist groups and/or individual women from 2000 to the present. In her presentation, she talked about three of these groups – Sexyshock, A/matrix and Sommosse.

In the 21st century, a number of new feminist groups emerged in Italy. They importantly distinguished themselves from historical feminist movements by emphasizing imagination, creativity, individuality/intersectionalilty and the use of new technologies in promoting their goals. Three of these groups will be introduced here: Bologna-based Sexyshock, A/matrix and Sommosse.

Sexyshock is a movement situated in Bologna which uses imagination and irony to subvert the connotation of sexuality endorsed by the dominant culture. Members of the group use the collective name “Betty” to refer to themselves, both in their internal and official communication.

The story of Sexyshock dates back to 2001. On the 30th of June, about 3,000 colorfully dressed women took to the streets of Bologna’s historic center. It was a very joyful demonstration: lots of music, plenty of irony, very little antagonism. This is the day Sexyshock was born. The group, mainly composed of women, took quarter in a squatted house, the “Teatro Polivalente Occupato” in Bologna. Sexyshock wanted to create a political laboratory and forum for discussion open to every woman. Their agenda contains gender-related issues including safety, work, biotechnologies, bioethics, language, communication, sexuality. It is their goal to liberate sexuality from its representations in pornography and mainstream media, and to bring it back into the realm of imagination, pleasure, fun and mutual respect. Their weapons are imagination, a great sense of self-irony and a playful approach to sexual identity. For instance, they use the “@” [at sign] to identify political action of the collective as opposed to the individual, and also to avoid specifications of gender. [In Italian, the “@” is often used to symbolize the inclusion of both the masculine and the feminine form in nouns and adjectives]. Sexyshock is in dialogue with the historical feminist movement, but they also interact with pink/queer activism. They regularly organize playful political actions, such as the “Acrobatic Irony Championship” or the “Macho Free-zone” for the prevention of rape and gender violence. Over the years, they have also organized a number of seminars.

Sexyshock opened the first sex shop in Italy which was run by women and which, most importantly, targeted women. More than 10 years later, the project continues in the Betty&Books facilities, a cooperation between Sexyshock and the cooperative Ibiscus. It is a shop specializing in sex toys, books, designer and collection items. Today, this shop is only available online, at http://betty-books.com/.

A/matrix is another group which used activism in a creative and playful way. In one of their documents, you can read: “Post-Ethics Law Era. A Life is Born: The Show of Life. Large slim letters dominate the entrance of the clinic and recur as miniatures everywhere, also next to the classic restroom signs, where an embryo is shown between the reassuring icons of a man and a woman. My urge is growing. I have to rush. Smiling at all the people that I meet in the corridors – as instructed by the code of conduct that I learned at the job training right after being hired – I slip into the restroom. Just in time. I close the door and… ahhh. It is intense, irresistible. I almost pass out. It is pushing away from my body, unstoppable. It flows out amidst warm fluids, and I watch it as it unwinds to the floor. Yes! My dorsal tail. A small monstrosity, the result of who knows which genetic mistake. It rubs itself against my hand and then it gently crouches between my legs.”

This is the beginning of a science-fiction short story written collectively by the women from A/matrix. The group was founded in Rome between 2001 and 2002, right after the events surrounding the G8 summit in Genoa. After participating in working groups at the social forum – including leftist ones – many women felt unease, because political language and practices were the privilege of men. A/matrix thus established itself as a women-only organization, composed of women who knew and experienced Italian historical feminism. Feminist scholars, such as Barbara Duden and Donna Haraway, as well as female sci-fi writers, such as Octavia Butler and Joanna Russ, inspired them.

A/matrix enjoyed creating new ways to express their political convictions, particularly to highlight the intrusion of the catholic culture on female bodies.

In 2003, A/matrix wrote a Logbook that was published in the French periodical “Multitudes. Revue politique artistique philosophique”. It read: “Isn’t it true that feminism is the mother of all networks? That the horizontal discussion brought about by the pioneers of feminism was often denied, obscured, suppressed, or marginalized as a footnote? That feminist groups have transformed their intolerance towards the vertical hierarchy – typical of the capitalist system, the parties and the movement – into aims and initiatives of micropolitics which have been able to unsettle the given material, symbolic, conceptual, and sexual order?”

A/matrix claimed a multifaceted feminism, with room for fluid, precarious, mixed, global and local identities. They aimed to subvert the collective imagination and refused inflexible definitions of gender or sexual orientation. When activists were asked to describe themselves, they would call themselves “post-, trans(genic)-, pop, cyber-, radical, meta-, hyper-feminists.” They criticized both the essentialist take of sexual difference theory, as well as unfruitful equal opportunity policies of the eighties. Instead of promoting approaches where a presumed “female” would mirror a “male”, they were pushing for an antisexist society where “the only law is the law of desire”, as they said in one of their slogans. Importantly, they wanted to be politically active for their own pleasure, and to have fun. Meeting at private homes, they would to exchange ideas over a good dinner. Their imagination was fuelled by food and drink, and ensuing discussions were continued over their mailing lists and eventually led to action. As a result, their activism was not short on irony and creativity.

One of their earliest actions was a contribution to the debate on a law on medically assisted procreation in 2002. Among other things, this law would give an embryo the status of a person, overshadowing mothers’ rights and granting the State power to govern women’s bodies and their reproductive choices. To oppose the law, A/matrix disseminated golden-coloured eggs with the slogan “the chicken came first” throughout Rome. They also produced an irreverent “Handbook for Rebelling Chickens” which was circulated online. It was a do-it-yourself guide for civic disobedience. For instance, it suggested pinning stickers on vacant bus seats: “This seat is reserved for embryos in fulfilment of Law n. 40.”

The organization “Sommosse” was formed in the aftermath of a tragic incident.On the 30th of October 2007, Giovanna Reggiani died after being assaulted and raped by a young Romanian man in Rome. Italian institutions reacted with repression, and racism was incited against the Romanian community and against Roma camps. Male violence against women was hardly discussed.

Women’s movements in Rome reacted promptly. A petition and a nationwide demonstration for November 24th (the day before the “International Day to Eliminate Violence against Women”) were launched by a public assembly consisting of women’s associations, feminist and lesbian organizations from all over Italy as well as individual women. The text of the petition read: “The prevention of violence against women should not be connected – as some people argue – to urban safety or public policy issues. Male violence does not discriminate based on class, ethnicity, culture, religion, or political beliefs. … We are going to take the streets to reclaim our autonomy and demonstrate the power of political action.”

The reactions to this document, coming from all over Italy, were immediate and enthusiastic.“Sommosse” was created in the wake of the huge success of the demonstration. It was conceived as a network for women, hosting some of the extremely diverse voices of the Italian feminist movement at the beginning of the 21st century. It employed new technologies to facilitate relationships between women across the country. The results were mixed; the network’s mailing list often became a place of personal disputes. This especially pushed away women without an activist past, who were mobilized by the demonstration.

A few months after the demonstration, Rome hosted a national assembly entitled “FLAT – femministe e lesbiche ai tavoli”. About 400 women talked about violence in all forms, from the most evident ones to those that are less reflected upon, such as institutional violence which translates into free-market policies that increase economic and social discrimination. By the end of the two days, there were numerous proposals for concrete action. The most novel one included the ‘income for self-determination’ which was proposed by A/matrix and supported by a number of radical collectives. This proposal was grounded on feminist theories on domestic and care work from the seventies, with the purpose to find a balance between the precarity of lives and women’s desires. In the assembly, many conflicts arose between different generations of feminist women, as well as in gender-mixed political groups. Nonetheless, a number of actions were decided upon, and some carried out right away.

Even though this assembly had been very successful, the Sommosse Network would lose its attraction already a year later.

The stories of these 3 different groups/projects exemplify important characteristics of the Italian feminisms of the new millennium:

“Irriverenti e libere. Femminismi nel nuovo millennio” – the book which was the basis for this blog-post – attempts to fill a memory gap by documenting the history of contemporary Italian feminism. In the seventies, feminist movements produced a multitude of flyers and written documents, which are kept in feminist archives all over Italy. Today, feminist groups mostly communicate via internet; this makes remembering difficult, because all the text which is put into blogs, tumblrs or websites will be lost as soon as, for example, payment for the web domain is stopped.