GRaSe in Rome: we are unstoppable!

No, it is not about the Vatican, but there was some grace in Rome last Saturday. For the 20th Rome LGBTQ Pride, members of the Gender, Race and Sexuality Working-Group send a small delegation and its slogan. 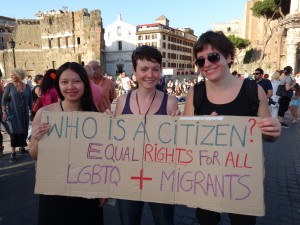 Claiming equal rights « fuori i diritti », 200 000 people marched together in a cheerful atmosphere the streets of Rome on this shiny day. The parade was not only the opportunity to display the strength of the LGBTQ community (Lesbians, Gays, Bis, Trans, Queers), but directly to address politicians, opinion leaders and the watching crowds on the issues ranging from equal family rights (marriage, adoption, procreation) to a better and more comprehensive healthcare coverage, to easier transitions for « T ». A rich program of events and roundtables had been organised during the preceding week, to discuss these issues, some reclaiming the now famous Conchita Wurst message at the last Eurovision song contest. 20 years after the first LGBTQ Pride in Rome, the current Mayor appeared on the frontline, displaying his « ally » status. We will however remember that on that same day he allowed the extreme-right group Forza Nuova to demonstrate against these equal rights.

Even more interesting was perhaps the speech of the QueerLab activists, which reminded the parade of what being unstoppable means. Fighting intersecting oppressions of gender, race and sexuality, but also of class, is struggling also on migrants rights, against precarity, for the preservation of common spaces, for free and safe abortions, and a more comprehensive welfare for all.