Zwarte Piet and the Chimney Myth

In the controversy about the blackfaced figure of Zwarte Piet, defenders of the tradition often try to downplay accusations of racism. A very common argument has it that Zwarte Piet is black because he climbs down chimneys. This argument, it turns out, is not in line with the tradition. Zwarte Piet was never quite white. Like other features of the character’s iconography the chimney element emerged in a discourse of inequality. Sinterklaas stories in Dutch newspapers show that Piet did not become black because of soot. Rather he was given the dirty job of climbing chimneys because he already was black and therefore considered inferior.

Italian Chimney Sweeper
An often-heard explanation to justify Zwarte Piet’s skin colour holds that he is black because he ascends down chimneys. Like many other properties of the character, this particular narrative is based on a children’s book: Lisa Tetzner’s The Black Brothers (Die schwarzen Brüder) that was originally published in 1941. Applied to the Dutch tradition, the story tells that Piet was an Italian chimney sweep (spazzacamini) who started working for Sinterklaas. This narrative, which only originated in the 1980s when people pointed at the racist elements in the character of Zwarte Piet, functioned as a defence mechanism that could nicely explain away two accusations. First, Zwarte Piet was black because of the soot inside the chimney. All chimney sweeps in The Black Brothers were black after all. And second, the fact that Zwarte Piet was originally from Italy justified his poor knowledge of Dutch.

The first part of this argument still haunts current discussions. On social media people often state that “Zwarte Piet is not a Black man, he is black because of the chimney. This has nothing to do with racism!”. Sinterklaas stories in old Dutch newspapers, however, show that the original chimney story line took a rather different form. Zwarte Piet was never an Italian chimney sweep; he was already black before he had to climb down dirty chimneys.

Black Already
Sinterklaas stories in Dutch newspapers describe Zwarte Piet in denigratory terms. Time and again words like “nigger” (nikker) and “blackamoor” (roetmop) are used as synonyms for Zwarte Piet. He is often depicted as an ignorant black servant. And this is exactly the role Zwarte Piet plays in chimney stories. Interestingly, early narratives tell that Sinterklaas himself climbed down the chimney together with his horse to get the carrots that children left on the mantelpiece. The soot never affected his face, robe or white horse. Other story lines describe how Zwarte Piet just threw candy through the chimney from the roof without climbing down. The sweets always miraculously ended up in the children’s shoes.

As soon as Zwarte Piet started ascending chimneys in the stories the soot did muck up his face. But this hardly mattered because he was black already. Indeed, it is exactly because he is an ignorant black servant that Sinterklaas orders him to do this dirty job. Take, for example, the following quote from a children’s story:

But when Sinterklaas climbs down the chimney he will get dirty’, says Mies. ‘Sinterklaas will stay on the roof. He has a black servant. When he [Zwarte Piet] ascends it doesn’t matter because he is black already.

In similar vein, the figure/poem below argues that Zwarte Piet is not affected by soot or smoke because he is black already. 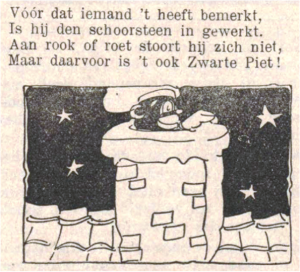 (Translation: “Before anyone could notice, he climbed down the chimney. Smoke or soot don’t bother him, because Zwarte Piet is black already”)

In short: Piet’s black face, founded on racial stereotypes and clearly recognizable as black person, was already part of the Sinterklaas stories before authors added the chimney theme. The chimney, in turn, gave rise to yet another round of stereotypical story lines about an ignorant black servant who needed to carry out dirty jobs for his master. When people started using the chimney theme to explain away racism, they still drew on denigrating discourses probably fuelled by contacts with immigrants. In one of the earliest versions of the chimney myth, for example, Zwarte Piet explains why he is black in very poor Dutch:

A little boy was deeply afraid of Zwarte Piet because he was black. ‘But that’s the reason why me is called Zwarte Piet. Because me ascends down chimney me become very black. For this reason Sinterklaas calls I Zwarte Piet’.

Drowning Man
What can we learn from this chimney history? It first of all shows that a drowning man will clutch at a straw. The chimney myth was invented by people whose customs and childhood memories were called into question. It’s only very logical that they tried to protect what was dear to them. The chimney myth was simply a defence mechanism invented in a moment of psychological need. It reversed an existing repertoire in order to explain away accusations of racism. Thus, a story about Sinterklaas who fobbed off the dirty work onto his inferior black servant was changed into one about a white Italian chimney sweep who became black because of his craft. The fact that this narrative added insult to injury by drawing again on racist stereotypes (i.e. an Italian immigrant with very poor knowledge of Dutch) firmly proved the point that the complainants were trying to make.

The chimney myth also points to a deeper layer in the Zwarte Piet controversy. It shows that the character of Zwarte Piet is inscribed with denigratory histories, of which the chimney element – in its different manifestations – is but one example. One could easily trace the racist origins and genealogy of other features of the figure’s iconography, including the golden earrings, big red lips, and colonial attire. The current debate makes clear that it is almost impossible to defend Zwarte Piet without enacting these histories. The only way to erase racism, it seems, is to radically disassociate ourselves from the whole tradition entirely.

Hans Schouwenburg is PhD candidate and lecturer at Maastricht University. This is the second of four entries in a series on racism and Zwarte Piet on The GRaSe Blog, which we publish in the wake of the Saint Nicholas festivities. For the other articles, see “The Colonial Hangover of The Netherlands” and “Zwarte Piet once again.”