This time of the year, as every year, when Christmas is approaching and days get shorter, people start to talk about gifts and candies and…. the world discovers that the Netherlands (or shall I say ‘also’ the Netherlands?) is racist. As you may all know, this is due to the fact that the traditional Dutch Christmas celebrations have a Black character as one of the protagonists: Zwarte Piet. I am not going to describe once again how this character looks like, where this tradition originates and why it is contested for being racist. So much has been written about it by people who are much more competent than I am, and who are directly involved into political and intellectual work about this. As GRaSE, we are trying to gather this material on our blog and Facebook page so that people can navigate through it and find ideas on how to tackle this issue. 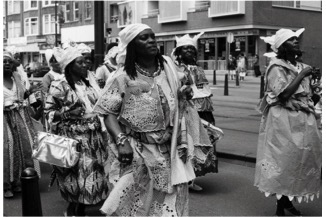 What I would like to do here is rather to elaborate on what the recurring debate about Zwarte Piet means to me, as an Italian white researcher who did part of her studies in the Netherlands. Actually: as someone who went to the Netherlands exactly to study the meaning of racism and all of that, thinking that I had a lot to learn from the Dutch (academics and everyone). And, I did learn a lot.

The time I spent in the Netherlands was the most intense time of my life in learning how to identify racism, how to talk about it, how to analyse it, how strip it down to its cultural, economic, historical structural components. I was amazed how in the Netherlands race issues were debated all over the place. Islamophobia was a particularly big issue (Theo Van Gogh was killed shortly after I arrived) but I also followed the campaign led by the Afro-Caribbean community around the slavery monument and the remembrance day with great interest. And people were also extensively talking about this Zwarte Piet issue, especially around this time of the year. At a personal level, it was during this time that I started to work on a research project on Black women workers which put me, for the first time in my life, in the position of being personally criticised on the basis of the fact that I am a White person.

It is from this standpoint that, for a moment, I want to try to understand why it is so difficult for the White Dutch to accept that their Zwarte Piet-tradition is against Blacks. I try to imagine their uneasiness, their discomfort, their frustration in having someone who comes and says ‘this is racist’, ‘you are racist’. I can understand that this is not nice. It is not a nice feeling to live with. Especially when you do not actually understand yourself as being racist, when you truly believe to have been misinterpreted. When you feel pressured to ask forgiveness for something you do not believe to be responsible for.

Andrea Smith brilliantly argues against the “ritual of confessing privilege” that White people often perform in anti-racist circles. This is the pretty codified procedure through which White people apologise for the privileged social position that they have inherited thanks to colonialism and structural racism. They need to prove to have struggled with it at the deepest intimate level. Only after this “ritual” they can start a meaningful conversation with Black, migrants and other racialised persons. Yet, Smith sees this emphasis on self-reflection as a false solution, because it allows the underlying social structure that enables privilege to remain untouched. We need to move from race-awareness as “individual self-improvement” to a “social movement for social transformation” through which to build a new future. A future that will be rich, inspiring and powerful, and where no one will have to fight over black-faced costumes.

This does not mean that self-reflection and the personal awareness of inequalities is not necessary. It is a crucial step. But we also need to go beyond this, and start talking collectively about what kind of world we want to live in, which changes we need to make in the global structures that determine our inequalities.

But here I am reminded of something that always amazed me about the Dutch. After WWII, instead of reconstructing the old buildings that were bombed, they just went on and created new ones. Skyscrapers, shopping malls, cinemas, new modern infrastructures. Coming from a city like Rome where the mantra is ‘preserve the old’, I envied the Dutch for their visionary, pragmatic, confident view on the future.

Why then, people in the Netherlands, Whites and Blacks and anyone else, do you not sit around a table and discuss the future that you want? The world you wish for your children and for your grandchildren. A world in which there are no symbol that hurt anyone. And if there is no place for Zwarte Piet in this beautiful new world, then please just do as you did with the old buildings: get rid of it. The future is now.

Sabrina Marchetti is Jean Monnet Fellow at the Robert Schuman Centre for Advanced Studies at the European University Institute (EUI). This is the third of four entries in a series on racism and Zwarte Piet on The GRaSe Blog, which we publish in the wake of the Saint Nicholas festivities. For the previous articles, see “The Colonial Hangover of The Netherlands“ and “Zwarte Piet and the Chimney Myth.”