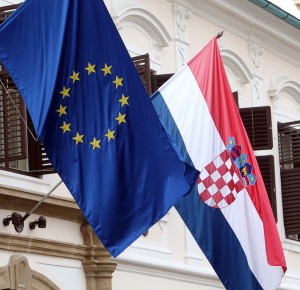 epa03029070 The flags of the European Union (L) and Croatia fly at the Croatian Government building in Zagreb, Croatia, 09 December 2011. Croatia and European Union member states on 09 December signed the treaty that will pave the way for the Balkan country to become the bloc’s 28th member on 01 July 2013. The ceremony took place on the sidelines of an EU summit dominated by the debt crisis plaguing the bloc’s common currency. EPA/ANTONIO BAT