EC Recommendation on Access to and Preservation of Scientific Information, in Support of Open Science

The European Commission published a new Recommendation on Access to, and Preservation of, Scientific Information on 25 April, to promote the transition to open science in the European Union. The recommendation provides guidance on incentives for openness; research data management; text and data mining; and technical standards for the re-use of research content. The European Commission published a roadmap for the European Open Science Cloud (EOSC) 14 March 2018. The EOSC is a “pan-European federation of research data infrastructures, with a view to moving from the current fragmentation, to a situation where data is easy to store, find, share and re-use.”

The 25 April EC recommendation calls upon member states to provide associated financial planning for open science, and to set concrete objectives and indicators to measure progress. The EC recommends that

Recommendation on Access to, and Preservation of, Scientific Information 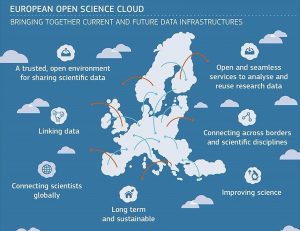