The Charter of Fundamental Rights of the European Union: the travaux préparatoires and selected documents

The Charter of Fundamental Rights of the European Union was proclaimed on 7 December 2000 and subsequently entered into force with the Treaty of Lisbon in December 2009. It contains 50 legally binding articles related to political, social, and economic rights and it applies to the institutions, bodies, offices and agencies of the Union and to its Member States when implementing European Union law.

On the occasion of the 20th anniversary of the EU Charter of Fundamental Rights, the European University Institute Library is pleased to announce the publication of the open access eBook “The Charter of Fundamental Rights of the European Union: the travaux préparatoires and selected documents” by Niall Coghlan and Marc Steiert, PhD researchers in the Law Department of the European University Institute. By sponsoring and supporting this publication the Library reaffirms its commitment to original research by scholars whose work relies on primary source materials and to open science making research available to the widest possible audience. 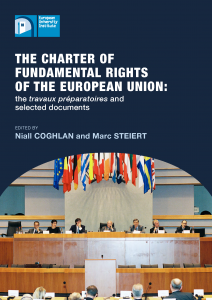 This open access eBook available via Cadmus, the EUI Research Repository, is an impressive publication of approximately 5,000 pages bringing together for the first time the complete travaux préparatoires from the Convention that drafted the Charter of Fundamental Rights of the European Union between 1999 and 2000. It includes some of the key documents shaping the roots of the Charter (such as the 1989 European Parliament Declaration) and showing how its text and primary law framing evolved between 2003 and 2014 (notably in the 2002-3 Future of Europe Convention and 2004 and 2007 Inter-Governmental Conferences). Furthermore, an analytical introduction, a detailed chronology of the Charter Convention as well as a complete and interlinked documents’ list assist the reader in navigating the material and make this work an accessible and searchable source when exploring the Charter’s drafting or seeking to determine the interpretation or purposes of a particular Charter provision.

Overall, this compilation should address the difficulty in accessing the Charter’s travaux préparatoires as one of the potential causes to the limited attention the Charter’s drafting has attracted so far. It therefore hopes to spark a fresh wave of scholarship on this drafting history and the history of fundamental rights in the EU more generally.

As the former Advocate General of the Court of Justice of the European Union, Eleanor Sharpston, states in her foreword to this eBook “That is why the present publication – over and above its obvious value to any researcher interested in the historical development of EU law – is so welcome. It is a meticulous and thorough compilation of material that you would otherwise spend weeks searching for (and most of us, most of the time, do not alas manage to find the time that would be required to do such searches). It will therefore be a valuable resource for anyone who wishes to make sure that a ‘Charter argument’ is solidly grounded. It may help us with the vexed question of what are ‘rights’ and what are ‘principles’. It will assuredly enable us all to have a better grasp of what the Charter was, and was not, intended by its progenitors to do for fundamental rights protection within the European Union.”

Marc Steiert and Niall Coghlan’s hard work consolidates a longstanding record of the European University Institute as an important knowledge hub in the field of fundamental right, as President Renaud Dehousse reminds in his foreword. Calling upon the Institute’s Academy of European Law under the leadership of Antonio Cassese, Joseph Weiler and Philip Alston, as well as the EUI’s works on the ‘constitutionalisation’ of the European Treaties under the direction of Giuliano Amato, President Dehousse illustrates how the EUI’s academic activities, projects and publications have contributed to a vibrant ‘intellectual and political environment that ultimately facilitated the adoption of the Charter of Fundamental Rights of the European Union.’

The authors of this book thus invite scholars and practitioners alike to return to the Charter’s origins in order to help sculpt its future.

More by the authors:
The forgotten birth of the Chart of Fundamental Rights https://eulawlive.com/weekend-edition/weekend-edition-no40/ (an article)
The Charter at 20: Returning to its origin as a critical juncture for fundamental rights protection in the EU https://europeanlawblog.eu/2020/12/07/the-charter-at-20-returning-to-its-origin-as-a-critical-juncture-for-fundamental-rights-protection-in-the-eu/ (a blog post)
A conversation on the drafting of the Charter https://eulawlive.com/podcast/celebrating-the-xxth-anniversary-of-the-charter-of-fundamental-rights-a-conversation-on-the-drafting-of-the-charter-with-niall-coghlan-and-marc-steiert/ (a podcast)