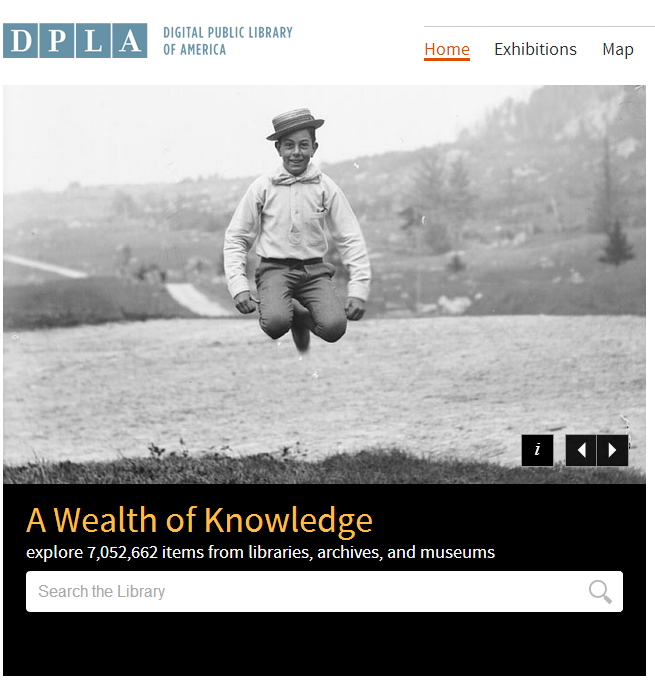 On April 18th 2014, the Digital Public Library of America’s celebrated its anniversary: a first year of public access on the web.

The DPLA is a platform that connects openly the online contents of many libraries, archives museums and cultural institutions around the USA into a single portal. Everybody can search this digital library and the digital bookshelf in the DPLA is now made of many thousands of single e-books titles from many different digital library partners in the USA.

From a user’s point of view, “DPLA offers a single point of access to millions of items from libraries, archives, and museums around the United States. Users can browse and search DPLA’s collections by timeline, map, virtual bookshelf, and faceted search; save and share customized lists of items; explore digital exhibitions; and interact with DPLA-powered apps in the app library.”

The most simple URL ever used on the web “dp.la”, is today an expanding digital library offering worldwide access to US open digital humanities culture. “The DPLA Digital Hubs Program is designed to establish a national network out of the over forty state/regional digital libraries and myriad large digital libraries in the US, bringing together digitized content from across the country into a single access point for end users, and an open platform for developers”. Because the DPLA also fosters collaboration with independent developers: the “DPLA’s application programming interface (API) and open data can be used by software developers, researchers, and others to create novel environments for learning, tools for discovery, and engaging apps”.

But the project started in October 2011 at the Berkman Center for Internet & Society, Harvard University, supported by the Alfred P. Sloan Foundation: “Hundreds of public and research librarians, innovators, digital humanists, and other volunteers—organized into six work-streams and led by a distinguished Steering Committee—helped to scope, design, and construct the DPLA.” The DPLA is guided by a Board of Directors “comprised of leading public and research librarians, technologists, intellectual property scholars, and business experts” from around the USA and is based in the 19th century building (1848) of the Boston Public Library. Today, former Director of the Roy Rosenzweig Center for History and New Media at George Mason University, pioneer Digital Historian Dan Cohen is DPLA Executive Director.  (DPLA staff page and Historical Materials page).

Very soon we may think that the DPLA together with  Europeana, the European Digital Library, will form the nucleus of a World Digital Public Library open to everybody in the world accessing the internet. 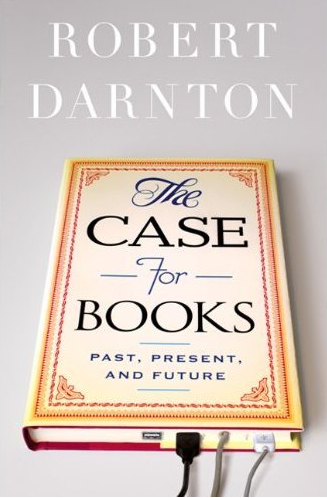 Already in November 2011, the “two major digital library networks have reached an agreement to collaborate in ways that will make a large part of the world’s cultural heritage available to a large part of the world’s population.” They both decided to work together to promote the “interoperability” of their meta-data’s.  Early Modern historian, author of The Case for Books, Robert Darnton -at that time member of the DPLA Steering Committee and University Librarian at the University of Harvard- said, “The association between the DPLA and Europeana means that users everywhere will eventually have access to the combined riches of the two systems at a single click. The aggregated databases will include many millions of books, pamphlets, newspapers, manuscripts, images, recordings,

On 8 February 2013, the Digital Public Library of America released a new version of its Metadata Application Profile (MAP): “This new version is designed to build on the experience of the Europeana Data Model (EDM)” allowing the sharing of the Europeana metadata model. “The DPLA and Europeana have also collaborated on a virtual exhibition, exploring the stories of Europeans migrating to the US: Leaving Europe: A New Life in America’ exhibition.videos, and other materials in many formats.” And Jill Cousins, Executive Director of Europeana, welcomed the agreement, saying that “Europeana was designed to be open and interoperable, and to be able to collaborate with the DPLA is a validation of that aim. By this combined effort on two continents, Europeana and the DPLA hope to promote the creation of a global network with partners from around the world.”

Looking at this important partnership we may say that more then the digital library contents, the richness and innovative peculiarity of the DPLA project embedded in the semantic Web 3.0, is based on metadata exchange, interoperability of metadata and, above all, on a full Open Access to all the DPLA metadata.

A recent post published by Megan Geuss, staff editor for the blog Ars Tecnica dedicated from 1998 to IT and Digital Technology issues in the USA (Digital Public Library of America to add millions of records to its archive) wrote that “the DPLA says that it has amassed more than seven million digitized items in its archives to date, and in 2013 attracted more than one million unique hits to its website. But the more impressive numbers come from the fact that the digital library made its metadata available to anyone. It reported today that over the year it received nine million hits to its API. Some of the apps that developers have made with the database include “a smartphone app called OpenPics that shows materials from DPLA related to the location where you are standing; a Pinterest-style app called Culture Collage that shows thumbnails of images related to a particular search on an endlessly scrolling page; and an app called FindDPLA that helps Wikipedia editors locate helpful primary sources to cite in their articles.” With third-party apps, the DPLA isn’t just a public library, it lets anyone build their own public library to suit their needs.“