One month left and Europe is getting ready for European Parliament elections in May. The EUI Library has selected the following articles and book publications on European elections. All works are either available in the Library or free on the web.

Abstract: European democracy is not in good shape. Despite the sustained increase in the powers of the European Parliament, rendering it a veritable co-legislator with the Council, voter turn-out to European elections has been in steady decline reaching a worrying nadir in 2009. The forthcoming elections offer an historical opportunity to ‘change the rules of the game.’ […]

Abstract:Substantial empirical evidence suggests that voters cast their ballot not only by considering the different policy positions of parties or candidates, but also appear to pull candidates/parties they prefer closer to their own ideal position (‘assimilation’) while pushing candidates/parties they dislike, farther away (‘contrast’). These effects are called ‘projection effects’ […]

Abstract: The European Election Survey (EES) is carried out in all member states at the time of each European Parliament election. The mode of data collection (mainly telephone interviews) and the sampling procedure (achieving 1,000 interviews in each country) raise doubts about the data quality […]

Preparing for the 2014 European elections: further enhancing their democratic and efficient conduct
by European Commission
COM(2013)126

Abstract:The 2014 European elections will be the first since the Lisbon Treaty entered into force. They will be all the more important as the European Union is taking major steps towards genuine Economic and Monetary Union, of which democratic legitimacy is a cornerstone […]

Abstract: Divided into four sections, experts begin by tracing the historical and political background of European Parliamentary elections, paying close attention to trends in turnout and the changing institutional role of the European Parliament (EP). Focusing mainly on the 2009 elections and using original data throughout, the next two sections are devoted to campaign communication strategies and the overall media coverage of EP elections in both established and newly-accessioned members of the European Union. The concluding section focuses on the macro- and micro-level effects of European parliamentary campaigns in a comparative perspective to illustrate how campaign strategies and media coverage were received by voters in EU member states.

Representation of women in second-order elections: the Czech Republic and Slovakia compared
by Jan Kovář & Kamil Kovář
Perspectives on European Politics and Society, 2014: 15(1)

Abstract: Elections to the European Parliament (EP) fall into the category of second-order national elections. In these types of elections voters behave differently when casting their vote. But what about political parties: do they behave differently in EP elections than in national parliamentary elections? This article draws on available electoral data related to women’s representation in the Czech Republic and Slovakia to explicitly link the second-order election (SOE) model to independent actions of political parties […]

Abstract: The European Election Survey (EES) is carried out in all member states at the time of each European Parliament election. The mode of data collection (mainly telephone interviews) and the sampling procedure (achieving 1,000 interviews in each country) raise doubts about the data quality. Until now knowledge has been lacking about the extent to which the mode of data collection and the sampling procedure bias the results. In one European country an independently designed election survey is carried out: The Swedish National European Parliament Election Study (SNES). The survey consists of face-to-face interviews of a random net sample of 2,682 individuals (response rate 67 per cent compared to 11.2 in the Swedish EES survey) […]

Abstract: The prospect of a rise by the far right parties in the upcoming European elections on May 2014 is feeding debate in the media and leading to fears that they may impede decisions within the Parliament and as a result, the functioning of the European Union. The aim of this paper is to assess the credibility of this scenario. To do this the ideological coherence of this political “family” will be analysed in order to gain a better understanding of the possibilities of the electoral progress of these parties in the European Parliament and the creation of a parliamentary group which would enable them to have greater influence over debates and defend their ideas more effectively. The hypothesis is that even though the rise to power of nationalist far right parties in these European elections is probable we should not overestimate their effect on the political balance of power in the future European Parliament.

Assessment of and lessons learnt during the 7th Legislature of the European Parliament 2009-2014
by Charles de Marcilly
European Issue, 2014: 308 (Robert Schuman Foundation)

Abstract: The European Parliament, one of the biggest democratic assemblies in the world, comprises at present 766 MEPs representing more than 505 million[2] people spread across 28 Member States. Since 1979 the European Parliament has been the only European Union institution to be elected directly by the citizens. It is also the only institution whose powers have continually grown as the treaties have been signed, notably since the Lisbon Treaty. Between 22nd and 25th May 2014 citizens are being called to appoint 751 MEPs who will represent them until 2019.This European Issue brings data published in the mid-mandate assessment of the 7th legislature of the European Parliament up to date[3]. The power struggles between political groups, a quantitative analysis of parliamentary work and action by national delegations are assessed in the first part before focus turns to major issues which have marked this mandate. 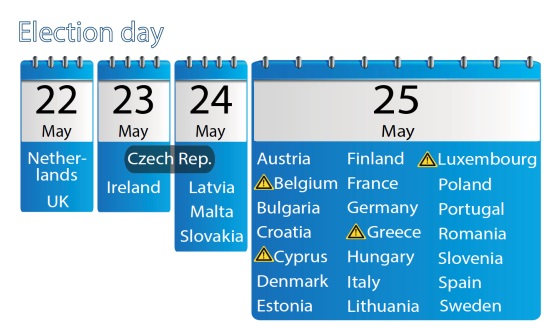