New Book: “European Commission 2004-2014: A Testimony by the President with selected documents” 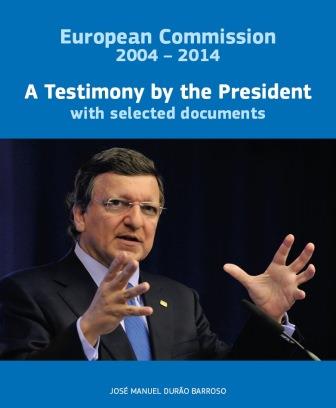 For the end of his mandate José Manuel Barroso published the book
“European Commission 2004-2014: A Testimony by the President with selected documents”

An extract from the introduction:

On 26 June 2004, the former Commissioner for External Relations, Chris Patten, described in a BBC interview the role of the President of the European Commission as ‘about as difficult a job as there is in the Western world’. After 10 years in the post, I think I can agree.
When I walked into the European Commission headquarters in the Berlaymont building in November 2004 to take up my responsibility as Commission President, I was certainly aware of how challenging it was, but could never have foreseen what lay ahead of us. Over these last 10 years, the EU has gone through the most difficult times in its history, with the rejection of the Constitutional Treaty by France and the Netherlands, a long period of low growth and, in several Member States, high unemployment, the financial crisis evolving into a sovereign debt crisis, constant instability in many governments and one of the most serious political and security crisis since the Cold War erupting with the conflict between Ukraine and Russia […]

The book can be downloaded from EU Bookshop and there are no printed copies available.

Read also the History and memories of the European Commission Blog.

Find out more on EU publications and documents at the European Documentation Centre pages.