The European Documentation Centre is part of the EUI Library since 1976 and is open to EUI researchers as well as to external users. It was conceived by the European Commission as one of the legal repositories across Europe of EU institutional publications and official documents. Its well-regarded collection ranges from official EU publications and documents to academic books on EU institutions; all the way up to unique holdings of an historic nature which complement the rich and well known archival assets of the Historical Archives of the European Union in Villa Salviati.

EDC provides information and expertise about the institutions, activities and policies of the European Union. For instance, despite the growing number of online databases and open EU sources of information available on the web, getting to the right EU documents still proves a difficult and sometimes impossible task. The reasons range from the unattainable number of documents which are not in the EU institutions’ registers and databases, including internal and/or classified documents, to the fragmented nature of sources and the transient nature of the web (where most EU documents get published, often only temporarily). Furthermore, working with EU documents requires not only inside knowledge of the EU policy cycle, as well as of the actors involved in the decision making process, but also networking with people within each institution who will facilitate access in accordance with the Transparency and Access to documents rules in place.

Ilaria Vianello, PhD 2016, EUI. ‘I wrote my PhD on the external action of the European Union and most of the EU’s internal documents are only accessible through a formal “access to documents” request. The network provided by the European Documentation Centre has proved very useful in obtaining internal documents, especially the ones which do not have a specific classification number.’

Camilla Mariotto, postdoc fellow at the University of Milan – Department of Social and Political Science. ‘Although the EU Institutions provide different databases for monitoring the EU decision-making process, in my case very few documents referred to the negotiations of the EU fiscal rules and of the Stability and Growth Pact. So I had to rely on other indirect sources. For scholars on EU affairs the best tool to collect information and news on the daily legislative activity of the EU institutions is Agence Europe. In Italy only the European University Institute has at its disposal the entire collection.
So last May, I went to the EUI and I got in touch with the responsible of the European Documentation Centre – Monica Steletti. She helped me more than I initially expected, since, besides explaining me how the platform of Agence Europe works, she conducted researches in grey literature and consulted the Commission’s and the Council’s registers for internal documents, also via informal channels. Surprisingly, her support continued even after my visiting period at EUI, and I could contact her whenever I needed additional documents. I am so enthusiastic and thankful to Monica that I would recommend (and I did!) any scholars interested in the EU to spend a visiting period at the European Documentation Center of the EUI and rely on her competence and professionalism.’ 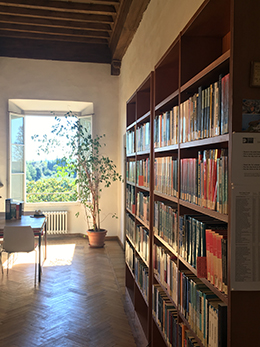