The long awaited ruling of the German Federal Constitutional Court on the constitutional validity of the  eurozone’s new permanent bailout fund, the European Stability Mechanism (ESM), was issued on September 12th and resulted in a conditional “yes” for the ESM and the Fiscal Compact. As you can read in the press release  and in the English extract of the decision: 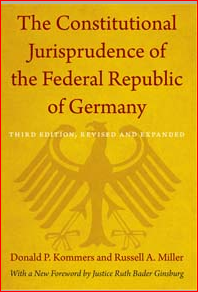 The growing importance of the German Federal Constitutional Court in the European arena is reflected as well in the many books published on the case law and the functioning of the court. The EUI Library’s holdings of legal books on the German Court are in various languages and go back to the 1970s. The publication of the third edition of Donald Kommers’ treatise “The Constitutional Jurisprudence of the Federal Republic of Germany” is expected in November, and coedited with Russell A. Miller. The Library has ordered a copy of this book.