History and memories of the European Commission 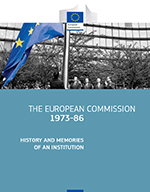 The European Commission 1973-86 : History and memories of an institution

Abstract: The 13 years which saw the enlargements of the European Communities to include Denmark, Ireland and the United Kingdom on 1 January 1973, Greece on 1 January 1981 and Spain and Portugal on 1 January 1986, and the signature of the Single European Act in February 1986, are often portrayed as a period of stagnation after the hopes raised by the The Hague Summit of December 1969. However, this volume — based on hitherto unpublished sources — shows that, despite the less propitious climate, the plans, ideas and changes initiated in the 1970s would set the scene for the fresh impetus given by the Single European Act and the upturn in the mid-1980s. A new sense of direction was thus breathed into a number of policies, including those on the internal market, innovation, research, regional policy, energy and the environment. Faced with the challenges of those years, it was up to the Commission, then the Commission of the European Communities, to drive the European project further and deeper, taking due account of the social and economic backdrop and seizing opportunities as and when they arose. Between 1973 and 1986, there were four Colleges and 45 commissioners. The institution itself had to adapt and introduce reforms in the wake of the successive enlargements and deepening integration, exemplified by the creation of the European Council and the strengthening of the powers of the European Parliament, whose members were elected by universal suffrage from 1979. Twenty-two professors or researchers from 15 universities joined forces to produce this work, under the coordination of the Université catholique de Louvain in Louvain-la-Neuve. They were granted privileged access to the Commission’s archives and were able to interview numerous former commissioners and officials who were working at the coalface at the time. A similar project had already resulted in the publication of a book about the institutions’ formative years between 1958 and 1972.

The European Commission 1958-72 : History and memories

Abstract: The ink on the Treaties of Rome of 25 March 1957 was hardly dry when the Commission set itself up for business on 1 January 1958 in Brussels with an agenda covering all areas of the economic life of the six founder countries: Germany, France, Italy and the three Benelux countries of Belgium, Luxembourg and the Netherlands. The 15-year period – from 1958 to 1972 – covered by this work corresponds to the beginnings of the European Commission, whose first task was to come up with practical means of achieving the treaties’ main objective – the establishment of a common market – taking as its point of departure the general interest of the entire Community of six Member States. Forged by men and women with often very different backgrounds, the history of the first few years is one of crises but also of achievements which shaped the major milestones of European integration in almost every area. Imagination, long-term vision, enthusiasm and tenacity seem to have been the great virtues of the people working for the young European institution at that time. By piecing together over a number of years the recollections of former Commission officials, a consortium of university teachers under the direction of Professor Michel Dumoulin of the Catholic University of Louvain at Louvain-la-Neuve has at last made it possible to tell the story of what happened during those early days. This is a new edition of the book originally published in 2007. A similar project has since resulted in the publication of a book about the history of the Commission between 1973 and 1986.

Are you looking for EU publications and documents? Visit the EU Information Research Guide and the European Documentation Centre pages or ask the EU information specialist, Evangelia Koundouraki