The New York Times International is the new title of the newspaper from 12 October. The paper version – available at the Badia café, Villa la Fonte and other campus locations – now carries an opinion piece on the front page “as well as expanded coverage of culture, travel and technology.” EUI members can also join the Library’s premium digital NYT subscription via this Catalogue record. From 12 October the domestic and international digital editions are merged. New tailored briefing services for Europe and Asia are due to be announced shortly.

EUI members can join the Library’s subscription to NYT.com full content services – using an EUI mail account – by following the instructions in this Catalogue record. The one-time registration must be done while on-campus. All International New York Times content can be accessed via tablet, smartphone and other mobile devices after registration. The digital version includes former International Herald Tribune content. Archival coverage is from 1851 to present (full details below). EUI members joining the Library subscription can also sign up for email newsletters, news digests, topic alerts, and use the ‘saved item’ dossiers. 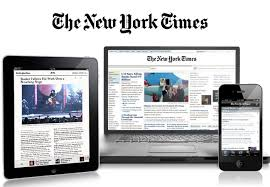 The digital archive of the New York Times, International Herald Tribune and International New York Times is a combined online resource with unlimited access to articles from 1851 to 1922, and from 1981 to 2016. Access to archival articles from 1923 to 1980 (TimesMachine) is limited to five articles per day, per user. The ‘Today’s Paper’ icon renders an e-facsimile of the paper layout, with click-through to article full texts.

EUI members also have access to the New York Times, 1945 to 2015, on microform – located on the garden floor of the Badia Library (MIC 17/18), and the text-only Factiva and Lexis Nexis Academic databases, which can be used for combined searching of the NYT and other digital news archives.

At the Badia Fiesolana, paper copies of Il Sole 24 Ore, Times Higher Education and The Economist are available at the Library issue desk. Paper copies of international newspapers are also available in the Badia café.

In the Economics Department (Villa La Fonte), paper copies of La Repubblica, the New York Times International and The Economist are available on the news rack in the villa dining hall.