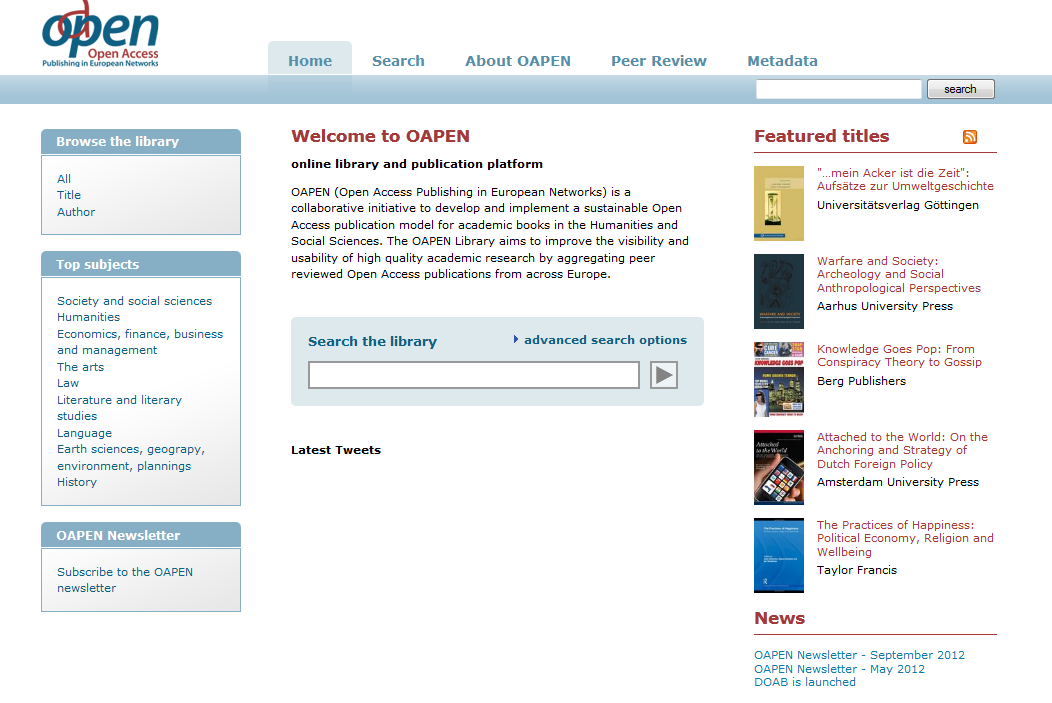 OAPEN is an online library and publication platform for scholarly books in the Humanities and Social Sciences.

APEN (Open Access Publishing in European Networks) is a collaborative initiative to develop and implement a sustainable Open Access publication model for academic books in the Humanities and Social Sciences. The OAPEN Library aims to improve the visibility and usability of high quality academic research by aggregating peer reviewed Open Access publications from across Europe.

The platform is the result of an agreement between several scholarly publishers that decided to publicize their commercially sold printed books using also OA for digital copies. They created a consortium -OAPEN- and accepted an economic model which would offer to authors and readers the possibility to meet easily thanks to publishers and university presses paying a fee to the consortium to maintain the platform. Doing so they spread knowledge in the Humanities and Social Science disciplines and they provide access to high quality contents in the same fields. Publishers accept to pay such a fee to the consortium to promote in the database their own front list titles and divide the costs of maintaining OA for everybody. Other publishers may join the project. Of course for academic authors writing books that have a restricted diffusion worldwide, this is the best way to promote their research and findings and todiscover better their selected public, connecting through OA to their potentially interested readers. OAPEN is also the result of a peerage process: “publishers or publishing entities (usually research institutes with their own publishing program) need to be predominantly academic publishers, which primarily means they should have proper and transparent procedures for peer review of manuscripts and it should be clear which publications are peer reviewed.”

A very important feature of the project is compatibility of their bibliographical meta-data’s with other databases. OAPEN wants to be fully interoperable with academic libraries and databases in general using some open meta-data’s formats to describe their OA eBooks. These data’s are in the public domain and could be used by anybody wishing to harvest them under a Creative Common license: it enables Libraries and Aggregators to use the metadata of all available titles of the OAPEN Library.

How to join ? Here are the official information available on the OAPEN website:

OAPEN combines the advantages of an independently operating commercial venture with the benefits of being embedded in the scholarly community. Joining the OAPEN network involves no membership costs, while giving you privileged access to information-sharing and lobbying that are an important part of the initiative. Listing your titles in the OAPEN Library involves a fee which starts at around €700, depending on the size of your frontlist, as well as the number of titles submitted to the OAPEN Library.

OAPEN is also open to cooperation with other partners, as long as their business goals are consistent with Open Access.