The EUI Library in 1976. Photo by Bruno R. Muscovich, Historical Archives of the European Union, EUI 687

So, what’s the news?

Fake news has been much in the real news recently but what’s new about that? Fake news has been around as long as the other sort of news but what has changed are the circumstances in which it is transmitted, which have put the existence of conventional newspapers themselves under threat. The sales of news-papers is dropping and so far no online newspaper has evolved a convincing sustainable business model whether based on paid subscriptions or revenue from advertising (or both as is usually the case).

Even as I write, this Jimmy Wales of Wikipedia has announced the setting-up of Wikitribune to host crowd-funded, collectively produced, evidence-based journalism that is not dependent on advertising.It was a different world when the EUI opened its door in 1976: the Library was located in the Refectory and in a photo from that period you can see a few newspapers strewn rather carelessly on a table.

They are most likely the precursors of the paper copies of newspapers to be found in the EUI’s now many buildings. In the 1980s there was only the Badia and EUI member states consisted of nine countries. Florence was a very isolated place: there was barely an airport and the standard mode of travel in continental Europe was by night-train. There was no internet and information was scarce, so to alleviate this isolation the Library subscribed to a range of European newspapers and magazines corresponding to the growing number of EUI’s member states. 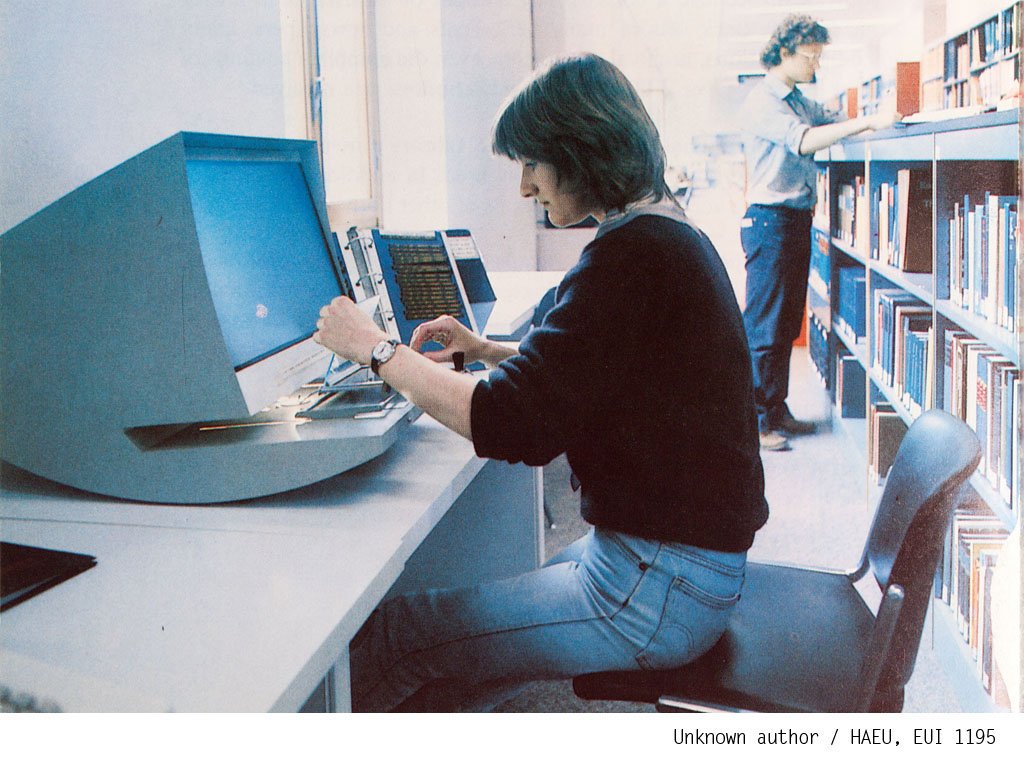 Microfilm reader at the Library in the 1990s

These purchases, expensive as they were, provided an essential service to the EUI community but did not result in re-usable research collections. At the end of the month, the paper copies were in such a state that they were simply thrown away. Until quite recently, there was a single exception to this: the Financial Times was such an important source for research that the Library purchased-copy was kept at the Loan Desk and had to be borrowed by readers for use in the Library. It was then stored downstairs for six months until the microfilm copy arrived, at which point the paper copies were disposed of.

Some readers will be asking: ‘What on earth is the microfilm copy? Is this some sort of 1980s spy story?’ Microfilm was the future once and for a Library such as the EUI that started with nothing in 1976, it was also the only practical means of rapidly acquiring a past. It was the quickest way to add depth to our tiny collections and extensive purchases were made in the following areas: back issues of major journals, specialised book collections, official documents and newspapers. The proactive policy of adding titles to both the throwaway collection and the microform research collection was continued until the 1990s. In the case of newspapers, subscriptions were continued until recently, as this was the only way of preserving for future scholars the precise image of the daily paper you would find in the local shop. But things were to change.

The impact of digitization alone (even leaving aside the impact of the internet) meant that social scientists were increasingly interested in the possibility of searching and analyzing large amounts of full text. The classic modus operandi of scrolling through a microfilm day by day perhaps helped by a manually compiled index for the paper (just to give an idea, the Index to The Times consists of 141 large volumes) was becoming outdated. However, libraries are conservative places and it was clear the that digital solutions on offer had their own problems and that CD ROMs containing large amounts of full text would run into problems of accessibility in the future. For the moment the Library continued to subscribe to microform versions of the paper edition, though this has been considerably scaled back in recent years.

Individual online subscriptions would seem to be the obvious solution but these are problematic (and expensive!). News organisations are not geared to offering campus-wide access to thousands of subscribers: negotiating our institutional license to the Financial Times took months and was in doubt until the last moment.

Nowadays the bulk of the EUI Library’s online news for research purposes is delivered by large aggregators: Factiva, Lexis-Nexis and Westlaw. These contain vast amounts of text from thousands of news sources varying from important national newspapers to specialised industry newsletters. Researchers can search within single newspapers or across geographic regions or by industrial sector and retrieve the full-text of the individual stories, but what they will not get is the context within which the original article was set, the pictures that accompanied the article or a sense of how important it was in that day’s edition. Even in this day and age of too much information, it seems that you can’t have everything.

An overview of the Library’s newspaper collections in all its various formats can be found on this dedicated web-page.