Zotero, a free and open-source reference management software for bibliographic data and research materials, was created at the Center for History and New Media (now Roy Rosenzweig CHNM) in Fairfax Virginia, USA. The project was initially funded by the Andrew W. Mellon Foundation, the Institute of Museum and Library Services and the Alfred P. Sloan Foundation. The initial release, Zotero 1.0, was made public in October 2006. 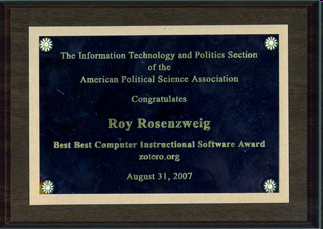 This new tool was invented by historians at George Mason University to address historians’ problems of dealing with file storage on their PCs and to provide individual scholars with a simple way of organising their bibliographies. Zotero soon became an international standard used not only by historians (it won the Political Science best software award in the USA in 2007 and 2008) but also in the traditional sciences, social sciences and in the humanities. Zotero’s interface has been translated into more than 30 languages.

Now standalone, Zotero 5.0 is well known and widely used worldwide. The EUI, fostering its introduction, already promoted Zotero in 2008. The innovative potential of Zotero was not

immediately understood back then. However, year after year the success of the software, both worldwide and at the EUI, also thanks to the introductory sessions to Zotero, convinced the EUI management of the importance and relevance of this software for supporting ongoing research activities. The software was installed in all EUI public computers by the ICT service and updated when Zotero (originally a plugin of the Mozilla Firefox browser became standalone in 2011) and today, became only available as a st

Zotero’s standard storage free capacity comprises 300 MB. In previous years an agreement between the RRHNM and the EUI allowed all @eui.eu users to access 2 GB of free storage. However in 2017, just before Christmas, we received an extraordinary gift form Fairfax: all @eui.eu users would receive unlimited storage capacity in the cloud at Mason! Unlimited storage is not only about space and capacity to synchronise your different computers with your Zotero library worldwide, but it completely changes your own research agenda. Zotero can now be used as a personal cloud library. Instead of filtering all the essays you download in PDF and other file types that you had previously kept outside your Zotero library, you can now integrate and index everything in one place. You will be able to access your own Zotero library from any computer worldwide! And this is great news indeed for all EUI members.